Rachel Boagey discovers why keeping on top of Adblue remains a vital part of managing your fleet. 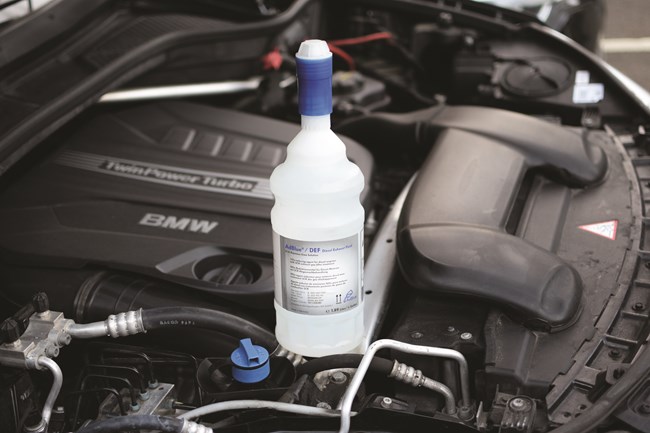 Diesel exhaust fluid, or Adblue, is of increasing importance to fleet operators all over the world. But according to the AA, the number of Adblue-related breakdowns almost doubled last year to 23,000 through a lack of understanding among drivers about the use of the additive.

Fleet owners operating diesel vehicles that require Adblue need to be aware that failing to plan ahead can have serious consequences. If the supply of Adblue runs out, the vehicle's selective catalytic reduction (SCR) system is unable to carry out the process of removing NOx from exhaust fumes.

Cars, vans and lorries with SCR systems are engineered to limit performance or shut down completely until the tank is refilled enough to continue without breaching stringent emissions limits. This can lead to fleet vehicles experiencing issues such as reduced power or being stranded at the roadside altogether.

Educating drivers of diesel vehicles about the importance and correct use of Adblue is essential as any damage incurred to vehicles due to the misuse of Adblue, or a breakdown caused by low levels, may not be covered by maintenance or breakdown agreements.

"Failure to offer guidance to drivers who are responsible for replenishing their own Adblue could cost fleets dearly if warning lights are ignored or Adblue is added to the fuel tank by mistake," explains Carlos Montero, chief commercial officer at FleetEurope. "Pouring it into a diesel fuel tank could cause irreparable damage if the engine is started or costly recovery charges to get the tank drained and the contents disposed of before it can be refilled.

"Adblue tends to be treated in a similar way to fuel by leasing companies and is not often covered by the vehicle maintenance contract, unless the service schedule states that the fluid needs to be changed.

"In many cases it is the responsibility of the driver themselves to cover the cost of topping up their Adblue between services. However, some employers may cover the cost of Adblue, allowing drivers to claim the cost back using their fuel cards or submitting it as part of their expenses." 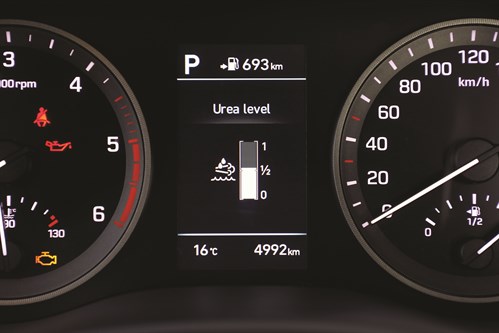 While some fuel cards enable fleet operators to check their overall expenditure on Adblue across their fleet, it is recommended that consumption costs via fuel cards and expense claims are regularly monitored and the data used to implement a fleet-wide Adblue policy to keep costs down to a minimum.

"If the employer is covering the cost of Adblue top-ups, it is important that their drivers understand the policy for refilling to avoid any excessive charges," says Montero. "The approximate cost of filling a tank can vary significantly from around £15, when drivers purchase the Adblue from retailers and fill the tank themselves, to paying as much as £100, including labour charges, when it is refilled by a maintenance provider."

Large commercial fleets will get the best value when buying Adblue in bulk, usually in the form of an intermediate bulk container (IBC) or a large tank that can be delivered and stored at their depot. Operators need to ensure they choose the official product, as inferior generic solutions carry the risk of engine damage for diesel vehicles.

The frequency of topping up Adblue will vary depending on the make and model of vehicle and how efficiently it is driven. The majority of diesel drivers will need to refill their Adblue tanks at least once between each service. The range between refills is estimated to be somewhere between 3,000 and 12,000 miles, with typical consumption being anything from around one litre of Adblue every 350 to 600 miles.

While Adblue should be a consideration for fleet managers, if managed correctly the costs can be quite low, explains Guy Mason, operations director at Lex Autolease.

"If drivers fill up themselves, a top-up of Adblue will cost in the region of £20, which equates to as little as 0.3 pence per mile," he says. "In comparison, paying a garage for an Adblue top-up can cost anywhere between £60 and £90, which can equate to more than one penny per mile. The key to keeping costs under control is to have a robust policy in place that ensures employees top up in a cost-effective manner."

Mason explains that, over the last three to four years, Lex has only be made aware of one or two instances where the Adblue warning system has been ignored and the driver has been unable to restart their vehicle as a result. 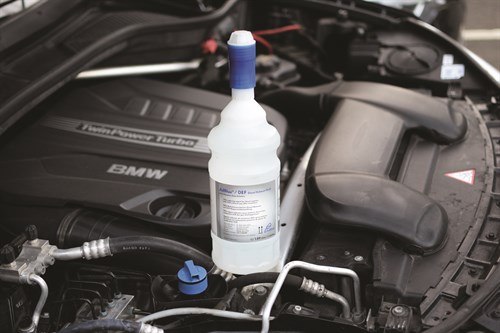 "However, with the number of Adblue-related breakdowns nationwide on the rise, it is clear to see that there is a lack of understanding among drivers," he says.

The AA's recovery service is seeing a rapid growth in breakdowns due to accidental misuse of, or lack of understanding of the need for, Adblue. The AA dealt with more than 23,000 breakdowns linked to Adblue in 2017 -almost twice the total for the previous year.

"Many drivers call for help because they can't start their car simply because the Adblue tank has run dry," says Stuart Thomas, director of fleet and SME at the AA. "We have also attended at least one driver who filled their diesel tank
with Adblue.

"Individual drivers often don't understand how to use Adblue or appreciate the role it has to play in terms of emissions reductions. This is a particular issue for those who don't regularly drive a diesel car - hire and fleet car drivers, for example.

"If your fleet contains vehicles from Jaguar, Land Rover or any French or German manufacturer which were registered after September 2015, it will use Adblue, and your drivers will need to know how to use it correctly."

"As a consumable similar to fuel, it is the driver's responsibility to ensure the tank is kept topped up and to pay any costs associated with doing so," he says.

For example, if Adblue is poured directly into the fuel tank it can cause expensive damage to both the fuel pump and the injection system. If the mistake is spotted before the engine is started, the tank will require flushing out and refilling with diesel in the same way as if petrol had accidentally been put into the tank. But if the engine is started it could become an expensive write-off, with the associated inconvenience and cost of a replacement vehicle.

"Educating drivers on correctly managing the Adblue replenishment process is vital, as a breakdown resulting from low Adblue levels won't be covered under leasing agreements, and all associated costs will be assumed by the business affected," says Thomas.

The general lack of understanding by drivers of Adblue can pose a serious risk, especially if the dashboard warning lights are ignored, says Montero.

"Most vehicles will warn drivers to top up the Adblue tank at least 1,000 miles before it is empty by way of a text message or warning light on the dashboard," he says.

"If the warning is ignored and the Adblue tank runs empty, the engine's performance is reduced to limit its emissions. Once the vehicle stops, the driver will be unable to restart the vehicle until the tank is refilled, putting them and other road users at risk if they break down on a busy road or motorway."

Following the Government's pledge to ban the sale of new petrol and diesel cars by 2040, it is clear that diesel cars and their use of Adblue will be gradually phased out.  Until then, the latest Euro 6 models will continue to play an important role in the overall fleet mix, especially for high mileage fleets, says Montero.

"They offer drivers fuel efficiency, tax advantages and have been shown to emit 85-90% less NOx than the previous Euro 5 diesel vehicles," he says.

FleetEurope's advice to fleet operators is to educate their diesel drivers about Adblue and include a dedicated section about it within their current fleet policy.

"Drivers need to know what it is, why it is so important, who is responsible for procuring and maintaining it, where best to purchase it, how to administer it correctly and the consequences of misusing or ignoring it," says Montero.

The number of vehicles fitted with Adblue technology will continue to increase, and its management will remain part of the role of every manager operating a diesel fleet, Thomas explains.

"The implications of not managing these vehicles - and their drivers - correctly, and failing to provide training on the proper usage of Adblue, in terms of impact on a fleet's bottom line, are very clear," he says.

More vehicles are set to rely on Adblue technology to continue to meet tightening emissions standards.  The AA's recent 2018 Operational Fleet Report, conducted in partnership with BT Fleet, revealed diesel is still the fuel of choice for most fleets.

"This means the number of cars relying on Adblue technology is only set to increase in the short and medium terms, so its importance cannot be ignored," Thomas explains. "This is especially the case given the imminent wider introduction of ultra-low emissions zones and clean air zones, as cars entering these areas will have to comply with Euro 6 or face the prospect of swingeing fines and penalties.

"There is a school of thought that believes Euro 7, when introduced, will focus more on petrol vehicles than diesel. The EU has the objective of reducing CO2 emissions to an average of 98g/km by 2020 and diesel vehicles emit relatively little CO2 compared with petrol vehicles, although petrol hybrids do perform better in this area. With diesel particulate filter technology only likely to improve further to address calls to reduce particulate emissions, it may be that in the longer term, Adblue may become less relevant. Those days seem some way
off, however."

Lex's Mason agrees, saying: "Adblue has been a requirement in many new diesel vehicles for more than four years now, with drivers and operators becoming increasingly used to topping-up as needed. Despite the added costs of Adblue, diesel is often still the best fuel option for drivers undertaking frequent, high-mileage motorway journeys - we continue to advocate the 'right vehicle for the right job' message."