Half of all Audi's new PHEVs will go to business drivers - and there are a lot coming. Guy Bird drives a few and reports on the brand's latest electric plans. 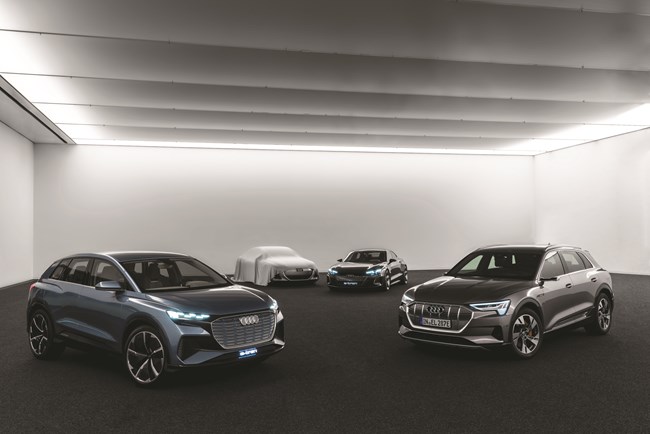 Within a year Audi will offer seven new plug-in petrol-electric hybrid models, representing 'phase one' of a roll-out that will see 30 electrified cars by 2025, of which 20 will be full EVs.

By 2025, Audi expects these models to account for 40% of its total worldwide sales, helping cut its emissions by 30% compared with 2015 levels and reduce the impact of looming CO2 fleet average EU fines in 2021. In another 20 years, Audi aims to be CO2 neutral in all parts of its business, as Katharina Schneider, responsible for Audi's brand strategy, told media in Munich last month.

"By 2050 at the latest, we want to be CO2-neutral," she declared. "There is no alternative, and across the whole supply chain - manufacturing, operations and recycling."

At the same event journalists were stripped of their cameras and mobile phones, and taken to a darkened room to be shown four electrified Audi models. Three were cars previously unveiled at motorshows - the Q4 E-Tron and E-Tron GT concepts, and the E-Tron 55 quattro SUV production EV - plus a mystery fourth prototype, which in Audi's official pictures appears partially cloaked (see main image above). Roughly the size of an A7, the four-door coupe is significant in that it sits on a new scalable premium electric platform dubbed PPE and previews a possible future face for Audi, featuring a smooth and body-coloured closed grille plus slimmer lights.

According Audi national fleet sales manager Glenn Stanton, business customers are expected to take about half of the brand's PHEV sales, no doubt due to the considerable CO2 improvements these cars record compared with petrol and diesel-only equivalents, to the benefit of CO2-related company car BIK tax bands (not withstanding their hefty price premiums). A Q5 50 TFSI E quattro PHEV is £5,000 more than a Q5 45 TFSI quattro, but instantly offers a BIK rating 21 tax bands better (16% versus 37%).

As a stop-gap before more full-electric cars arrive and the associated charging infrastructure required ramps up, Audi's PHEV range provides some benefits, but compared with Mercedes' new PHEVs, the Q5's electric-only range of 26 miles and CO2 rating of 49g/km seems off the pace compared with the Mercedes A250 e (42 miles and 34g/km) or indeed the much larger diesel-electric hybrid GLE de SUV (60 miles and 29g/km).

If you want the tax breaks, do low daily mileage in urban areas and plug-in regularly, perhaps they are worth considering. Otherwise, Audi's excellent TDI units are surely still the real-world answer, for eco and economy reasons.

Sample drives of Audi's latest petrol-electric plug-in hybrids last month - from A8 to Q7 and Q5 - revealed great integration and transition between electric and petrol propulsion. The 449hp A8L 60 TSFI e quattro in particular felt amazingly rapid, able to stay in EV mode up to 84mph, and all the while maintaining a serene and luxurious ride.

Different driving modes are available within the Audi PHEV range and affect the accelerator pedal's kick-down point, where the petrol engine takes over from electric-only driving. In Sport mode the accelerator only has to be depressed to 40% of its potential travel to get the petrol engine to kick-in, while in Efficiency mode the pedal has to be pushed to 90%. In other words, a light driver's foot will keep things electric for longer. In top-selling Q5 guise, the new 50 TFSI e 299hp PHEV offers 26 miles of electric range, a 49g/km CO2 rating (equating to a low 16% BIK rate), plus a WLTP min-max combined mpg of 32.1-34. AC charging to a maximum of 7.4kW means plugging in the car overnight via regular sources will ensure a topped up battery the next day.

In summary, driving an Audi PHEV involves no compromise compared with a regular combustion-engined car - aside from a smaller boot space (395 versus 550 litres) - and as long as your average daily commutes are short and you can plug-in easily at one end of the journey, you will gain eco benefits. Otherwise, you will just be paying a large premium for the PHEVs' (admittedly significant) BIK tax breaks.