Rachel Boagey attends the Acfo spring seminar in Gaydon where delegates discuss the future of the company car and its important role in the government's Road to Zero Strategy. 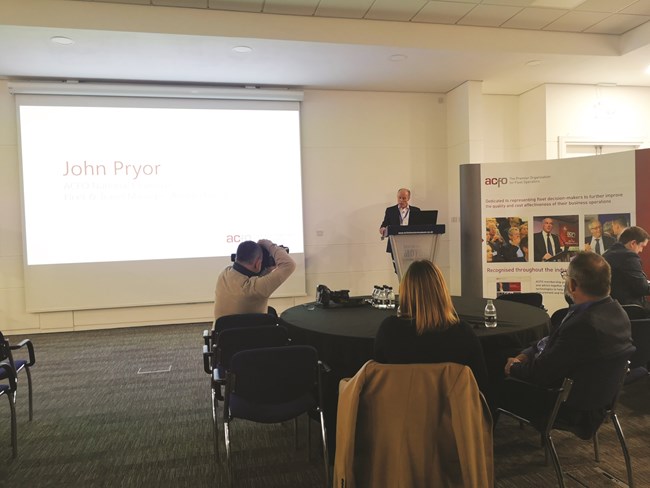 Fleet managers have a hugely influential role to play in promoting the uptake of company cars if the government is to achieve its environmentally focused Road to Zero Strategy.

This was the main message at Acfo's spring seminar entitled 'Another Year of Evolution', held at the British Motor Museum in Gaydon, where attendees were told by delegates the importance of fleet managers pushing company cars to ensure the government meets its green targets.

Ashley Barnett, head of fleet consultancy at Lex Autolease, explained that a growing number of cash takers have triggered among fleet managers a loss of control and influence over vehicle-related decision-making that not only conflicts with government strategy but also with employers' own sustainability agendas.

Barnett said fleets should be identifying their future fleet strategy to understand why their organisation offers a car or cash benefit, enabling them to decipher what the company car benefit should look like in the future in line with their objectives.

"Fleet managers should question why their organisation offers a cash or car option and because it had always been available did not mean that it should be continued," said Barnett. "If a business has a policy around sustainability, you don't want a car policy that is at odds with it."

The government is very clear on its Road to Zero Strategy and has 31 years to achieve its aim.

"That is seven car replacement cycles, and fleet managers have the ability to influence change today," said Barnett.

Highlighting that developing a sustainable fleet policy offered "immense challenges but also immense opportunities", delegates urged fleet managers "to be an active participant in change and not a victim".

John Pryor, Acfo chairman, explained: "With the current climate including changes such as low emission zones, changes in the working environment and Brexit, the role of bodies such as Acfo and ICFM has never been more important."

He continued: "Government is clearly unable to set the agenda on climate change and it is we who have to take up that mantle and help lead the changes needed by working together."

Explaining that Lex Autolease had met with HM Treasury officials and provided data on actions the company's fleet customers were taking in relation to company car BIK tax rises, Barnett said he believed "they were listening".

With the government continuing to review the shape of future company car BIK taxation from April 2020 ahead of an anticipated summer announcement, Barnett highlighted that fleet uptake of plug-in vehicles was "way behind the curve" required to meet official targets.

"Fleet managers have the ability to influence change, but it is not about changing the fleet all in one go," he said. "We can all see that tax is rising, and the government wants cars to be at the bottom end of the tax structure in terms of emission levels."

Delegates addressed the issue that employees in increasing numbers are said to be opting to take cash in lieu of a company car amid year-on-year rises in BIK taxation. But with many then driving 10-year-old vehicles, that trend is counter-productive to the government's air quality programme and its aim to ensure that by 2050 almost every car and van on the roads is emissions-free.

Mike Moore, senior manager at Deloitte, explained: "We are seeing the rise of cash as an option for employees due to tax rises for the company car, and many companies are moving for it if the employees don't need it for their business. In this case, it is vital to ensure that there is a duty of care for employers and that they are not in breach of the corporate responsibility by letting employees drive their own cars.

"I don't think getting rid of the company car is an answer for all drivers and it may come with unintended consequences."

Another topic that dominated the conversation at the seminar was diesel, with delegates saying the fuel has a key role to play in fleets, but that the government must 'play fair' on tax.

Scott Dickens, sales director at Jaguar Land Rover (JLR) explained that the "demonisation of diesel" in sections of the media had "destabilised" the market, with sales slumping, and said: "The government has not been in control. Consumers have been supplied with lots of misinformation."

"We here at JLR believe the ICE engine has a life," explained sales director Scott Dickens. "There is also a huge significant role for diesel over the next decade as well, so we will continue with the fuel for our customers."

He continued: "There doesn't seem to have been a very positive response to significantly counteract the bad press diesel has received recently. The industry has been too passive, but we believe we can dial up the education and put the facts on the table."

Highlighting that company car drivers selecting a new diesel model now paid a 4% tax supplement if it did not comply with the RDE2 standard (almost every diesel car available does not), Dickens said: "The unintended consequence of government policy is customers are paying more tax, when the intent should be to change behaviour without paying more."