Fleet safety 'not a one person job'

Getting wider management teams on board with driver safety was one of the hot topics at Brake's Fleet Safety Conference 2019, alongside driver fatigue and mental health. Sean Keywood reports. 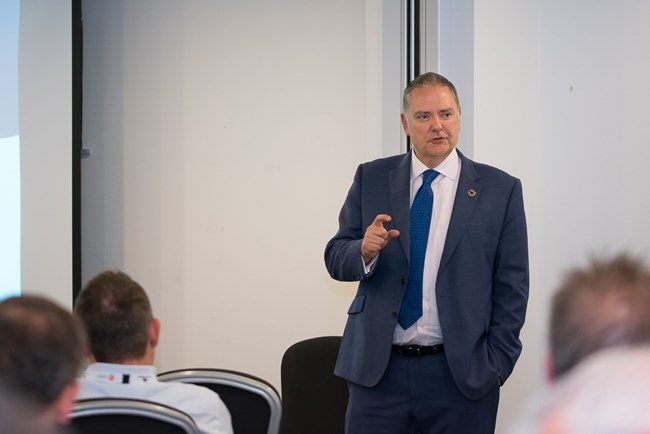 Fleet managers must get drivers' line managers involved if they want to implement a successful road safety policy at their organisation.

Speaking at the event, Price explained that however determined fleet managers were to keep their drivers safe, they couldn't do it on their own.

Sharing what he said were the key success factors for successfully implementing a fleet safety policy, he told delegates: "The first is management. I am not talking about strong leadership here - it is the line managers, the controlling mind of the drivers.

"Because what you want to do is create a safety and operational balance so that there is nothing the organisation is doing that may compromise the ability of the driver to drive safely.

"That involves training your line managers - and I would argue if you are going to do some training, train the line managers first before doing anything at the driver level - to understand their roles and responsibilities about managing risk, and get them engaged and involved on a day-to-day basis."

Arguing that fleet safety management is not a single person job, Price said that, especially in a large organisation, line manager involvement was crucial.

He added: "As an example, the line managers should be the people doing the personal incident debriefs, and asking themselves the difficult but really important question - what have we done as an organisation that may have contributed to this person having a crash?

"Because often people go straight down the route of 'Well, the driver's made an error'. Unless they understand the underlying root cause, which is often at a management or operational level, then nothing is going to change."

Price suggested that, for instance, a driver might be breaking the speed limit because they haven't yet made their sales targets for that month.

He said: "Often when I am working with customers, I am not saying, 'This safety policy needs to be enhanced here, here and here', but actually you just need to change the way you do business slightly, to allow drivers to drive safely."

Price said another key success factor was making sure that, since drivers tend to overestimate their own driving ability, they did not simply assume safety messages did not apply to them, which he said required an effective communication strategy.

Another speaker at the conference was road safety consultant Andrew Drewary, who discussed driver fatigue.

He said fleets should have a specific fatigue policy, and that drivers should be educated about the importance of rest breaks, while managers should ensure they were not rushed to keep up with unrealistic appointment or delivery schedules.

He said: "When I had a team I ensured all their rest breaks were detailed in their diary planning. It was up to them to take it, but if something happened I could prove as an employer I had taken everything into account to give them 15 minutes rest after two hours' driving."

Drewary said managers should know to look out for signs of fatigue, and to raise them with drivers at the right time and in the right way.

He said firms should also have contingency plans in place in case drivers were too tired to drive.

"If one of your drivers has a problem and falls asleep, or pulls over and says I can't drive anymore, I am absolutely shattered, what are you going to do?," he said.

"You have got a duty of care to look after your employee while they arere out on the road."

Also speaking at the conference, TRL psychologist Rebecca Posner offered advice to fleets on prioritising drivers' mental health, including raising concerns about how some might be using telematics systems to single drivers out, when they could have personal issues affecting their driving.

She said: "I have heard horror stories about using dash cams to name and shame, putting them up in the office lobby as what not to do. The impact on that person's mental health - I don't even want to think about it.

"Other companies say if they notice someone driving differently, they bring them in for a cup of tea and ask if everything is fine. If you do that you are more likely to get to the root cause of why they are behaving that way."