The manufacturer says that rather than committing to one version of hybrid power, a multi-faceted approach is the best way to meet every driver's requirements. Sean Keywood reports.

Ford has unveiled an approach to electrified vehicles (EVs) based around several different types of hybrid and fully electric powertrains, as it seeks to make up lost ground against other mainstream vehicle manufacturers in Europe.

At the company's Go Further conference in Amsterdam, it explained how it finally intends to get to grips with a move towards electrification, which it says will see more than half of vehicles sold being electric within ten years.

Its most immediate response to this comprises three different types of hybrid - mild hybrid, conventional hybrid (as already seen in the Mondeo), and plug-in hybrid.

All three of these powertrains will be offered with the new Kuga, while mild hybrid will be made available next year with the Fiesta and Focus, and conventional hybrid will continue in the Mondeo.

Mild hybrid power will also be available in the new Puma (pictured above) - an SUV announced at the event, which will sit between the Ecosport and Kuga in Ford's line-up, and is due to arrive by the end of the year.

Various electrified vans, and a hybrid Explorer SUV that won't come to the UK, were also announced.

Ford of Europe chairman Steven Armstrong said the manufacturer's aim was to provide every driver with an electrified car that was right for them.

He said: "The options are expanding at such rapid speeds that consumers are looking for the right path.

"They don't want to be blinded by the technology, they want vehicles that simply make their lives better now, and in a way that is easily attainable and highly enjoyable.

"When we talk to them about their real needs, what we find is that there is a level of electrification to suit everyone."

Armstrong claimed that Ford would be offering "an attainable electrified option for every single Ford name plate".

He continued: "It will be one of the most comprehensive and compelling line-ups in our industry, one that few can match, and only Ford can deliver.

"While many manufacturers have committed themselves to just one type of electrified solution, we are investing in an entire family of hybrid powertrains - as well, of course, as full electric vehicles.

"We have looked at the size and function of every single one of our vehicles, and analysed how customers intend to use them, so we can offer the best electrified option for the job."

The mild hybrid system, which pairs an internal combustion engine with a 48V battery pack, features a belt-driven integrated starter/generator instead of a regular alternator, which means the battery can be charged using energy recovered when the car is braking or coasting.

This energy is then used to provide torque assistance during normal driving and acceleration, as well as running the car's electrical ancillaries.

Ford says the system delivers punchier, more responsive performance, and allows a larger turbocharger to be fitted to the engine as it mitigates turbo-lag.

The conventional hybrid, as popularised by the likes of the Toyota Prius, features an internal combustion engine and an electric motor, and is capable of running on either individually, or both together.

The plug-in hybrid system features a similar set-up, but one where the battery can be charged via a cable, allowing for more than 31 miles of pure-electric range in the case of the Kuga.

While the Mondeo has been available as a four-door saloon hybrid since 2015, this powertrain is now also being offered with an estate, and Ford announced in Amsterdam that both body styles will also be available in the sports-inspired ST-Line equipment grade (pictured below) later this year. 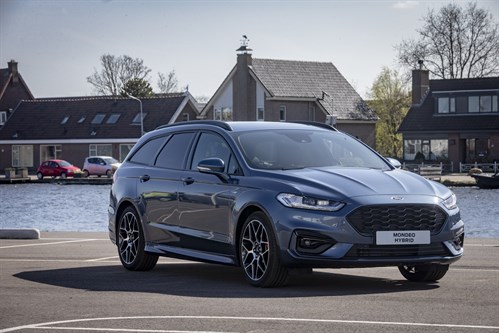 Ford of Europe vice-president of marketing, sales and service Roelant de Waard said this was in response to increased demand from drivers for high-end grades, which formed 70% of its sales last year.

The mild hybrid Fiesta and Focus will both feature the 48V battery paired with a 1.0-litre petrol engine, producing a combined 155hp.

Ford is also planning to launch a pure electric SUV next year, although this will be a high-performance model inspired by the Mustang sports car.

But the future isn't solely about electrification for Ford. According to Armstrong, it forms just one of what he described as "three principle enablers to the future world of mobility", with another being "intelligent networked vehicles".

He said: "This will allow us to deliver new smart services that make life on the road easier and more efficient.

"Cars that tell the drivers where the closest parking spaces are, for example, and apps that tell fleet managers the exact location of their vans in real time."

"This is a world first - it is an open cloud-based platform that will enable us to orchestrate smooth flow of intelligent cars through our cities and our road systems," he said.