Geneva show heralds the year of the EV

More electric cars than ever made their debuts at the Geneva motor show this month. Rachel Boagey and Simon Harris report from the show. 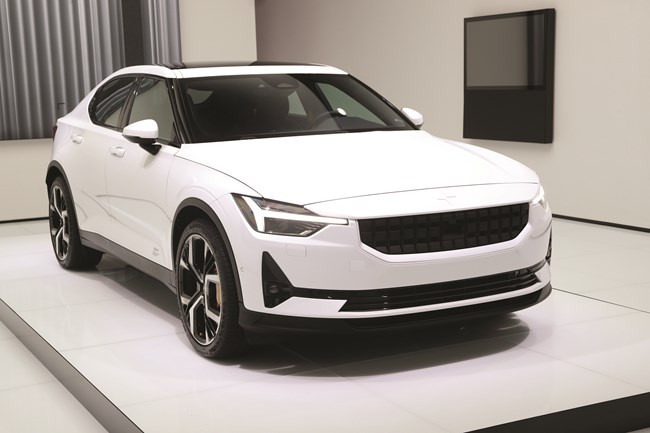 To begin with, the Geneva motor show could have turned out to be an anti-climax.

Four major manufacturers were either absent or withheld one or more of their brands from the show.

For UK observers this was significant. No-shows included Ford, Vauxhall, Jaguar Land Rover and Volvo. The first three in particular take a considerably greater share of the UK car market than across the whole of Europe.

In fact, those three missing brands made up less than 16% of car sales across Europe in 2018, while those at the show would have welcomed a greater share of the action.

And although Volvo missed Geneva, its upmarket performance brand Polestar used it to show a new all-electric vehicle, the Polestar 2 (pictured above).

There were more electric and plug-in cars on display - production ready, outlandish concepts, and concepts that looked very close to production cars - than we can remember at a Geneva show.

There are two drivers behind this. One is a genuine increasing appetite for electric vehicles (EVs) among car buyers - although EV registrations are still tiny compared with conventional petrol and diesel cars.

The other is the impending change to EU-wide rules on CO2 emissions. Manufacturers will see a lower threshold for their average fleets among new car registrations from 2021.

Essentially, they will need to sell enough cars with emissions less than 95g/km to offset the number they sell above 95g/km.

Honda took a step closer to its first electric car in Europe with the E-Prototype.

Honda UK managing director David Hodgetts said: "We are announcing here today that by 2025 100% of our models will be electrified. This is quite a big change from two years ago but it is a target we need to begin working towards because in Europe the legislation is a lot tighter than in other countries."

Honda recently announced it will end production at its Swindon plant in 2021, and UK head of cars Phil Webb told us the production of all of the manufacturer's cars moving to Japan should not affect UK supply.

"We will actually be able keep ahead of the CO2 regulations and will be at the front of the queue with new models coming over from Japan," he said. "They will now be shipped to Europe first, rather than the previous CR-V, which was available in the US a good 18 months before we had it here."

Hodgetts explained that models like the new CR-V Hybrid were making a stronger case for alternative fuels and confirmed that the next generation of Civic, due in around 2021-22, would also be available as a hybrid.

He also said that, for the moment, diesel is still important in the strategy to reduce overall CO2 emissions in line with the EU targets.

Seat managing director Richard Harrison said: "The El-Born will be the second Volkswagen Group product to market from the new MEB platform, while the Cupra Formentor helps us build a sub-brand with a degree of uniqueness. It will have an emphasis on fun, but also on environmental responsibility. They will ensure we are at the forefront of where trends are going."

He also sounded a note of caution that the charging infrastructure needed to be ready for increased uptake of plug-in cars.

"Infrastructure now needs to keep pace with vehicle introductions," he said. "The El-Born will make range anxiety a thing of the past, and growth will accelerate, while the new Leon and the Formentor will have plug-in hybrid variants, and we have an electric Mii coming out in 2020."

EV pioneer Nissan, which has now had eight years of experience of selling electric cars and vans with the Leaf and the e-NV200, said it was ready to implement the next stage of its electrification strategy.

Gareth Dunsmore, electric vehicles director at Nissan Europe, said: "We need to electrify our whole line-up, and our E-Power strategy will deliver more performance as well as give customers more choice.

"Our corporate sales teams have a lot of EV knowledge to share now, the Leaf is built on the same line as the Qashqai, and we produce our own batteries. We invest in infrastructure ourselves. EV customers are the most satisfied of all car customers.

"The vast majority of journeys are still less than 35 miles a day, for which charging would take three to four hours. Rapid chargers can be placed at hotels and other strategic sites. Hotels are already switched on to sustainability, so it shouldn't take much to get them on board."

Dunsmore said working in partnership with Mitsubishi, another EV pioneer that has also had great success with plug-in hybrids, should deliver results.

"Being in an alliance with Renault and Mitsubishi will help give us scale and reduce costs,' he said.

"Consumers are given very little information about EV benefits, but word of mouth of current users is important, and useful in changing perceptions.

"Infrastructure is still an issue in some places. So things like supermarkets offering top-ups while customers shop is great, and a great advertisement for EVs."

Mitsubishi premiered the Engelberg PHEV concept (pictured below) alongside its production Outlander PHEV, with the former likely to morph into a replacement for the latter. 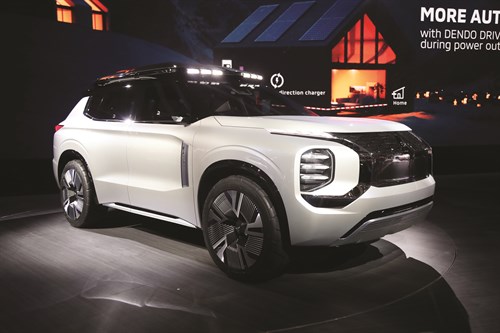 Rob Lindley, managing director of Mitsubishi in the UK, told us the manufacturer is aiming for 50,000 cars and LCVs in the next five years, almost 20,000 more than it is selling at the moment.

"Last year with passenger cars we were the fastest-growing big brand in the UK," Lindley said. "We have lots of new products here today and they are a big pillar of our growth strategy, alongside dealer network investment and brand investment."

Mitsubishi is keen to exploit its relationship with Nissan and Renault for growth but also for its electrification strategy, with an eye on tightening emissions regulations, said Lindley.

"Mitsubishi as a standalone brand with 1.2 million cars sounds a lot, but in today's world the investments we need to make in electrification technologies and powertrains and new platforms is so huge that it would be very difficult to do that as a standalone brand and keep it consistent with the level of change and legislation in the market."

"Electrification is absolutely critically important for us. I think when you see concept cars such as the Engelberg here at the show you can assume it is going to go into production at some stage. The market is quite small right now, but there is a big push and there is no question whether CAFE emissions led or consumer demand led, manufactures have to get ready for it."

One lower-profile manufacturer (but with no less ambition than the bigger players) didn't have an EV on display, but confirmed there would be an electrified version of the new car on its stand. The Ssangyong Korando will be available with petrol and diesel engines when it is launched in the second half of the year, but there will be an all-electric version next year.

The brand, owned by Mahindra & Mahindra (an Indian multinational car manufacturer) since 2011, has benefitted from huge investment in R&D and new products in recent years.

Nick Laird, managing director of Ssangyong UK, said: "We will launch our EV in Q2 of 2020. We are still discussing specification with Korea, but we will be aiming for a range of 270-280 miles, with the motor more calibrated for range than performance.

"In terms of our brand perception, we are relatively unknown, but this will matter much less with EVs.

"We will have new dealer recruits, some of which may be in urban areas, and may already have had partnerships with brands that sold electrified cars."

Given how much progress the other Korean brands have made in alternative fuels in a relatively short time, with both Hyundai and Kia offering a range of electric and plug-in hybrid options, it would be unsurprising to see Ssangyong making progress in the UK as a result of its new EV.