Fleet's biggest brand hopes electrified powertrains will help steer it back into profit in Europe. Simon Harris finds out more. 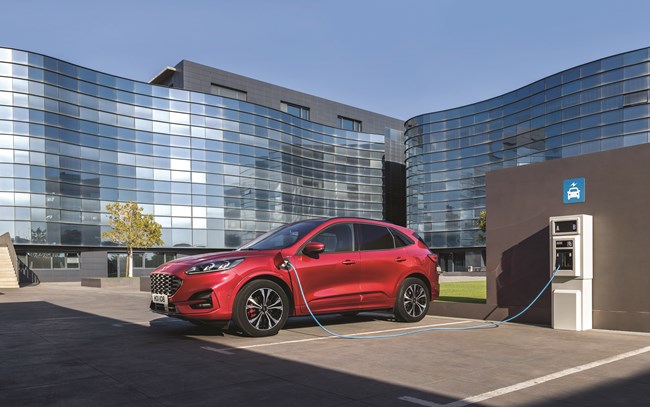 Ford is pinning its hopes on new green technology to help it stem losses in its European operation and return to profit.

The manufacturer is seeking savings of almost half a billion pounds a year, and is undergoing restructuring in Europe. It has announced plans to reduce its global workforce by 7,000, and among the casualties will be its engine plant in Bridgend, South Wales, which is expected to close next year.

It has already planned to end production of the C-Max and Grand C-Max, and recently announced it would stop producing the Edge SUV for the UK.

However, the new Kuga will come with mild hybrid and plug-in hybrid versions, and Ford has also recently revealed the new Puma, which will also offer mild hybrid technology. It has also broadened the line-up of Mondeo Hybrid models, adding an estate (p62) and new equipment grades.

Steve Derby, Ford's product manager for large cars in the UK, said: "We have noticed people are proactively asking for hybrid. There was a lot more interest in petrol recently, following the negative stories about diesel, but now it has shifted to electrification.

"We want a broad portfolio of different types of electrification, including mild hybrid, full hybrid, plug-in hybrid and electric. One of the challenges will be around making sure we qualify customers and understand what they need their vehicle for, so we ensure we sell them the correct vehicle. For some, they will benefit from fully electric, but for most, mild hybrid will be the starting point."

He said Mondeo sales have undergone changes since the car was launched in 2014, when the vast majority of sales forecast were diesel, with a tiny percentage of petrol and hybrids sold.

"We have got EU6 diesels, which are very clean and have lower CO2 than the equivalent petrol engines, so for many customers, particularly fleet customers, the diesel is still probably the most appropriate engine choice," Derby explains. "As we go into next year, there is also the EU legislation around CO2 emissions, and again that might drive different decisions. We still have customers who prefer the driving style and experience of diesel engines."

Although Ford will not comment on the future of the Mondeo beyond the current car's life cycle (it is expected to continue until 2021), Derby believes the Ford
line-up will have choices for customers who want alternatives to the D-sector stalwart.

"The D-segment has declined over the last 10 years and if you map that against SUVs it shows the opposite," he said.

"Customers have already moved to choosing SUVs. We think the new Kuga plug-in hybrid and CO2 emissions of 29g/km will become an appealing option for fleets. It stacks up well against the PHEVs in that sector, so I think we have got some product attributes that give us advantages over the competition.

"The new Focus has also been very successful for us so far. The 1.5-litre diesel has CO2 from 94g/km. The Focus has also grown in size. It is not much smaller than the Mondeo. We think the new Focus and Kuga have a great deal to offer if Mondeo customers are looking for something different."

While SUV sales have grown overall, Ford's largest SUV in the UK, the Edge, is a further casualty of the restructuring plan, and is a loss felt keenly by Derby, who was the car's product manager in the UK.

"Losing the Edge is part of our restructuring programme," he said. "As the Edge product manager, it was a bit disappointing, but I also understand the rationale behind the decision.

"Our portfolio has grown substantially over recent years, so we needed to step back and evaluate what we needed. Next year, we will have the Puma too, so we should bring new customers to the brand."