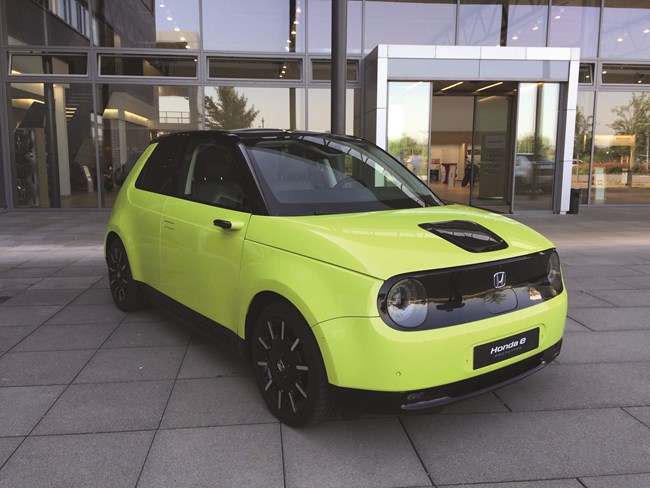 There was a moment while waiting to drive Honda's full-electric four-seater prototype at the firm's European training facility in Frankfurt when the penny dropped.

A low-loader van with a Renault Zoe and BMW i3 on its double trailer came trundling into the car park, before being ushered away to a less obvious spot. Useful for a bit of last development comparison-testing perhaps?

Even if not, it was a solid indication of the sort of EV rivals Honda has in mind for its circa £35k city car (especially the German one, given its pricing and tech).
In the flesh, the Honda E is an impressive design. The final production version unveil isn't until the autumn, with deliveries in early 2020, but this prototype looks very close to 'ready'.

Sporting acid yellow body paint contrasted against almost gloss black everything else (including roof, A-pillar, most of the wheels and a completely closed front grille), the car's exterior is undeniably cool, and cute with it - a bit like a toy for grown-ups.

Flush front-door handles are body-coloured and pop-out - like the ones found on supercars by Aston Martin - while the gloss black back-door handles elegantly hide in front of the car's body-coloured rear pillar (similar to ones Alfa Romeo used on the 156 in the mid-1990s).

Tiny camera pods replace door mirrors (like on the much more expensive VW XL1 and Audi E-Tron), and relay crisp and clear images of the rearward views to interior display screens either side of the dashboard. There is a further central rear-view mirror housing a screen that shows what is directly behind the car too, but that can be switched off if you prefer to look via a regular mirror.

And that is before mentioning the dashboard-wide infotainment screen - made up of an 8in driver's display, plus twin 12.3in touchscreens equally accessible by driver or passenger - which no car company, mainstream or luxury, can yet match. (Chinese start-up Byton's 48in version in its larger mid-size SUV will probably be the first, and that could take years to arrive in the UK, if at all). Meantime, all of the above makes the Honda E something special.

Yes, the 35.5kWh battery 'only' provides a realistic range of 124 miles (WLTP), fast re-chargeable to 80% in 30 minutes, but then Honda says that is a deliberate move.

"An over-big car and batteries are not so suitable for a city car, as they add weight," large project leader Kohei Hitomi points out, before adding, "and the Honda E is unashamedly urban in its focus".

Again, fresh new EVs from Korean and French brands have greater electric ranges for less or similar money, but none can offer the combination of genuinely high technology and design flair of the Honda E. Urban-based fleets that want to stand out, take note.

Honda E prototype drive
As the car's massive main infotainment screens weren't production-ready, we focused on how the Honda E handled in our short time with it. The 20-minute drive on a private proving ground comprised an acceleration test, a few long circular turns, shorter directional changes through closely-spaced cones, and finally a tight turning circle test. Then the process was repeated over and over until we (almost) went dizzy.

Composure regained, our report is as follows: in a straight line, the E's 150hp electric motor feels BMW i3-style rapid, linear and quiet. Honda PRs say 0-60mph in sub-eight seconds is possible and we believe them.

When it was time to slow down, the brakes felt strong and dependable (and adjustable in their re-gen, more of which later). Into the long circular left-hander and on to the slalom, the E's rear-wheel drive set-up and quick-but-firm steering made the car a doddle to drive fast and safely, and its low-slung battery pack and four-wheel independent McPherson Strut design made the car's manners calm and hard to unsettle.

A press of the 'one-pedal' driving button on the centre console allows for different levels of regenerative braking to slow the car down sufficiently whenever the driver lifts their foot off the accelerator, rendering the physical brake pedal barely necessary.

There is also Sport mode, quickening responses further, but this is a city car not a supercar, and is tuned accordingly. Overall, the E is a really fun and rewarding steer. Definitely worth a test drive.