Hydrogen bolstered as fuel of tomorrow at future fuels event

Two players in the hydrogen space have argued that the fuel may have been overlooked. Rachel Boagey reports. 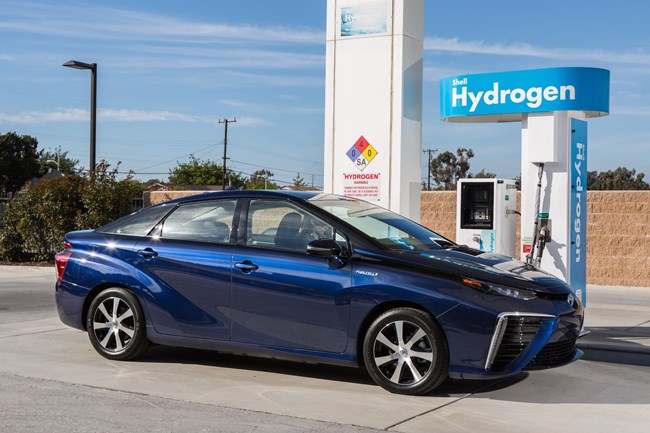 Every technology has its challenges, said Jon Hunt, alternative fuels manager at Toyota, speaking to us almost 20 years after it introduced its pioneering Prius.

Toyota has been focused on trying to improve the sustainability of its company for many years, and in 2015 unveiled plans to look at and enhance every aspect of the business, from supply chain right the way through to product and lifecycle. You could say its main focus has been on hybrid, and back in 2000 it introduced the Prius in  the UK in order to move a step towards reaching its zero emissions goals.

But while Hunt - who has worked for the company for 25 years in different roles, and is currently responsible for Toyota's hydrogen fuel cell vehicle, the Mirai - said much of the headline-grabbing attention is given to battery electric vehicles (BEVs), before buying any type of alternatively fuelled vehicle the right questions must be asked, the big picture must be considered and the correct information must be sought.

"When you have a plug-in hybrid vehicle you are increasing the size and storage of the battery and taking energy from the grid, so it is worth highlighting that BEVs are not straightforward," he explained. "Within the grid system, there is no grid that is zero emission, and there is a problem with the distribution of energy in terms of batteries themselves, which need many resources, and in fact 70% of the battery cost is the raw materials, so reducing the cost of the battery is seriously difficult.

"Then, when you look at the range problems, there are obviously rapid chargers being installed, but they require a huge amount of energy."

For these reasons, Hunt explained that it is extremely difficult to achieve scale with electric vehicles (EVs).

"It is worth noting that not everything can go that way, as if the complete transport network was electrified there would be huge issues in getting the amount of energy that is needed."

While it goes without question that there is an emerging shift towards pure EVs, Toyota is currently focusing its efforts on hybrid and hydrogen.

"On balance, it is far more effective to put lots of small hybrid batteries into hybrid systems and reduce the overall emissions," said Hunt. "The battery electric domain, I believe, is really just going to exist in smaller mobility and shorter journeys. Full electric will work in not just passenger cars but personal mobility machines as well."

Hunt explained that hydrogen can be stored year after year, distributed, and used en masse to decarbonise transport, saying: "We believe in the great potential of hydrogen as a clean, practical and plentiful source of clean energy, and we are keen to encourage and support research into how these benefits to society can be realised."

Toyota, whose Prius popularised the hybrid car, is betting heavily on hydrogen, with a £65,000 family saloon called the Mirai, fuel-cell buses and trucks in development.

"As a storage medium, it is really quite interesting," said Hunt. "You can ship it in the gas grid network, you can burn it in a domestic boiler, you can use it in processes like fuel cells."

Toyota expects 30% of vehicles to be powered by hydrogen by 2050. Hunt says it has introduced the Mirai to demonstrate the usability and durability of hydrogen.

"We have been working on it since 2002, but recently there came a point where we were happy to put it into the market," he said. "There is absolutely no compromise in the case of hydrogen technology when it comes to safety, and it is the most energy-dense thing that there is other than nuclear power."

Also speaking at the event about hydrogen was chief engineer and founder of Riversimple, Hugo Spowers. While the company doesn't have the scale of Toyota behind it, it has been working on a hydrogen vehicle and in 2015 was awarded a £2 million grant from the Welsh Government to develop the hydrogen Rasa, followed by a ?2 million grant from the EU for the beta test.

But Spowers' real criticism of BEVs is that they are too heavy.

"The top-of-the-range Tesla has a battery heavier than our car," he says.

He is not against batteries, just is critical of manufacturers trying to put hydrogen into existing cars, saying: "That is why it is so expensive, because you are trying to put it into conventional cars."

Spowers said the company is working on a business model for the 21st century.

"We have never sold a car but instead [we sell] a service with a fixed monthly fee and mileage," he explained.

It is not a lease, but the company covers all the costs such as insurance and fuel, so the car stays on the same balance sheet until its end of life.

"What we are saying is filling stations aren't going to be the issue here," Spowers says confidently. "All disruptive technologies always come in a niche where a weakness doesn't matter, so we are designing it for local use with a range of about 25 miles. If you design a car around the characteristics of hydrogen, you can essentially work around those barriers that exist until they all eventually disappear."