A state-of-the-art design studio is likely to accelerate development of Jaguar products as the company pursues its Destination Zero strategy. Simon Harris reports. 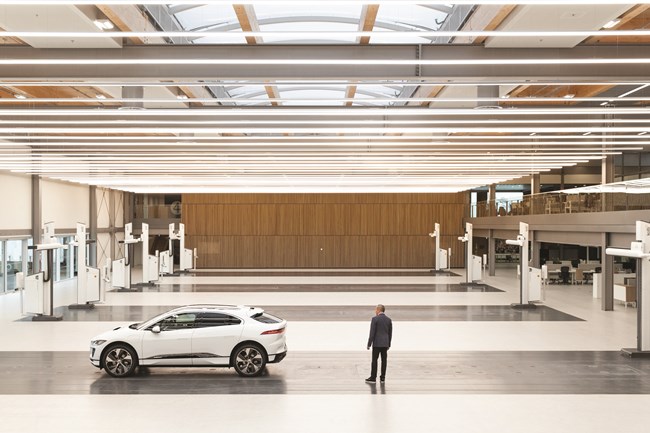 Jaguar car development could be speeded up with the opening of a new studio at the company's headquarters in Warwickshire.

The dedicated design studio in Gaydon brings the entire design team into one purpose-built creative space for the first time in the company's 84-year history, and follows the departure of former design boss Ian Callum, who left to begin his own company.

The new facility is capable of creating up to 20 clay models simultaneously, reducing the time from sketches to full-size models when developing new designs, and will play a key role in Jaguar Land Rover's (JLR) Destination Zero strategy, which targets a future of zero emissions, zero accidents and zero congestion.

Jaguar design director Julian Thomson said: "The new facility brings the entire design team together in one hugely creative space. We truly believe that inspiration comes from interaction and collaboration. Our studio is fitted with the latest technologies, but just as important is the diversity of human expertise and our passion for Jaguar, which helps us design the extraordinary."

Thomson had previously been responsible for establishing the future strategic design direction for the brand. Since joining Jaguar in 2000, he has overseen the development of the design concepts for the entire current product range.

The studio is part of an expansion to Jaguar Land Rover headquarters, known as the Gaydon Triangle, at a cost of £500 million, and builds in some of the company's sustainability ambitions.

The facility includes 2,800m2 of photovoltaic solar panels, providing on average 17% of the power used, while large glass areas reduce the dependence on artificial lighting. Around 80,000m3 of soil extracted in the excavations was reused for landscaping.

Jaguar has already launched the all-electric I-Pace, which won the 2018 Business Car Electric Car of the Year award, and has confirmed that the next-generation XJ luxury saloon will feature an all-electric version.

The Land Rover line-up already offers plug-in variants, and there has been speculation this month over an all-electric Range Rover model in future. The company also points to more sustainable materials used in vehicles, with seat fabrics in the Range Rover Evoque made from plant-based textiles using eucalyptus fibre. The plant is also fast-growing and uses less water than other plants, says JLR.

The company has also partnered with technology specialists to develop connected vehicles that will govern speed to reduce time stopped at red lights, and with Waymo to invest in autonomous capability in the future. It has also invested in research to help reduce motion sickness.

JLR chief executive Prof Sir Ralf Speth said: "Our vision is for a world in which zero-emission vehicles, public transport and self-driving pods will form one smart integrated and networked transport system.

"At Gaydon, we have invested into the future and an inspiring environment for our people. We have created the prerequisites that Gaydon can design and engineer the next generations of outstanding cars in highest quality. We have consciously invested with a 'Destination Zero' attitude.

"At Jaguar Land Rover we have the vision, the products, the people - and now I am also delighted to say we have the facilities to design and engineer the solutions which will take us to Destination Zero."