Fleets were encouraged to face the challenges of electrification head-on at a Business Car and E.ON Drive roundtable. 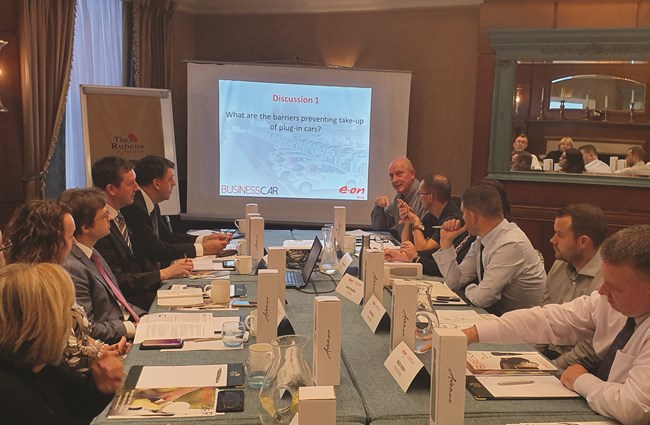 Widespread adoption of electric cars could be coming faster than people expect - but there are several challenges fleets will have to deal with along the way.

That is according to participants in a Business Car roundtable, held in association with E.ON Drive, entitled 'Now and next: fleets, company car drivers and plug-in vehicles'.

The event was organised to coincide with the publication of the E.ON and Business Car report of the same name.

Among the report's findings was that 37% of fleet managers expect to increase the number of pure electric vehicles (EVs) in the next three years, while 24% of drivers expect their next company car to be a pure EV, with a further 22% expecting a plug-in hybrid.

Speaking at the roundtable, Dr Wayne Visser, professor of integrated value and holder of the chair in sustainable transformation at Antwerp Management School, said that the issue of electric cars being prohibitively expensive was disappearing, with the price of batteries having fallen by 20% every year since 2010 and production capacity increasing, while pressure on companies to become more environmentally friendly was growing.

EVs will be mainstream soon

Darren Gardner, head of business development for E.ON Drive, said he thought the moment for EVs to go mainstream would be soon.

"Across Europe we have a network of over 5,000 charging points," he said. "In the UK we are close to 100 in 12 months. "We are pretty pleased with that, but that is a sign that [the market] is coming, but not there yet.

"We are encouraged that our customers say they are being pushed towards this for a number of reasons, not least the introduction of clean air zones, and BIK changes that really incentivise fleet managers and drivers to switch to some form of EV."

When asked about the barriers preventing take-up of plug-in cars, one concern raised was the availability of EVs to meet demand, with reports of fleets currently facing long lead times for the models with the longest ranges.

Peter Jardine, group fleet director for Countrywide, said: "The thing that worries me is availability. A lot of manufacturers are coming out with EVs but demand is going to be astronomical. 37% Quantity of fleet managers who expect to increase the number of pure EVs in the next three years.

"What are the lead times going to look like? Are we actually going to see them?"

Denise Lane, head of group fleet for Capita, said: "Five years from now it will probably be a completely different landscape. It is just this initial [period where] manufacturers aren't playing ball and need to be encouraged to start building these things.

"The demand is there - just look at Tesla. The vehicles need to be available or it just isn't going to happen."

Martin Hughes, head of remarketing for Activa Contracts, said that he thought carmakers and the government should be doing more in terms of education.

"It is the manufacturers' and government's job to sell [electrification]," he said. "They should be doing the education, and it is our job to push the technology out to the fleet to use.

"With the lack of knowledge and scare stories, it is getting to the point where everyone thinks they know everything.

"People think they are experts before they know even a tiny bit of what they should know, and it is for the government and manufacturers to [solve] that, but I just don't think they are doing enough in that arena."

Another possible barrier to adoption was identified as a lack of EVs available for rental - potentially a cheaper way for businesses to try them out.

Nigel Morris, EV integration manager for Active Building Centre, said: "One of the reasons we would go and hire a car is the cost of owning one. I have been going to hire companies saying I want to hire an EV and at the moment very few will do that."

"You might do it with a Tesla, but you won't with a Kona Electric or Corsa-E, or whatever it might be."

Panellists were also asked about their experiences with installing chargers, and Morris explained that he had found that colleagues not working in fleet needed some convincing.

He said: "I am trying to get a staff and visitor workplace charging system set up, but I am coming up against the argument that we don't have a petrol pump or diesel pump for visitors or staff, so why do we need EV charging?

"I said there are 500 gallons of fuel a day being used by your commuting staff that we could help to avoid. And when you look at that over a year the penny drops, and they start to think, actually, we can do something about it."

E.ON Drive's Gardner said that charging facilities would become something that businesses were expected to offer - and would eventually suffer from not having.

Multiple networks need to be accessible

Gardner added that when it came to public charging, the ease of using multiple networks for drivers needed to be improved.

He said: "From a pure customer perspective you have to have a [different] key fob for different chargers and it is just not easy. "I know the market is changing towards interoperability, but at the moment it is not helpful."

Visser said that companies should have policies where they would install home chargers for employees, but Lane warned there were issues with this, including turnover of staff, and also their location.

She said: "The problem you have is if they don't have a driveway. We suggest employees install [a charger] - they can get a grant - but then we have a base of staff in London or Manchester where they are living in flats, where it is impossible."

Gardner was also asked about whether the National Grid could cope with the prospect of millions of EVs being charged in years to come, and said there were potential issues, but he thought they could be solved.

"When you combine the two issues of the electrification of transport and of heating [buildings], we have got some real challenges," he said.

"I am optimistic. We will always find a way. I do think that fleets will become mini power stations and fleet managers will become energy managers.

"We are seeing across the world the energy system has traditionally been centralised and now it is being decentralised. I do believe vehicle-to-grid and optimising batteries in fleet is part of the answer."

Morris added: "Some of the misconceptions are based around, 'What if you all did this at once?'. "If we all put the kettle on at 7pm we would fry the grid. It doesn't happen.

"There is a train of thought that the adoption of electric cars, if used with smart charging and time-shifted charging, will actually help the grid."

While acknowledging the challenges, there was a view among participants that it was the fleet industry's job to roll up its sleeves and address the problems head on, rather than wait for some idealised perfect time to adopt when all the difficulties were solved.

BAM Construct fleet manager Agnes Miller said: "I think we are all expecting everything to be sorted down the line before we make that move, whereas actually, we have just got to do it, then try to sort out the ripples as we go along - and hopefully they don't all come along at once."

Visser compared the situation to how people had not waited until 5G networks were available before adopting mobile phones, and had instead started with clunky technology that gradually improved.

"You have to ask, 'could I operate a fleet today already with the existing charging network?', he said. "I think it is possible, and then you know every year it is going to get easier and more efficient."

Q&A with Dr Wayne Visser
What could fleet operators be doing now to help overcome any potential barriers to EV adoption by their business? Fleet operators need to be well-informed about the EV trend, and to communicate its inevitability and benefits to their business leaders and employees. This includes the rapid technology advances, speed of adoption, ambitious automaker commitments, strengthening government support, strategic business case, and extensive societal, health and environmental benefits.

How confident should fleet operators be that there are EVs that are suitable for roles within their business right now, or is a 'wait-and-see' approach still justified? I believe we will reach a tipping point in 2020, where there will be an extremely wide choice of EV models coming onto the market with good range and affordability, and a charging network that is rapidly expanding as important players like E.ON, Shell and BP invest in scaling. There may be a few very specific vehicle types that do not yet have an EV substitute, but for most, 'wait-and-see' is no longer justified, especially if the lease option is considered.

How realistic is the widespread adoption of EVs by fleet operators in the next year or so, or at what point beyond that does it become realistic? For businesses nearing the end of their fleet-use cycle, EV adoption is already a realistic option, especially with the UK Government's removal of BIK tax entirely for zero-emission vehicles from April 2020. For others, widespread adoption may be a few years away. This is a transition, rather than a revolution, but I expect the take-up for EV fleets will be extremely rapid within the next five years.

Dr Wayne Visser is director of the think tank Kaleidoscope Futures, a Fellow at the University of Cambridge Institute for Sustainability Leadership, and Professor at Antwerp Management School's Sustainable Transformation Lab. He is the author of 25 books on sustainable business and his work has taken him to more than 75 countries.