Mayor sets out his aims for an electric vehicle future in the nation's capital. Rachel Boagey reports. 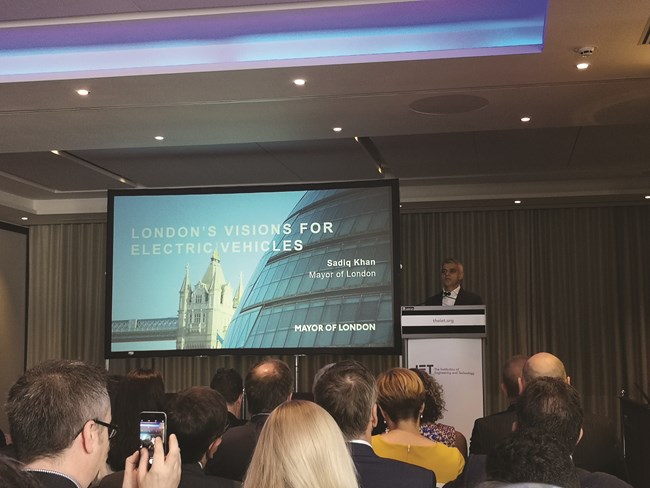 We must make sure everyone in the city has access to the essential infrastructure required to run and maintain an electric vehicle (EV), London mayor Sadiq Khan declared at the launch of his new plan to boost the rollout of electric vehicle charging points in the capital.

In a seminar at the city's Institute of Engineering and Technology, the mayor laid out his plans for an expansion of London's EV-charging network to ensure the capital continues to be one of the world's leading zero-emission cities.

To tackle the twin dangers of London's toxic air crisis and the climate change emergency, the mayor has brought together the public and private sector to deliver the EV infrastructure Londoners need. This includes commitments by businesses and retailers to transform EV charging provision in London over the coming years.

London's plan follows the mayor's establishment of the world's first Electric Vehicle Infrastructure Taskforce, bringing together representatives from business, energy, infrastructure, government and the London boroughs. The past year has seen more than 140 organisations contribute to the work of the taskforce.

London is at the forefront of the zero-emission revolution with more than 20,000 EVs, 1,700 electric taxis and Europe's largest electric bus fleet.

The plan builds on TfL's successful rollout of over 175 rapid charge points (delivering a full charge in 20-30 minutes) across the city and a growing network of over 1,100 lamp post charging points delivered by boroughs in residential areas.  This has been complemented by the rollout of the world's first ever Ultra Low Emission Zone, enforcing tough new emission standards in central London and helping drive companies to electrify their fleets.

Currently the rollout of the charging infrastructure is in the line with the demand for EVs, but London needs an electric revolution. This plan estimates the number of charge points required in the next five years based on different scenarios for the growth of EVs, and looks at how this can be delivered with less of a public subsidy and without installing points that are underused or outdated.

Speaking at the launch in London, which Business Car attended, Khan said: "London's air is so dirty and polluted that it amounts to nothing less than a serious public health crisis. It breaches legal limits and blights the lives of Londoners, resulting in thousands of premature deaths every year. We are also facing a climate emergency that threatens the long-term security and wellbeing of every Londoner.

"We need to reject the fossil fuels of the past and embrace an electric revolution in London's transport. To truly transform the quality of our air and to tackle the climate crisis, London must move away from petrol and diesel cars, with their catastrophic impact on the environment, and towards zero-emission vehicles. I want London to lead the world in this ambition, with all new cars and vans on London roads meeting these standards by 2030, not 2040 as the government is proposing."

To make this vision a reality, the mayor said he must make sure all Londoners have access to the essential infrastructure required to run and maintain an EV.

"This is a massive operation and can only be achieved if the public and private sector come together to deliver London's electric future," he said.

The plan outlines how London is on track to deliver the necessary infrastructure for a radical growth in EVs, which estimates show could increase from around 20,000 today to over 330,000 by 2025. This will be driven by a combination of new low-emission regulations, supportive policies at all levels of government and a decrease in the cost of EVs.

Also at the Institute we met with Zipcar's managing director Jonathan Hampson, who told us that the car sharing company is pleased to hear about the launch of the mayor's electric infrastructure plan.

Hampson told us: "It is clear that London needs, not only cleaner cars, but fewer cars. Electric car sharing therefore has to be part of the answer to London's future mobility needs."

Zipcar UK has outlined plans to transition to a fully electric fleet by 2025 and started that process last year with the launch of 325 fully electric e-Golfs, which, in just the first nine months, were used by over 15,000 Londoners.

"In London there is still not nearly enough infrastructure to support the ambitions of companies like ours and we want to significantly scale up our electric offering by 2025," Hampson said. "It is good to see the government supporting that and will enable our ambitions to stay on track. Our members are loving driving our electric cars, we are seeing momentum from the manufacturers bringing us the vehicles, so the one question mark for me is can the infrastructure support it, and that is why events like today are so important."

Hampson told us that London has a couple of issues, one being congestion and the other being air quality.

"There is no point in trying to solve one in isolation, as if you just have a push to cleaner vehicles you will just end up with clean congestion," he expalined. "EV car sharing ticks a lot of the boxes that London needs ticking right now."

The taskforce members are confident that the current delivery schedule in London by the private and public sector, consisting of over 300 rapid charge points and over 3,500 slow-to-fast charge points by the end of 2020, will be adequate to meet London's needs. However, more ambitious action will be required by the public and private sector to ensure London has the charging infrastructure it needs by 2025.