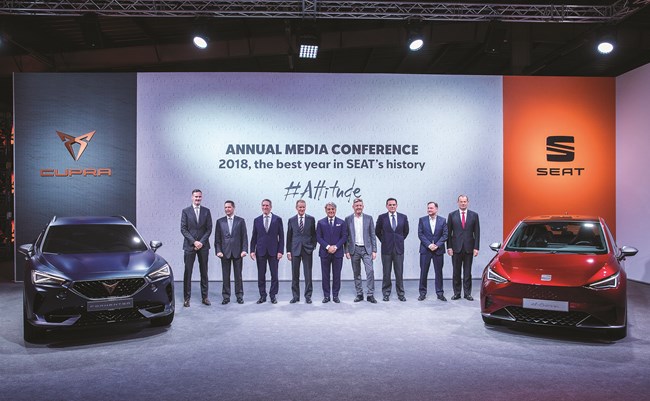 Seat will play a vital role in the future electrification strategy of Volkswagen Group as the Spanish brand launches six future electric products of its own over the next two years.

Some of the models, which will wear Seat or Cupra badges, were previewed in concept cars shown at Geneva last month.

In addition, Seat will be the lead in the development of a new electric platform for urban vehicles, in collaboration with the Volkswagen brand, which will serve as the basis for creating affordable electric cars. These will be on sale by 2023 and, according to Seat, will "help democratise mobility".

Said to be a smaller version of the modular electric drive platform (MEB - the platform on which the El-Born will be based), the new component set will underpin multiple small electric vehicles of different Volkswagen Group brands, Seat included.

The cars will be around four metres in length - around the same size as the Seat Ibiza and Volkswagen Polo.

Seat said the goal of the new platform is to develop affordable electric vehicles (EVs), with an entry-level price below £17,250 (?20,000). More than 300 highly skilled engineers will be participating in this project, based in Spain.

"Seat is a crucial building block for the future of the Volkswagen Group," he said. "It is a successful and important player, again based on close cooperation and synergies, as well as joint technology and product development within the Group.

"The small electric platform is a great illustration for this. It enables us to realise the first EV that is especially designed for urban journeys available for less than ?20,000. That is democratising sustainable mobility."

The electric offensive reaches further than new models and also encompasses a micromobility strategy that, as announced by the CEO of Seat during the Mobile World Congress, the company is going to lead for the Volkswagen Group. The recently unveiled Minimó concept car and the electric Seat eXS kickscooter are two examples of urban micromobility concepts put forward by the company as part of this strategy.

During the presentation of the results at Seat's corporate headquarters in Martorell, company CEO Luca de Meo said: "Seat now has a clearer role in the Volkswagen Group, and thanks to the results obtained, we have earned the new EV platform.

"For the first time, the Seat Technical Centre will be developing a platform that may be used by more brands around the globe."

Seat reported its highest ever profit at the presentation, with profits after tax of more than £250 million, and turnover of more than £8 billion. It also confirmed Seat's sixth consecutive year of global sales growth.

De Meo added: "One in three of our sales in 2018 was an SUV. Three years ago we had none. For the first time we have fresh products in the most relevant growth segments in Europe. When we have the right ingredients, we have shown that we can make it work.

"The UK set a new record with almost 63,000 vehicles delivered in 2018. Beyond these sheer numbers, we think the brand is gaining the necessary relevance and visibility in the eyes of consumers."

The increase in business sales represents year-on-year growth of more than a quarter (27%) compared with 2017 and means Seat has been the fastest-growing manufacturer in true fleet for two consecutive years.

Seat's most popular model in true fleet in 2018 was the Leon, with sales of 9,465. The model is about to enter its run-out period, with a new Leon expected early in 2020.

Seat believes fleet initiatives such as its four-day test drive scheme, as well as incremental sales from its new SUVs, have helped push it into the fleet top 10 in the UK.

It believes its success is all the more remarkable as fleet sales declined in 2018.

Seat achieved 6,071 registrations of the Ateca and Arona combined in true fleet, and is hoping for further increases as the Tarraco launches this spring.

The company believes the seven-seater Tarraco takes the brand into a new sector, expanding its market coverage and allowing it more opportunities to negotiate solus deals with customers.

Peter McDonald, head of fleet and business sales at Seat UK, said: "Delivering a fleet programme which meets or exceeds the expectations of customers, from SMEs to leasing companies and large corporate fleets, is a big challenge. The results speak for themselves and we welcome the fact the industry values the relationship with our brand.

"We have a genuine desire to keep innovating to improve the fleet customer experience, introducing fresh products and initiatives which resonate with drivers and decision-makers."