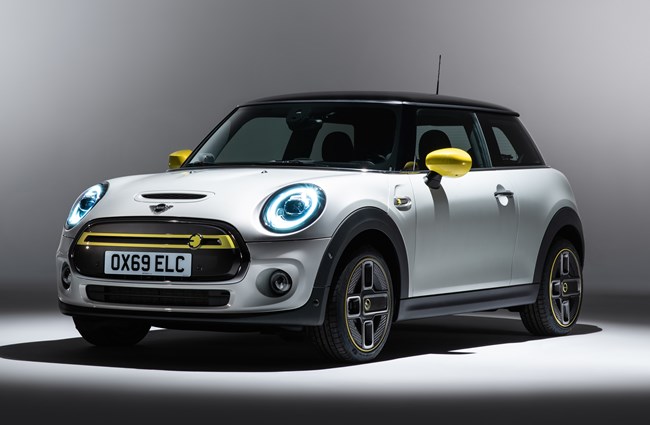 Mini's first full EV - aptly and simply called the Mini Electric - is based on a Cooper S three-door but supplants the latter's petrol engine with a 184hp electric motor powered by a 32.6kWh battery good for 124 miles. That latter range might seem low when compared to some recent Korean, Japanese and French opposition, but Mini is going down the same route as Honda's E by stressing its urban-focused credentials and suitability.

To whit, a smaller battery equals lower weight than a bigger one - at 1,365kg the Electric is only 145kg heavier than a petrol Cooper S automatic - and thus the
front-wheel drive EV will have more chance of better agility and nimbleness around town. Indeed, the brand says its EV powertrain's positioning actually helps, as Mini's PR boasts: "With a centre of gravity at least 30mm lower than in the Mini Cooper S and the reduced weight over the front wheels thanks to the electric motor, close to perfect weight distribution helps the Mini Electric achieve exceptional driving dynamics."

Either way, a smaller battery also makes the car cheaper. Prices were confirmed at Mini's Oxford plant unveil, where the car will be made, as starting from £24,400, rising to £30,400 including the government plug-in car grant.

"Removing the typical barrier of EV ownership - being more expensive than its ICE equivalent - was one of the key things we wanted to do with the Mini Electric," UK product manager Chris Himsworth told Business Car. "We think our fleet mix for this model will be about 25%, which is slightly higher than for the rest of the Mini range and we are already in discussions with major fleets about this car."

As to be expected in such an uncertain business environment, Himsworth was a little coy on predicted sales, but eventually admitted that the brand was aiming "towards the upper end" of the sweet spot between the Clubman's circa 5,000 units a year and the Convertible's roughly 2,500. That is still small beer compared to the 25,000 or so three-door hatch Mini models sold in the UK with ICE engines, but still significant - as Himsworth confirmed, "it's a sizeable launch" - and not a tokenistic move. Mini is also making the car reasonable to lease, with monthly rentals from £299, plus a £4,000 initial rental for a 48-month personal contract hire agreement with a contract mileage of 32,000 miles.

It was important to Mini that, for such a sprightly brand, the Electric's performance was also in line with regular combustion-engined versions. Accordingly, the Electric sprints to 62mph in 7.3 seconds, akin to the petrol Cooper S Mini, and on to a top speed of 93mph, "but is quicker to 30mph and handles like a Mini," added UK director David George.

Design-wise, beyond the subtle EV plug logo badging, the Electric is differentiated by a closed-off front grille, smartly bespoke and slightly more aero wheels, plus a new slim 5.5in digital driver display inside the cabin to replace the regular Mini's current, more bulky, analogue one. Despite the new powertrain, Mini says the interior packaging remains unchanged and the luggage space is identical to a regular Mini Cooper at 211 litres with the rear seats up and 731 litres maximum with seats folded down. As is becoming the norm with EVs, the Electric gets an extra Green driving mode that restricts air conditioning and other aspects to maximise range and also two levels of regenerative braking that can be activated via a toggle on the centre console (by the start/stop switch).

"We recommend every customer gets a wallbox charger and we are working on packages for business, but Mini is still including a three-pin charging option too, as we realise these can still sometimes be relevant," said Himsworth.

Sister brand BMW has a tie-in with BP Chargemaster but Himsworth said that Mini's partner had yet to be finalised.

Pre-orders for the car can be placed now with a £500 refundable deposit, and the online configurator will be ready in October before test drives next March. After which, customers can either take delivery or request their deposit back.