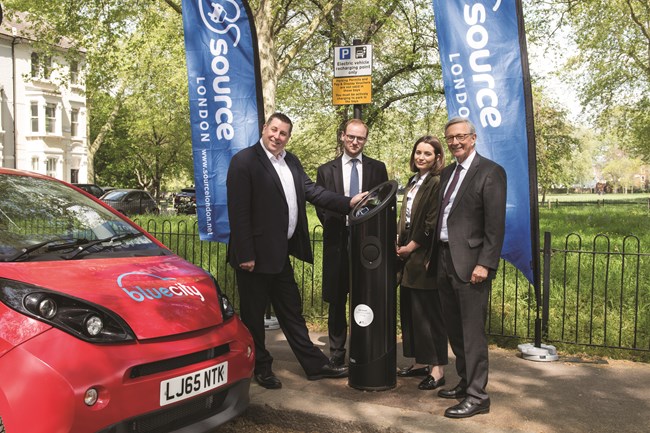 The landmark charge point is in the borough of Hammersmith and Fulham - one of 24 boroughs in the capital in which Source London operates.

It expects to add two or three more boroughs to its network by the end of this year, while at the same time increasing the number of charge points in boroughs where it already has a presence.

According to managing director Christophe Arnaud, the network - which says its charge points are powered by 100% green energy - aims to have 200 in each borough; currently, two have passed the 100 mark.

The network has different sorts of charge points running at 7kW, 22kW and 50kW, and according to Arnaud they are targeting different sorts of users, with the 7kW units - which make up the majority of the network - intended for residents charging overnight, and the quicker ones for business drivers topping up during the day.

He said: "A good number of taxi drivers recently switched to EVs, and they need to charge twice a day, so we located 22kW and 50kW chargers in very specific areas where taxi drivers break.

"We also have quite a lot of small businesses that have decided to switch to EVs, and quite a few are cleaning companies that need to stop by different buildings using our charge points on a regular basis, because it is convenient on the street and close by the building."

Source London now has potential for a large increase in the number of fleet drivers using its network, thanks to a recently agreed deal with leading fuel card provider Allstar.

Arnaud said: "We have finalised the agreement so now the card they provide to business fleets is compatible with Source London. Businesses are taking a bigger piece of the network. It is still a bit small, but a year ago it was nothing. We have taxi drivers charging two times a day, car rental, car sharing, small businesses and now a big player like Allstar."

Another potential area of expansion is in direct dealing with car manufacturers, with Arnaud revealing a number are looking at embedding Source London compatibility in their new EVs - the increasing number of which he says is also set to drive demand.

However, one expansion not yet on the agenda is a move outside the capital, with Source London's charge points all inside the M25 except for an outpost at Crawley and Gatwick Airport.

"In London we can see the growth is there," said Arnaud. "I look at it and the political spirit is here, there is a real interest for any people doing business in London to switch to EVs.

"We have no plans to create a similar network in other cities, but it doesn't mean we could not. Right now there is not the opportunity to do it. We are keeping our investment in London."

Arnaud is also expecting an uptick in demand from the new London Ultra Low Emission Zone (ULEZ), although this will not be immediate.

He said: "The more ULEZs the better, but people living or with businesses in these areas will have to start a process to buy an EV.

"Usually when someone is creating that zone it is taking six to eight months to see the impact of new EVs."