Jack Carfrae asks if fleets should consider all-weather tyres and whether or not they are worth the investment. 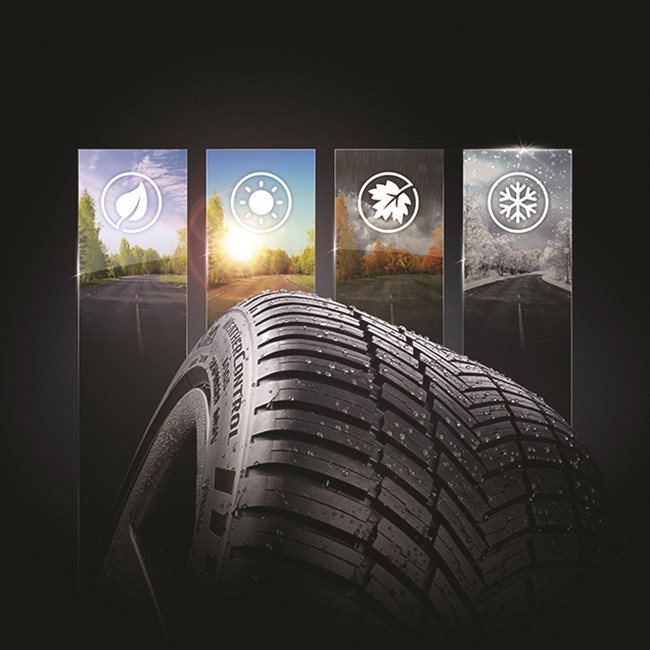 British weather isn't exactly renowned for its predictability. Barring extremities such as the Highlands, the country's variable conditions are usually anyone's guess, which makes the whole summer/winter tyre move a tricky call. The 'Beast from the East' was probably enough to get folk thinking about their choice of rubber, but there is no guarantee of a repeat performance next winter, nor can we bank on a reprise of 2018's long, hot summer.

Even the most diligent of fleets, with regular, depot-style access to vehicles, would have to be Michael Fish to time their change right (and even then, what happens if theres a hurricane?), which is where all-weather tyres come in.

They blend the properties of both winter and summer tyres, generating good grip in warm, dry conditions, but then not hardening as much as summers in the cold, making them much better when things take a turn for the worse. They will never perform as well as either in the extremes of their respective specialist environments, but they are a good all-round intermediate - ideal for the likes of Britain.

These tyres have been around for at least a couple of decades in various guises but never really got serious attention until Michelin launched the CrossClimate tyre in 2015 and really went for it with the publicity. The company dubs it a summer product with winter capabilities - it was the first summer tyre with 3 Peak Mountain Snowflake accreditation, which meant it could be used in the winter in alpine areas where winter tyre usage is mandatory - with former products historically leaning more towards the winter end of the spectrum.

Attention and development subsequently turned on all weathers, and their popularity has shot up, although they continue to represent a small portion of the market; much like electric cars, they experienced a 35.5% year-on-year uplift in the 2018 passenger vehicle tyre sales market but represented a mere 5% overall. By contrast, summers were down 5.2% but accounted for 85% of the market, while winters were up by 2.3% but made up the lowest portion of the total passenger vehicle market at 2.2%.

All-weather tyres are said to be, at most, 10% more expensive than an equivalent standard tyre, although premiums are more likely to be in the region of 5%, and they are now available in most wheel sizes, whereas in the past they were generally limited to the more popular 15 to 17in range. Factor in the lack of downtime involved in switching between summers and winters, and they make a compelling case - but despite the benefits, most car fleets have yet to really wake up to the prospect of anything other than summers, as Brian Porteous, technical manager at Michelin, explains.

"In terms of car fleets, they often stick with a summer tyre all-year round," he says. "Where we do see fleets having a winter/summer or an all-season policy are ambulances, for example, or perhaps delivery fleets, where there might be penalties for not delivering or not being there at the appropriate time."

That is borne out by the figures, as the van tyre market saw a 212.3% spike in all-weather tyres last year; again, that is only 6.6% of overall sales, but summers and winters in the van market declined by 8.7% and 20.1% respectively.

Some fleets actually stick with winter tyres  all year round, and shoulder the poorer performance and increased wear in drier months, simply because they don't want to get caught out in the worst of the weather.

"Because of inertia or organisation or a deliberate policy, they take the compromise in summer because they need that performance in winter, and they don't want to have all the downtime associated with changing a set," adds Porteous. "What they are saying is, they will forgo the benefits of a summer tyre in summer so that they can have that capability all year round, because the most important thing for them is they actually get to where they want to go."

That is unlikely to be the best way to do it, though, as Karl Naylor, UK country manager for Apollo Vredestein explains.

"A lot of people do that, but if you are choosing that as a policy, or even as a consumer, I think there may be doubts in your mind as to whether you are doing the right thing. Is it safe to leave them on during the summer? Are they going to wear out more quickly and, therefore, are you wasting money?

"All-weather tyres sort of answer that, and your fleet manager can say 'I am doing the right thing now; I can leave this on all year and it is not going to wear out quicker than it is designed to in summer,' which is why we are now starting to see a shift, in vans, from summer to all-season instead of summer to winter." 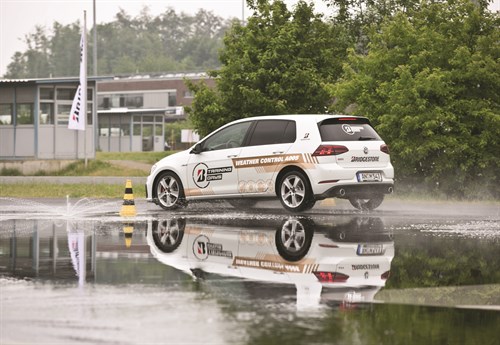 As kill-all a solution as all-weathers seem, it is important to remember that they are a compromise, and less effective than summer and winter tyres when either climate bites hard. As with any commitment, where and how the fleet operates should ultimately dictate the set-up.

"It is a preference based on the conditions that you are faced with, because you also have to offset wear," says Gary Powell, technical manager, north region, at Bridgestone, "I have to generalise here, but all-weather tyres have a deeper original tread depth and a softer compound because they are going to run in winter conditions. It could get down to something like -15°C, even in this country, and you have then got to be careful of the glass transition temperature of the compound, which is where the compound starts to go from rubber to plastic, so the tread stiffens, which is the wrong direction for grip.

"Because all-weather tyres have this softer tread compound, in summer their wear out rates are generally higher - heat is a killer for wear. You look at an all-weather tyre and you think 'it is a couple of millimetres deeper so it is going to last me longer,' well, don't be fooled; you are going to have more block shuffle [movement of the tread] and you have a softer compound, so generally, the wear is going to be worse."

Finding the precise set-up that best suits a fleet is neither quick nor easy; it requires proper analysis and a good look at any historical issues that the vehicles have come up against.

"You need to look at the exact type of operation, their experiences and what issues they have had," says Powell. "You need to look at tyres that have completed a life, take their mileage data so that you can understand it and maybe do a small trial to see whether or not there are benefits to be had. This is not a simple switch; it needs some study and investigation to do the job properly."

One fleet that has gone the all-weather route is Croft Travel. The company is based in County Durham, operates a taxi-style service within the North East and, including subcontractors, has in the region of 30 vehicles on its fleet, comprising small cars, large 4x4s and vans, and more or less everything in between.

Managing director Laurence Beck tells Business Car the firm was simply buying the same again when it came to rubber - i.e. whatever the vehicles came with in the first place - until a local fitter suggested swapping to Apollo Vredestein Quatracs.

"Tyres aren't something that greatly interests us unless they are going to save us money, and we are finding that these do; they're probably saving us about 20%," says Beck.

Beck says that previously the company has faced the issue of stranded drivers on summer tyres, but its location means the weather could go either way between October and April, so vehicles would be swapping from summers to winters with abject frequency if there were a policy of both.

"Obviously, the less tyres I can use in a year, the better it is for us, and fewer changes means less vehicle downtime," says Beck. "If I send a driver to get a tyre changed, if it is an hour, I have an on-cost of around £30 - plus the cost of a tyre - so if I don't need to do that twice a year, then we are saving that cost across the whole fleet.

"I can't think of any one case where we have changed them [to all-seasons] and they have not lasted longer than what was on previously, and I look at savings in terms of cost and use. If somebody says 'I can get you a tyre and it is £25 and you are paying £64,' that is great, but if that £25 means I am changing it every two months, it has cost me a lot more than that difference."