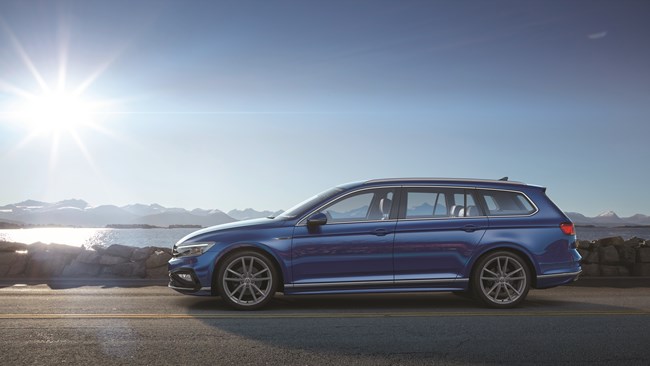 Volkswagen could be poised to become the bestselling brand in the mainstream upper-medium sector with changes to the latest version of the Passat.

The updated model, which will make its public debut at the Geneva Motor Show in March and arrives in the UK in August, promises greater appeal, with significant improvements to plug-in hybrid and diesel variants.

The estate version of the Passat was already the bestselling car in its sector, even outselling wagon variants of the Mercedes-Benz C-Class, BMW 3 Series and Audi A4.

The Passat estate has outsold the saloon by around two-to-one, and the entire range, including saloon, estate and Alltrack, reached 12,450 units in 2018.

Among its mainstream rivals, only the Vauxhall Insignia (13,561) outsold the Passat, while the Ford Mondeo was more than 4,000 units behind the Volkswagen on 7,879.

By comparison, Peugeot expects to sell a total of 5,000 units of the impressive new 508 in 2019, beginning from a much lower base than its predecessor, and like the Volkswagen will soon offer plug-in hybrid options.

The sector has been declining for many years as many drivers have decided to move to a premium-badge car or an SUV.

But Volkswagen bosses believe the revised Passat will have renewed appeal.

Passat product manager Joe Laurence said: "With a significant price realignment versus the outgoing model and increased electric range to 43 miles (around 35 real-world range) and a highly comprehensive specification, we believe the new GTE will be a particularly desirable fleet car."

Volkswagen has reduced the price of the GTE by £2,500, effectively absorbing the loss of the plug-in car grant for hybrids, and while this will make little difference to transaction prices, it will help reduce BIK tax bills, and make the car even more appealing when the levy on plug-in cars is reduced even further from 2020.

Laurence said there had only been a modest decline in diesel sales for the Passat, which had suffered less than the car market in general.

"There has been a slight decline from 80% to 70% diesel, with half of those moving to petrol and half to the GTE," he said. "The GTE mix was around 15%, but with the increased range we expect this to increase to around 25%.

"We believe this will strengthen the image of both the brand and the Passat in terms of EV credentials."

But there is an important development with diesel, too, and the launch of a new engine. All engines will be
RDE2-compliant (mandatory from 2021), which will eliminate the 4% diesel supplement on company car tax, and Volkswagen also promises reduced CO2 emissions and improved real-world fuel economy.

Laurence says it hasn't been a major problem for Volkswagen to explain the virtues of the latest clean diesels to customers.

"The only challenge has been managing availability of the Passat during the WLTP transition," he said.

"We have seen more interest in DSG diesel in particular because of its lower CO2 rating for certain derivatives."

Laurence was bullish about the Passat's position in the car market, pointing out that it has been on sale for 46 years - longer than the Volkswagen Golf - and believes it has a secure future.

He added: "It has been one of our top five-selling models for many decades and enjoys great customer loyalty.

"In the UK, the estate version is the bestselling model in the segment, and although the upper-medium sector has been in decline, we believe the Passat still holds a key place in the market for premium and practical cars."