Connected and quiet - innovations from CES 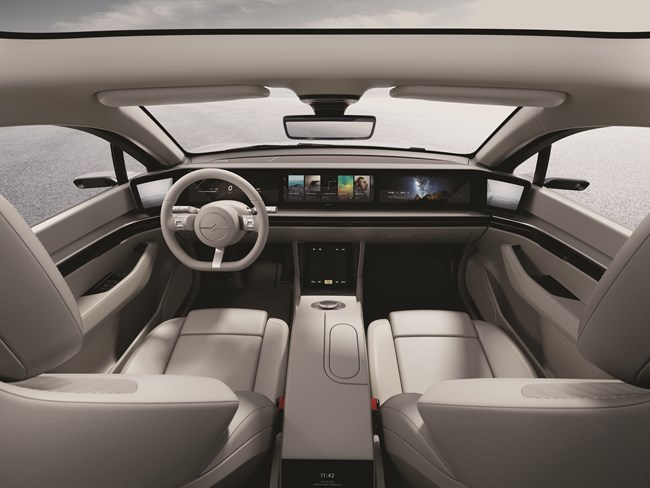 Broadly speaking, the automotive technology at the Consumer Electronics Show (CES) in Las Vegas follows two main trends: the next step in infotainment, and making the car into an extension of the living room in preparation for when - or if - self-driving cars arrive.

Land Rover had the new Defender on its stand at the annual event this month to showcase the new 'Pivi Pro' infotainment system. It comes with a 10in touchscreen and two SIM cards, the latter allowing it to use two networks for increased coverage and multiple users to connect via Bluetooth at the same time.

Thanks to the increased connectivity, and because the system is also connected to the various control modules in the car, it makes over-the-air updates possible. When implemented correctly, it might just save a trip to the dealer for maintenance and reduce downtime of the vehicle. Expect this system to roll out to other Jaguar and Land Rover cars over the coming years.

A 10in infotainment system might be quite sizeable today, but may seem positively puny in a couple of years. Sony caught all observers by surprise by presenting the Vision-S, an electric concept car.

With Sony being an electronics company, the car was mainly a showcase for what it can do with the tech inside, rather than a preview of a production car. The main attraction was a panoramic array of screens that incorporate gauges, entertainment and displays either side to replace the door mirrors. If this seems rather pie-in-the-sky, consider that Honda, that most sensible of manufacturers, will have a similar set-up in the electric Honda E, which we will test in production form in the February issue of Business Car.

Going beyond screens, both Audi and BMW presented concepts that feature an advanced head-up display capable of mixed reality. These systems are able to project images onto the windscreen that adapt to the environment in real time. For example, the navigation would allow arrows to be shown directly on the street the driver needs to turn into.

Mercedes' MBUX system fitted to many of its current models shows arrows on a video recording of the road ahead, so showing this information on the windscreen would be a logical evolution.

The next step in connectivity for infotainment as well as a vehicle's central system will be enabled by 5G. BMW will integrate a 5G telematics system developed with Samsung in the iNext, which is due to launch in 2021. More down to earth, BMW showed how its cars will feature wireless Android Auto from July 2020.

Some of the presentations at CES were about simply making car cabins a nicer place to spend time. As cars increasingly feature electric propulsion, and therefore become quieter, the sound system is drawn into focus, so there were plenty of companies presenting ways to boost the in-car audio.

Harman, known for its premium sound systems, showed how noise cancelling can make car travel more serene. It does this partly by cancelling out road and wind noise, and partly by recognising the conversations from occupants and adjusting the music volume to make speech clearer.

Another, more traditional way of making cabins quieter is by improving sound insulation. Nissan brought a new material made from a lattice structure and plastic film to limit the transmission of a wide frequency band that includes most road and engine noise. The manufacturer says that the new material weighs only a quarter as much as the traditional material.

The upshot is that cars can become lighter and therefore more fuel-efficient, and that smaller cars that would normally be fitted with less insulation because of weight could become more refined.