The identity of the UK's most electrified police fleet might come as a surprise. 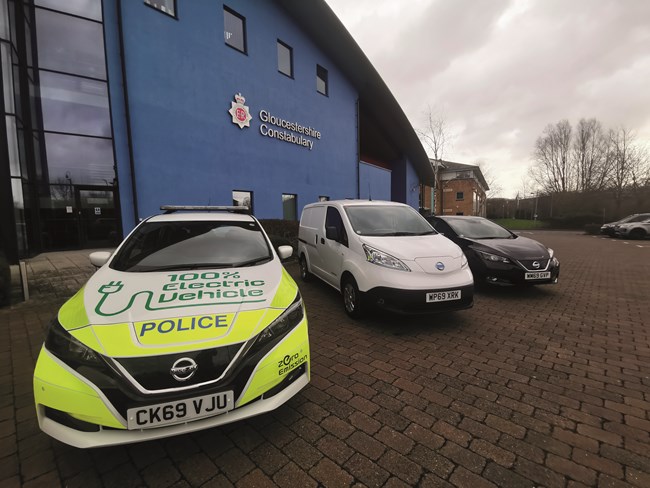 If it's true that electric vehicles (EVs), at this stage in their development, are best suited to city fleets, then clearly nobody told Gloucestershire Constabulary.

It may be patrolling one of the more rural counties in the country, but thanks to a major recent order with Nissan it is now second only to the Metropolitan Police in London in terms of the total number of EVs on fleet - and takes the number one spot when it comes to overall fleet percentage, with 21% of its vehicles now electric.

It is reckoned this will save nearly 190 tonnes a year of CO2, and also mean a saving of more than £138,000 a year on fuel and maintenance costs.

In order to get the lowdown on how such a major chunk of a key operational fleet can be switched to electric, we spoke to Steve Imm, the force's head of transport services.

Having only been in the post for 16 months, he explains that the force got going with electrification before his arrival, when it added five first-generation Nissan Leafs to its fleet in 2016.

Seven second-generation Leafs followed in 2018, before the major new purchase that has taken the total to 65 Leafs, and also 10 electric Nissan e-NV200 vans.

The Leafs aren't being used as rapid response vehicles, but 11 have still been deployed as marked cars, with sirens and blue lights, as Imm explains. "They are going to be servicing our neighbourhood policing teams and local investigation teams, used for general crime enquiries," he says.

"Those teams deal with ongoing offences and crimes, so they might need to go out
and get some CCTV evidence or take a statement from somebody, so they will be used through the course of the day for general non-response work."

The rest of the Leafs are unmarked, but Imm explains that their duties are similar, working for departments including major crime teams - formerly known as CID.

"They work seven days a week, but they don't work 24 hours," he says. "Sometimes these departments only do 10 miles a day, but they still need a vehicle because they need to be able to get out and about.

"Really, the maximum daily mileage on those sorts of departments is around 60 or 70 miles. When we assessed the fleet we looked at the average mileage of vehicles within departments, and found that the vast majority of the use fell well within the range of the vehicles that we could put on."

Imm explains that deploying the Leafs required a reorganisation of the way vehicles were allocated to different departments within the force.

Previously, each individual department would have a handful of its own vehicles, whereas now they have access to a pooled group of Leafs, shared with departments based in the same building.

"Where our major crime teams are, we have got a building that could take quite a lot of capacity for charging points," Imm says. "We have installed 16 charging points at that location, and as a result I have pooled 16 electric cars to service all of the departments in that building.

"What I have then done is removed petrol and diesel cars from those individual departments.

"In actual fact, pooling these vehicles makes it more efficient, because if they had three officers deployed in their normal petrol or diesel cars, they didn't have another car, but in this instance they have got access to a higher number, and in theory can deploy if the [pool] vehicles are available. So you could put a fourth out if you needed to."

When electrifying fleets, managers might worry about the response from drivers, but Imm says the reaction from Gloucestershire Constabulary staff to the latest generation of Leafs has been wholly positive.

"The first-generation Leafs only had a range of 60-70 miles, so they were received quite negatively," he recalls. "But when we brought the next generation in, when you are talking 140-160 miles, opinion started to change and they soon realised actually they were viable, they could be used.

"People hate change, and with the electric car market, although it is growing, generally the general population don't see the value in electric cars.

"Buying a car is fairly simple. Putting in the charging infrastructure, as long as you do the background work, it is fairly simple to get that done. But winning over the hearts and minds of the staff and the teams and the officers is more difficult.

"But essentially all I did was I gave them the vehicles and said 'get on with it'. I took [petrol or diesel] cars away and I gave them the Leafs - and all that negativity washed away.

"Since they have been in, I haven't had one complaint from anyone." Driver acceptance of the Leafs has likely been helped by training measures implemented by Imm when they were introduced - which included videos as well as in-person training.

"Myself and chief inspector Carl Bourne produced some in-house short videos. One on charging, and one on the basic functions of the car - how it works, how to turn it on, how to use the E-pedal, the eco modes, and the general functions.

"Then very early on, when I first put them into larger teams, I went with a car and gathered an audience to go through the functions so that people felt at ease with driving them."

Imm says this approach has paid dividends when it comes to getting staff to utilise the new EVs. We have done a lot of engagement with the teams to make sure that they are not just going to ignore these cars and carry on using their others.

"We have recently installed telematics within our fleet, and the utilisation of the Leafs is over and above the combustion engines within departments, so I can see that they are being used, and we have actually seen a decline in the use of petrol and diesel vehicles."

Away from the EVs, Imm tells us that the majority of the rest of his fleet is diesel-powered. He says this is due to the vehicles being used for longer journeys than those run by some other forces, due to the rural nature of Gloucestershire.

"We find the use of the vehicles generally is for long distances," he explains. "If you compare it with the likes of Avon and Somerset, they have got quite a metropolitan-style force in that they have got inner city Bristol, where you benefit from petrols because of emissions and because they are doing a lot more shorter journeys.

"Our force being very rural - obviously we do have some urban settings, but the toss-up is around your economy on fuel. Diesel was preferred based on that, and because of the types of journeys we make."

As already touched on, the installation of telematics within the fleet has been another recent development for Gloucestershire Constabulary.

Imm says this was done after a fleet review highlighted that the force's level of data-gathering from vehicles could be improved.

"Mileage data, for example, historically was based on officers refuelling and keying in the right mileage for the vehicle, inputting that data every month," he says. "So by the middle of the month your mileage was out of date anyway.

"Telematics obviously allows us to have that data to hand. We went into a business case to procure telematics, and we were quite behind the times on that, because a lot of other police fleets in the UK already have telematics.

"If you want to understand vehicle utilisation, your fuel, your economy, then telematics really is the best way to do that."

Looking to the future, the new Nissans are far from the end of Gloucestershire Constabulary's electrification story.

nder the terms of a five-year plan put forward by police and crime commissioner Martin Surl, the plan is to take the electric fleet share to 40% in the next four years.

However, this may take some infrastructure upgrades, with the 87 charge points currently installed at force locations running at capacity when accounting for staff charging personal EVs.

Imm says: "For us to go further, we are obviously going to have to put more charging points in, which means we are going to have to reassess, and [look at] changing technology, and how the electrical load is controlled and delivered. 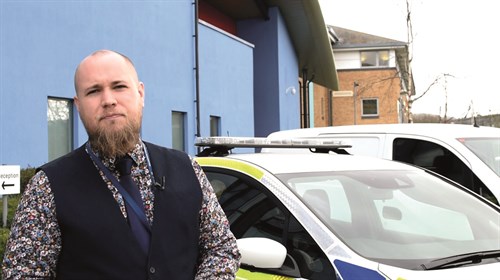 Steve Imm is the head of transport services at Gloucestershire Constabulary. He started his career in the public sector in 2010, joining as a custody detention officer and climbed the ranks, becoming the contract manager in 2015. In 2018, his career took a turn to a different road when he was recruited into his current role.