Ford on its electrification strategy

Ford is hoping to make a big initial statement on electrification, which will pave the way for its future models. Sean Keywood reports. 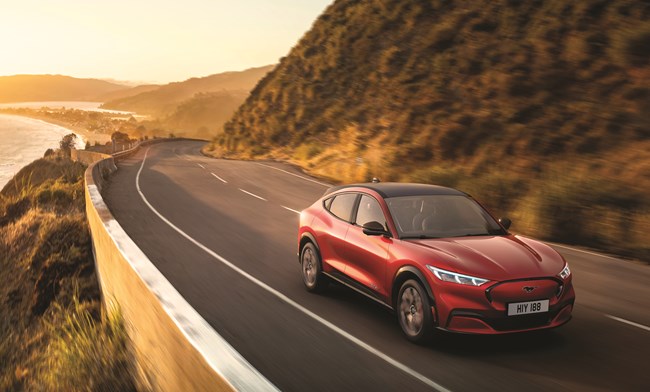 Ford is aiming to make a high-quality entry into the electric vehicle (EV) market that will set the template for cheaper models further down the road, company bosses have said.

The Mach-E, Ford's first modern mainstream pure EV, is a large, high-performance SUV for which prices will start at around £42,000, in contrast to the new electric entry points from rivals such as Vauxhall, Peugeot and Honda, which are launching far more modest, and therefore cheaper, superminis.

While saying that the Mach-E's size, performance and range capability mean its price still represents good value for money when compared with rivals, Hoare also insisted that this ambitious entry into the EV market is the right way for Ford to go.

He said: "We want to put the best foot forward for electrification, we want to demonstrate the great strengths of electrification, and make it aspirational, so the products that will come beneath it will start with credibility, and our customers will understand what is coming from Ford.

"This product really is there to demonstrate how to do electric properly, with a product that is very aspirational as well, with great driving dynamics - it doesn't compromise and trade off all the things we love about a vehicle in order for it to be electric."

Regarding plans for smaller EVs in the future, Hoare pointed to a partnership announced last year with Volkswagen, involving the German firm's MEB EV platform.

He explained: "We can jointly share the scale effect on that MEB platform, and that is really important because the market is very small at the moment, and so we really need to amplify that volume and get the scale benefits.

"Working with Volkswagen is really going to allow us to do that and get those products to market at an affordable level, but still with all the functionality and features you would expect."

Away from pure EVs, Ford's electrification approach is divided between mild hybrids with its smaller cars the Fiesta, Focus and Puma, conventional hybrids with the Mondeo large family car and Galaxy and S-Max MPVs, and plug-in hybrid with the new Kuga, which will also be available with the other two hybrid powertrains.

This means that Ford's bestselling models in the UK, the Fiesta and Focus, will be the ones adopting the least drastic initial approach to electrification. However, when asked if this might represent an undercooked approach from the company, Barratt said: "Not today. That doesn't suggest we are not working on [EV or PHEV Fiesta and Focus] and it doesn't suggest that we have disregarded them.

"But the prioritisation for us is to democratise electrification, and that is go where the volume is." Barratt also predicted the coming addition of conventional hybrid power would be a big boost for the Galaxy and S-Max - vehicles in an under-pressure segment that many manufacturers are leaving altogether.

He said: "We still see good demand for those vehicles. The markets have changed and the predominant customer demand is in the SUV space, but we still have good solid demand across a European and export market basis, and that is why we have chosen to invest further in those products with the cascade of the hybrid powertrains.

"I think the hybrid powertrains will absolutely transform the S-Max and Galaxy, and put them back on many people's shopping lists. "I still think they are some of the best cars we make, personally."