High volumes of outsourced components for UK-produced electric vehicles could class them as 'imports' in future and attract tariffs. Simon Harris reports. 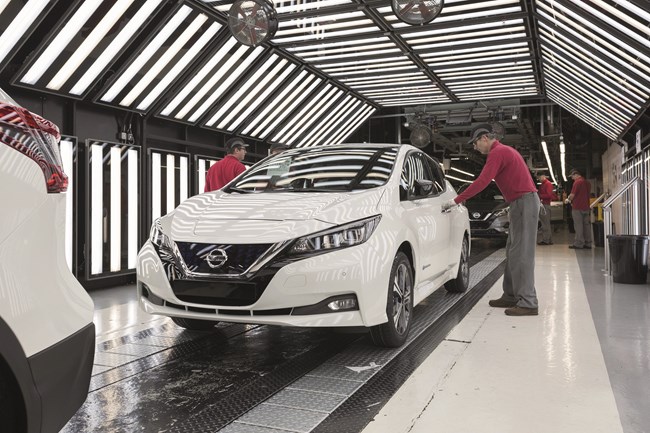 An automotive industry expert is warning that the UK could become a less attractive place to build EVs in future as other European countries invest more heavily to support battery production.

The EU is committed to reducing dependence on EV batteries produced elsewhere in the world, aiming to eliminate them completely by 2027.

Unless the UK does the same, it is likely to fall foul of 'rules of origin' legislation and see tariffs applied to battery electric vehicles (BEVs) built in the UK.

The organisation representing European car manufacturers is lobbying the EU to relax the rules on the component content of vehicles built in the UK to help reduce post-Brexit red tape.

Under current rules, even if the UK and EU agree a tariff-free trade deal on import and export of 'local' goods, the likelihood of a higher level of components from outside the trading area could result in vehicles becoming more expensive in future.

According to the Financial Times, the European Automobile Manufacturers' Association (ACEA) is lobbying the EU on behalf of manufacturers producing cars in the UK and would like to see the threshold for the level of components for qualification as domestic be reduced.

Should there be a free trade deal with the EU, 'domestic' products would include UK and EU content, as well as components from countries both have free trade agreements with.

The European Union currently states that 55% of components should be local, allowing 45% of content from elsewhere in the world.

David Bailey, professor of business economics at Birmingham Business School writing in a blog for the UK in a Changing Europe website, said: "A Toyota Corolla assembled at Burnaston may have a Union flag sticker in the window, but given that parts are imported from Germany, France, Italy and Japan (among others), what 'nationality' is the car?

"That's where rules of origin come in - they're used to decide whether a product assembled in a country should be counted as a product from that country or as an imported product.

"The UK asked for a 'cumulation' agreement that would allow auto firms to count all EU and UK content as local, as well as lots of content from other countries with which Britain and Brussels both had trade deals - like Japan.

"The EU is open to the former but is taking a more narrow approach on how much non-UK/EU content can be allowed in cars. Behind this is a long-running concern in some European countries over the UK being a centre for assembling cars using components coming from the Far East."

He added that an area of growing concern in future would be the production of battery electric vehicles, which are likely to have an even higher proportion of components from outside the UK or EU.

Although there has been significant investment by some countries in Europe to support increased EV battery production during the next decade, all within EU state aid rules, the UK is in danger of losing out.

"In addition, the actual cost of batteries is falling dramatically as the industry scales up and learns-by-doing, so this becomes less of a critical issue in terms of meeting rules of origin," he said.

"While there is a tentative proposal from [EV battery firm] BritishVolt to build a battery 'gigafactory' in the UK, the UK is lagging badly behind the EU in this area.

"Without a major effort to reorientate the auto supply change, UK car assembly will be increasingly dependent on imported components from the EU to meet rules of origin rules going forward."