Renault was one of the first to offer a mainstream full-electric vehicle, but arguably since then its EV expansion slowed. The Mégane eVision looks set to change all that. 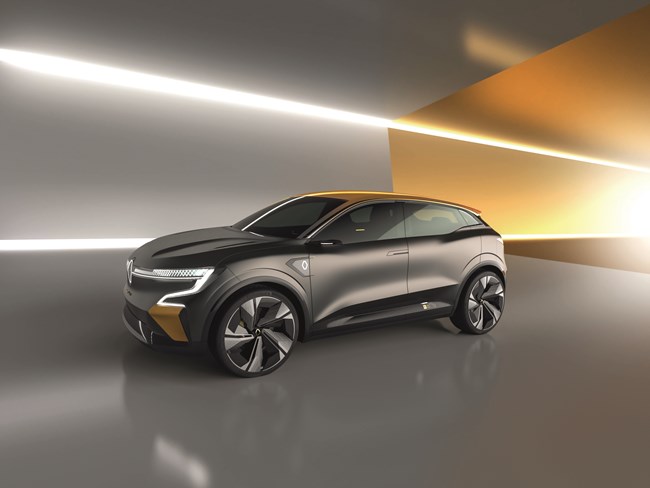 Yes, Renault has had a well-regarded Zoe full-electric city car since 2013 in the UK and, yes, now offers an expanding range of mild, plug-in and full-hybrid versions dubbed E-Tech on most of its existing nameplates (and new ones like the Arkana SUV Coupe). But the more dramatic, if slightly longer-range, news for the French marque is that it is soon to launch a bespoke new modular electric car platform that will spawn many new full EVs.

The Mégane eVision's dimensions - at 4,210mm long, 1,800mm wide, 1,505mm high and with a 2,700mm wheelbase - offer a very similar footprint to a Captur supermini-sized crossover but with the interior space of an existing C-segment vehicle (i.e. a Mégane-sized car, currently quite a bit longer at 4,359mm). De Meo also said that the production electric vehicle due in the UK by 2022 would look 95% like the concept's exterior - the interior was not ready to show - and promises a range of 280 miles (WLTP) with potential to go higher. The car will also have the ability to accept up to 130kW-level charging to enable 125 miles of range to be gained in 30 minutes from a fast DC charger. Just like the original Mégane, a family of EVs from the same underpinnings is due, so we could expect a full-electric mini-MPV-style Scenic, estate, cabriolet and coupe. Indeed, it is on record that the CMF-EV platform can accommodate a variety of vehicle body types by fitting different modular batteries either vertically or horizontally, a wheelbase that can extend to 2.77m, and a second motor at the rear for four-wheel drive options. As a clearly stated Alliance platform, expect Nissan and Mitsubishi vehicles to use this CMF-EV architecture too.

Despite this all-electric move, Renault did concede that its existing Mégane model would remain on sale for a while alongside the new EV design to offer conventional engines and various hybrids. However, by 2022 de Meo said that all all-new models from Renault would be electric or electrified as part of its mid-term goal of a 50% reduction in CO2 in use by 2030 compared to 2010 and the longer-term goal of zero CO2 status for the company within Europe by 2050. As Renault's third best-selling nameplate ever, there was apparently little debate about keeping the Mégane name for the new family of vehicles. And with the innovative new EV platform underpinning the new model - which will effectively be its fifth generation - de Meo is confident the Mégane has a bright future ahead, as he concluded: "The Mégane eVision is a masterpiece of packaging. We took our 25-year bestseller and took it to the future. This is just the beginning; a whole new generation of innovation-packed electric vehicles is to come."

Group Renault design VP, Laurens van den Acker, described the new Mégane eVision as having "the strength of an SUV and the elegance of a coupe," and, in the sense of its higher ride height and 20in wheels teamed up with a sloping roofline and smooth body surfacing, that's apparent. But beyond those broad and evident elements, there are a lot of neat details on the Mégane eVision too - from the slim front and rear lights to the striking gold roof, rear-view exterior cameras and flush door handles. Indeed, everything is as flush as possible to aid aerodynamics and EV range, from the alloy wheel design to the windscreen and side windows.

The Dacia Spring EV was also launched at Renault's virtual eWays event in October and is very unlikely to come to the UK in right-hand drive soon. Officially, Renault says it is "still studying the possibilities", but the first full EV from the cost-conscious brand will begin as a car-sharing scheme product in continental European markets and be available for direct sale to private buyers.