Number plates to be green badge of honour

From autumn 2020, zero-emission vehicles will get number plates identifying them as such, but is it more than just a token gesture? Illya Verpraet reports. 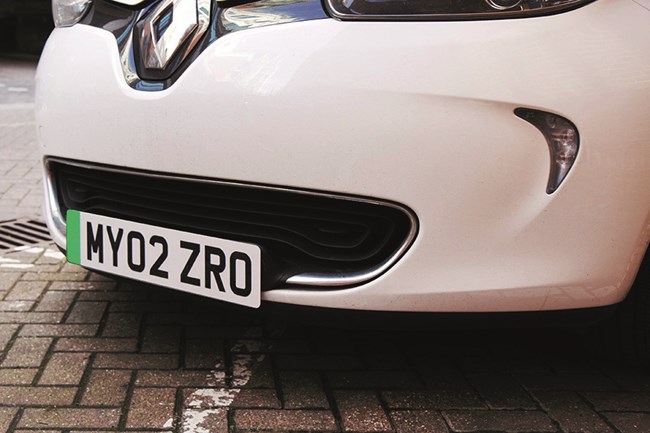 New number plates with a green band are to become available to all zero-emission vehicles -that means battery-electric or hydrogen-powered vehicles, but not plug-in hybrids. The plates will also be available for vans, taxis, motorbikes, as well as buses, coaches and HGVs.

The plates will still be white on the front and yellow on the rear, but will have a green band in the location of the national flag or GB sign. The green flash can be displayed in addition to a national flag and lettering, however.

The scheme will be opt-out, while owners and operators of existing eligible vehicles can also apply to get the plates for their older models.

Transport secretary Grant Shapps said: "Green number plates could unlock a number of incentives for drivers and increase awareness of cleaner vehicles on our roads, showing people that a greener transport future is within our grasp.

"From individual drivers, to business fleets, to cities and local authorities, green number plates are an exciting opportunity for drivers to show leadership and visible commitment to the future of the planet. They will provide powerful motivation to encourage drivers to shift to cleaner vehicles."

The government states that "the plates will make it easier for cars to be identified as zero-emission vehicles, helping local authorities design and put in place new policies to incentivise people to own and drive them".

This may be beneficial for discounted parking schemes and allowing EV drivers to use bus lanes at specific times of day. However, potential zero-emission zones in cities are likely to be enforced using automatic number plate recognition (ANPR) cameras, as is already the case with the London ULEZ and congestion charge zones. This technology matches the letters and numbers on the plate to the DVLA database and does not need the specific colour to make the distinction. In fact, a completely green design was rejected as it would have required extensive testing, which would delay the implementation.

Reaction to the new plates has been mixed. Paul Hollick, co-chair of the Association of Fleet Professionals, was positive, saying: "The announcement about green number plates is welcome news. There really is starting to be some fundamental movement within our UK market for getting behind the wheel of an electric vehicle rather than a petrol or diesel. It is vital for all fleets to realise that electric vehicles are no longer a topic for early adopters and this positive news will further increase awareness and visibility of EVs on the UK roads."

Lauren Pamma, electrifications lead at Lex Autolease, concurred: "It's encouraging to see that despite the challenges presented by the coronavirus outbreak, sustainability remains high on the agenda for fleets. Our business customers have a relatively strong understanding of the environmental and whole-life cost benefits of having EVs on fleet - especially when it comes to tax and national insurance costs - and remain focussed on making the transition where they can."

Edmund King, president of the AA, said: "Having a green flash on the number plate may become a badge of honour for some drivers. We support this concept, which shows that the EV revolution is now moving from amber to green."

Others still needed convincing. Commenting on the original announcement of the plan, RAC head of roads policy Nicholas Lyes said: "Incentives may make a difference in the short term and the possibility of free parking and the permission to use bus lanes at certain times could encourage some to switch. However, many drivers remain cool on the idea even with this encouragement. Also, if these perks were to do their job and encourage people to switch, councils would have to quickly get rid of them again as they'd be losing parking revenue and no doubt be accused of allowing bus lanes to become clogged with electric vehicles.

"Given their relatively high upfront costs, only those drivers that could afford to make the switch to an electric vehicle would benefit - leaving the vast majority who still rely on a petrol and diesel cars losing out."

Fiona Howarth, CEO of EV consultancy Octopus Electric Vehicles, said: "It is critical that we do more to incentivise a switch to green, clean transport - and although green number plates might be part of the solution, they also risk being just a gimmick for sandal-wearers.

"We know many EV drivers love to talk about the benefits of driving an EV, but others might prefer to drive clean and green without drawing attention to themselves - and so it's important that the other benefits of driving electric are really highlighted and further boosted."

At the same time, the government also announced a £12m fund for zero-emission vehicle research. Shapps said: "We're supporting small businesses to develop the transport tech of the future through a multi-million pound investment, ensuring that UK businesses remain at the forefront of low-carbon innovation and research."