The firm says systems will need to deploy 5G connectivity and artificial intelligence, while maintaining a human touch. 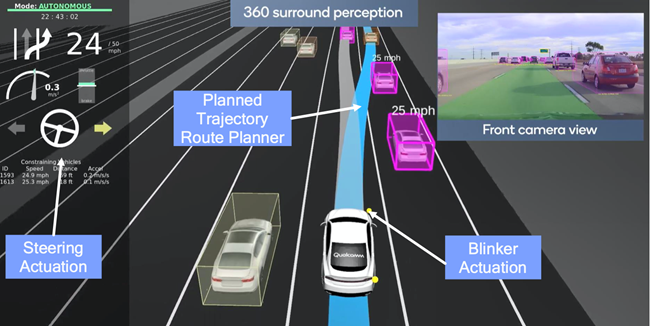 Future autonomous driving systems must have elements of human-like behaviour so as not to unsettle their passengers, according to tech firm Qualcomm.

The company has been explaining more about how it sees the future of smart transportation, and how this relates to its Snapdragon autonomous driving platform.

Product marketing director Thomas Dannemann explained that the company's scaleable technology could be applied by carmakers all the way from basic driver assistance systems to full autonomy.

He said that crucial elements to the development of autonomous driving are the arrival of 5G technology, and the implementation of artificial intelligence.

Dannemann said: "We will bring together 5G - very fast internet connectivity - with artificial intelligence, and edge computing, and these we believe are the components that will allow us to bring the car into the next generation of digitalised and connected variants of driving.

"It's no longer a dream or an idea, the OEMs are now in a position where they can really develop the products and bring them to the road very soon."

While the fundamental technology needed for autonomous driving is clearly of crucial importance, Dannemann explained that for it to really succeed, it needs to be deployed in the right way.

He said: "We call it human-like driving. There is nothing worse than if the car is starting to do things which you would not expect as a human driver.

"It does not help you if the car suddenly accelerates or brakes and you don't understand what the car is doing. So, you really want to make sure that the car is behaving in such a way that you would expect."

Dannemann explained that occupants of autonomous cars would need to be kept in the loop on decisions being made by its electric brain.

"If we are doing manoeuvres which are totally unexpected, that will be very frightening to passengers," he said. "So, we have to make sure that the car is either indicating or telling the driver what is going to happen.

"It is useful if you are indicating that the car is going to make a lane change, or start an overtake manoeuvre. These things need to be well prepared and communicated to the driver, so that the driver sitting inside the car can make sure that what happens is what is expected to happen.

"This is what we call the humanised driving algorithms, and here a lot of what typical humans are doing while driving is being adopted to the algorithms, and also [how] the car is going to steer and manoeuvre in the future."

The Snapdragon system involves a combination of radar and cameras, able to pick up not only other cars, pedestrians and bicycles, but also road features such as speed limit signs and traffic lights.

Dannemann explained that for such a system to work properly, radar alone is not sufficient.

He said: "Radar will give you information about how far an object is in front and how fast the object is moving. However, the disadvantage of just having a radar is you do not really know what you are seeing, you just see a reflection - that could be a reflection from a car, from a traffic sign, from something at the side of the road, so it is not 100% clear what you actually see.

"If you have a kind of cloud of reflections then you could probably say 'there must be something big in front', but you still don't have the understanding of what it is exactly.

"So, what happens is we are fusing [cameras and radar]. And suddenly you realise much, much better what you are seeing in front of you.

"You understand if it's a car, a truck, how fast it is moving, is it in the centre of the lane or moving left to right, and on top of that you will be able to detect the lights of the car, so you can see if the car is braking, or indicating to change lane."