Renault hopes its new hybrid E-Tech models will serve as a gateway to its soon-to-expand pure-electric range by convincing fleets and their drivers of the benefits of plugging in. 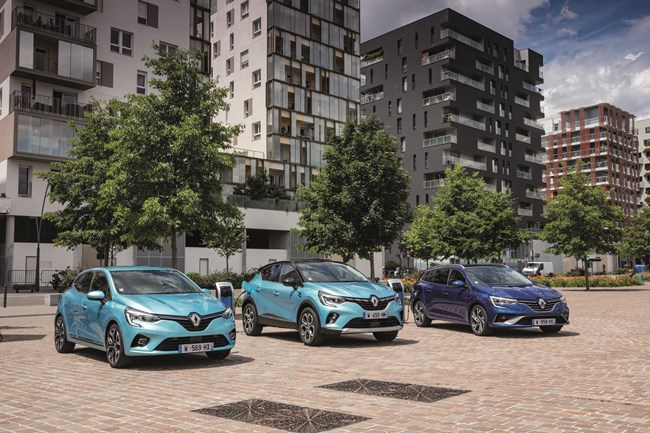 As car sales pick up again and sales of hybrids and electrics accelerate, it's worth noting that plug-in hybrids are still mainly the remit of the premium brands and they've yet to make a real dent in the lower segments. Renault won't be the first to offer small and medium-sized hybrids, with Toyota, Kia, Hyundai and Honda beating it to the punch in some segments, but with new E-Tech versions of the Clio supermini, the Captur small SUV, and the Megane hatchback and estate, its opening offer is quite comprehensive.

With the original Zoe pure-electric hatchback from 2012, Renault was very early in offering a credible electric car, so adding hybrid versions of its standard range is a logical step, offering customers a more gradual introduction to electrified cars.

UK MD Vincent Tourette said: "It's a kind of transition, a bridge towards full electrification. Hybrid and plug-in hybrid give us the opportunity to attract more customers today because the size of the [pure-electric] Zoe may not be right for them, or because they have a usage that is not well-suited to pure electric. They will now have the possibility to come to the Renault range with an electrified vehicle with ultra-low emissions and potentially move into our pure-EV range tomorrow.

"We will have more and more customers that have always been with ICE (internal-combustion engine) vehicles and who will use hybrid and plug-in hybrid in fleet mainly as a gateway toward [full] electrification."

Those other pure-electric cars should arrive fairly soon, as Renault unveiled the Morphoz concept car at the (virtual) Geneva motor show in March. It previewed the Renault-Nissan Alliance's CMF-EV platform that will underpin a wider range of pure EVs for today's E-Tech buyers to move on to.

The launch of the plug-in hybrids is certainly well-timed for UK fleets given the 2020 BIK rates, so Tourette hopes the E-Tech models will kick-start a recovery for fleet sales: "The restart in fleet is a bit slower than anticipated, so I also see the introduction of these new technologies as a nice way forward. In terms of running costs, these cars will be incredibly efficient. I think they can be an opportunity to reassure this part of the business to renew their fleet of vehicles with E-Tech technology."

Meanwhile, the hybrid models also take over the fuel economy baton left by declining diesel sales, even if diesel isn't going to disappear from Renault's range any time soon. Tourette explained: "There's still a customer demand for diesel that is probably a bit more specific than it used to be. Some of the previous diesel demand might move towards hybrid and plug-in hybrid, but you have to be careful because hybrid and plug-in hybrid are a different proposal, much higher up in the range, in terms of performance, but also in terms of equipment and pricing.

"Diesel, for many reasons - not always rational ones - has gone down a lot and will probably remain marginal. And that's the reason why we're coming with hybrid, plug-in hybrids and full EVs. We now have a demand from all these customers that have quite different needs. For example, we were selling a lot of diesel engines for people driving in cities. Now we have a much better-adapted proposal for this customer."

The first signs are good, Tourette reckoned: "From the beginning of June we've seen quite a strong restart of the new car business in registrations, but more importantly in order intake. We've been doing brilliantly in June, in July, and we are also well ahead in August. The demand, the interest, for electric vehicles is very high, but to be fair it has been since the beginning of the year . We see that in terms of website traffic, the leads, the inquiries, the Zoe is top among all models. So the demand [for pure EVs] is coming after many years of being a bit sluggish."