Even though the S-Class, Mercedes' luxury flagship, is never going to be a fleet staple, it does preview technology that may become commonplace. 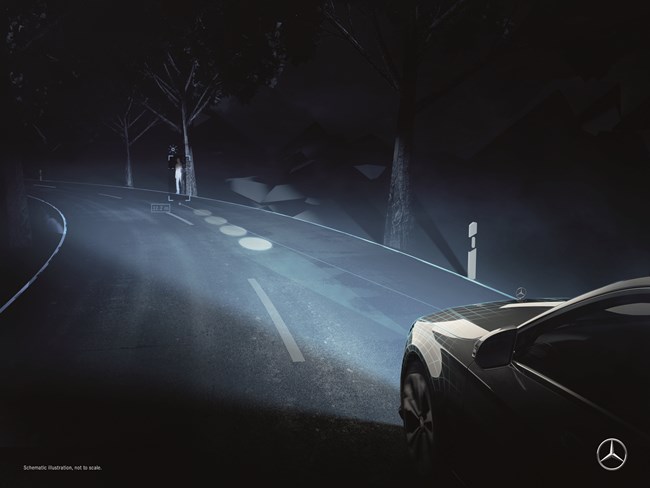 Throughout the years, Mercedes-Benz has used the S-Class luxury saloon as a launch vehicle for new safety technology that later trickles down to the lower models, and even gets adopted by other manufacturers. Stability control, for instance, has been mandated on new cars in the EU since 2011, but debuted on the S-Class in 1995. While most company car drivers can only dream of an S-Class, they might very well see some of its new safety tech in their cars soon.

Modern safety advancements mainly revolve around active safety - preventing accidents from happening in the first place. To enable those, the new S-Class is equipped with five radar sensors and five cameras keeping an eye on traffic conditions. According to Dr Michael Hafner, director for driver assistance systems and active safety, these are the kind of features that will likely trickle down: "The great thing on the active safety side is that it's all about finding new situations where we try to help our customers."

Although active safety systems such as automatic emergency braking and lane departure warning have been relatively common on new cars for the past five years, death and accident rates have largely stagnated. Hafner said its therefore important to focus development on specific areas: "If you look deeper into the statistics, you'll see that more and more vulnerable road users are affected, and that alcohol and drug abuse is unfortunately rising."

One feature designed to combat the latter is active emergency stop assist, which can bring the car to a stop when it senses that the driver is no longer responding. Compared to previous versions, it now also works when adaptive cruise control is switched off, and it can make a lane change autonomously if necessary. To make this feature as accurate as possible the car also uses cameras to detect if the driver 'microsleeps' by monitoring their eyelid movements.

Looking out for vulnerable road users, the new S-Class monitors pedestrians when turning into side streets, stopping the car if necessary. It can also warn the occupants if they are about to open a door in front of a passing cyclist or pedestrian.

One issue with these types of advanced safety features is that they can often be intrusive, and drivers end up switching them off. Hafner said this is not a new problem and solving it is a question of making the systems iteratively better and minimising false positives. He added: "The complexity of situations in traffic situations is so huge that it takes massive effort and engineering, squeezing the last few per cent out of your system."

Trying to mitigate distracted driving in today's cars presents a further difficulty. Modern interiors increasingly trade physical buttons for touchscreens, and this can often cause a backwards step in usability, as the driver might have to take their eyes off the road for longer to find the right virtual button. Mercedes boasts in its press release that the new S-Class features 27 fewer buttons than its predecessor, but Hafner reckoned this won't be an issue: "If you don't have to go deep into the menu structure a touchscreen doesn't work any differently from a button. Not every button is used with the same frequency, so the idea is to put the more relevant things like the temperature or the fan controls where they are more or less always available. You'll find them in the very same spot, and you'll know where to press. We use driving simulators and a lot of customer studies in order to ensure that the overall time that you need for using the system still doesn't distract you from your driving tasks."

If the worst should happen Mercedes has a world-first feature on its hands in the shape of a frontal airbag for the rear passengers. Given that the S-Class is the chauffeur's car of choice for many executives, you might imagine that this would have been introduced years ago. However, Hafner explained: "The rear-seat airbag is more complex than a front-seat airbag because people's seating positions in the rear can be quite different from each other. You could have a small child, you could have big people, and the distance to the front seat might be very different. That is why we needed a very flexible structure in the airbag."

Rather than one cushion, the rear-seat airbag consists of a tubular structure that supports a central cushion that is filled with ambient air, rather than a gas charge like normal airbags. This centre section is softer than traditional airbags, making it suitable for a wide range of body sizes as well as a rear-facing child seat.