Better get yourself connected

The buzz-phrase 'connected car' has been bandied about for years.
Jack Carfrae asks how fleets can actually use the data to sharpen up SMR. 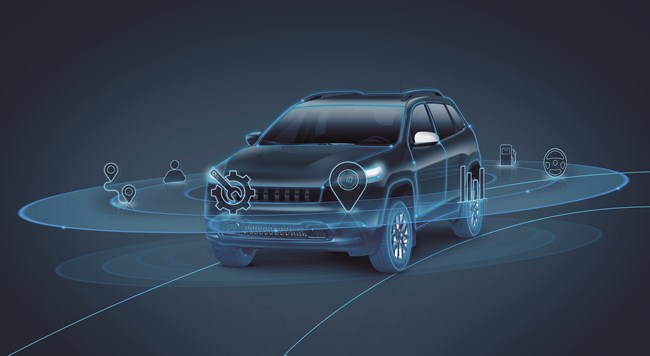 Have you ever sat through a conference - more likely a webinar, these days - and listened to somebody talk about all the great things you can do with connected cars? The expression has been thrown around for a dog's age and is usually accompanied by terse discussions about who owns the data.

Behind the politics, modern cars rack up oceans of information, which has the potential to be channelled into anything from safety to route planning or e-commerce initiatives. Service, maintenance and repair (SMR) is also on that list, and it's a big one for fleets; get sight of some relevant data, apply it accordingly and you can instantly better your efficiency and bottom line.

The problem is access. If your fleet is made up of more than one brand of vehicle, then, by itself, the data is almost redundant, because the formats are not universal. Ford, Vauxhall, Volkswagen, for example, do not issue conveniently identical data reports, so getting hold of anything meaningful across manufacturers is not straightforward.

Some experts to whom Business Car spoke believe it is because OEMs are exceptionally protective - either commercially so or because they are frightened of a data breach on a par with the VW emissions scandal - or because they are not really sure what to do with all the information, less still how to present it to fleets or consumers in a useful fashion.

It's a paradox, because telematics companies previously lauded the idea of ditching physical black boxes. As the prospect of drawing information directly from vehicles looked possible, Business Car frequently heard - and admittedly published - optimistic claims to the tune of 'we won't have to supply and fit the boxes; there won't be any downtime'. But if it's cross-brand SMR data you want, a physical telematics box is now more important than ever.

"If you've got multi-brand fleets, the simplest way to get SMR-type data is just to fit a device and ignore the connected data coming from the car," says Nick Walker, a consultant specialising in telematics and connected cars and former head of RAC Telematics. "Consent is a big topic right now in this industry, and the beauty about fitting a box is you are giving it. Whereas, if you buy a car and there's a box in it, you've actually got to go out of your way to share data with the OEM and then allow the OEM to share data with anybody else."

It still depends on the manufacturer's approach to access, but single-brand fleets are easier. Fleet Assist, for example, absorbs data from BMWs to monitor the condition of the cars and flag up faults.

"[The feed] doesn't just provide us with the service information, it will also tell us miles to run on front pads, rear pads, if a vehicle is low on battery voltage and some timed elements, such as the air filter needing to be replaced," explains managing director, Vincent St Claire.

The company phones drivers when it spots that their car is need of work and, assuming the fleet has preferred dealer - as is often the case with leased vehicles - it can book service or maintenance appointments there and then.

"Drivers are sometimes quite surprised that they've had an outbound call, and they'll say, 'how did you know that?'" adds St Claire, "but it makes the whole thing a lot more efficient, because while you are booking it in for a service, if the vehicle has only got another 1,000 miles to run on the front brake pads, for example, you might take the decision that it needs them doing as well."

The way to get to all this data is through the controller area network (CAN) bus - crudely, the automotive equivalent of a human central nervous system, which absorbs and communicates information from different points throughout the vehicle - or the on-board diagnostics (OBD) - the tech responsible for switching on dashboard warning lights, the gateway to which is the 16-pin plug socket mechanics use to search for fault codes.

"If you understand the protocols of how the CAN bus operates, you can obtain thousands of bits of data," explains Richard Perham, managing director of Airmax Remote, "examples would be battery voltage, distance to next oil change, EGR valve position or AdBlue levels. Anything like that could be interrogated, but you need to have an in-depth understanding of the communication protocols to the vehicle to be able to gather that data."

Keeping tabs on such parameters can lead to an almost predictive approach to maintenance. Perham says different users like to monitor different issues, so if a leasing company wanted to flag up, say, the five most notorious fault codes or identifiable problems, it could effectively establish an early warning system, allowing fleets to reserve a spot at a garage before things escalate.

"If you can monitor the EGR valve position, then you have a good estimate of predictive faults, such as DPF problems," he adds.

The end game for those who specialise in processing data is effectively to automate the booking process for service and repair appointments and intertwine it with the aforementioned predictive concept. Epyx has just made a move in that direction by launching what it calls a Driver Booking Module within its 1link Service Network platform, which allows drivers to reserve a slot at garages approved by the user (typically a leasing company). They can suggest up to three potential dates, which will then be confirmed by the garage and no action is required on the part of the fleet or the leasing company.

"You [the driver] pick your diary dates, you can interact with the garage directly through the portal. and you take away that human involvement of having to ring up the lease company and say, 'my light's come on, I need this that or the other'," explains commercial director, Debbie Fox.

The company is hoping the initiative will snowball into a greater degree of autonomy around the relationship between connected car data and the SMR process. Fox concedes that it will require buy-in from drivers but reckons the lure of not having to ring up to arrange a service should be enough to tip the scales, especially if Epyx's leasing customers are willing to give it a whirl with a few large, eager fleets.

More broadly, she thinks it could become a talisman for new functions as the technology develops, such as automatic diary entries in dealer management systems and better notification and execution of recall work - which can be a long and lumpy process with a leasing company, fleet and driver at play - as well as an early indicator of electric vehicle SMR costs, details of which are currently thin on the ground.

"That's a bit of an early one, yet - what the SMR budgets look like on EVs - because there are so few at the moment. They're growing rapidly, and people will need to learn really, really quickly, but you're suddenly starting to set SMR budgets today on an electric vehicle that's relatively new to the marketplace in terms of what it's going to cost you over the next three years."

The technology could even reach the stage where garages are extremely well prepared in advance of a vehicle arriving. Theoretically, a workshop would know the full details of the car ahead of time, along with which, if any, warning lights were illuminated and order whatever parts they need before it rolls onto the forecourt.

"They could have all this served up so that when the car comes in, they actually know exactly what needs doing without putting it on the ramp, because technology has told them that," says Fox, "they could price it, they could make sure they've got the right ramp space, the right time, the right technicians on board."

Airmax Remote is thinking along the same lines, and Perham reckons it could happen "within a year or two. We'll be able to. [see] where the vehicle and the driver are located, and we'll then be able to start automatically booking servicing via our platform and. notifying the dealers on what to order in advance."

Assuming such feats come to fruition, the SMR process stands to become a lot more hands-off for everyone in the chain of leasing companies, fleets, drivers and garages. It is, however, worth reiterating that the fleets best poised to take advantage of this will be those running aftermarket telematics, and the quality of the data and how it is presented are fundamental, so choose your provider wisely. As Walker says, it can be a case of less is more.

"The last thing a fleet manager really wants is just a bunch of data that tells him at the end 'you don't need to do anything,' after he spends hours looking at it. What he wants is a list of things that he needs to do. The telematics guys, who are getting it right, are making you aware of what action you need to take rather than just giving you a list of odometer readings."