A new white paper claims potentially huge benefits could be delivered by rolling out vehicle-to-grid charging technology to fleets. 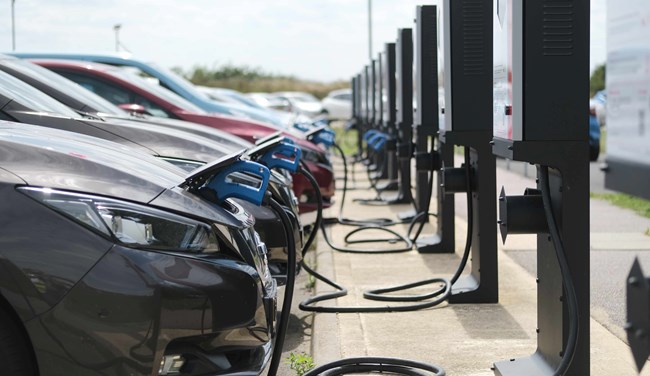 EVs equipped with vehicle-to-grid (V2G) technology will have a critical role to play in reducing carbon emissions, while delivering big financial advantages for fleets.

That's according to a new white paper published by Nissan, E.ON Drive, and Imperial College - partners in the e4Future commercial fleet V2G project.

V2G technology allows electricity to flow in both directions to and from EV batteries, allowing energy stored in a vehicle to be sold back to the grid when demand for power is high. The vehicle can then charge when demand is lower, or when levels of power generated from renewable sources are high, helping to reduce CO2 emissions.

Fleet vehicles are said to often be well suited to V2G applications, due to their regular and predictable usage, and because many return to base at the end of each working day and sit idle overnight. This provides ideal conditions for V2G to send the energy stored in their batteries to the grid, before ensuring the vehicles are fully charged again by the time the next working day begins.

The white paper, 'The drive towards a low carbon grid: Unlocking the value of vehicle-to- grid fleets in Great Britain', argues that this technology has the ability to deliver major benefits for both fleets and the energy sector.

It says that the annual financial benefits from fleet V2G charging could range from £700 to £1,250 per vehicle, while the effective CO2 emissions incurred by the vehicles could be as low as -243g/km, due to the assistance they offer with decarbonising the wider power grid.

It also says each vehicle could lead to electricity system operation cost savings of up to £12,000 per annum, and a CO2 reduction of around 60 tonnes per annum.

However, to deliver the full potential of V2G, the paper says a number of measures will need to be implemented. This includes increasing the demand for EVs themselves, through policy measures such as increasing both financial and non-financial incentives for both retail and fleet buyers, and ensuring businesses are well educated about the benefits of V2G.

The paper also calls for incentives for 'energy aggregators' to provide V2G services, in order to help them make a business case for the technology, and for the rollout of V2G charging infrastructure to be accelerated, arguing that while installing standard chargers may be cost-effective in the short-term, it would be better in the long run for V2G to become the default option in new charging installations. To help with the latter point, it calls for V2G chargers to be eligible for greater government grants than regular chargers.

The Nissan Leaf is currently the only volume-manufactured electric car on the UK market with V2G technology, although it also features on Nissan's e-NV200 electric van.

Nissan Motor GB managing director Andrew Humberstone said: "There is enormous potential in vehicle-to-grid to deliver huge savings, both in financial terms for electricity system operators and vehicle fleets, and in environmental terms, by significantly cutting CO2 emissions across the UK power system. Nissan is at the forefront of efforts to realise this potential."