Two decades or so ago Kia was a low-cost, also-ran. But with its highly impressive EV6 it looks set to go premium. 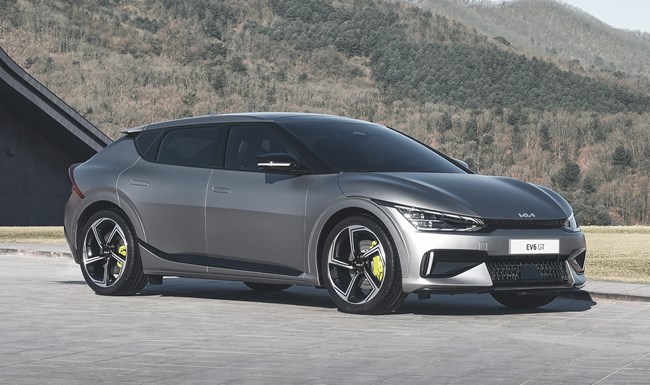 The idea of using a Kia to represent your business on any level back in the very late-90s would have been greeted with a chuckle at best, or likely much worse. A first-gen Sportage 4x4 might have impressed at a field-based boot fair or a Sedona mk1 MPV at the railway station taxi rank, but hardly anywhere else.

Most UK fleets are now fully aware of the Korean brand's rise from that low base to mainstream mainstay - with continuous successful generations of the Rio, Ceed, Sportage and more - but the 2021 EV6 and its GT offshoot feel like an even bigger jump again. The recent Stinger sports saloon wasn't bad, but it was still chasing German tails with me-too, old tech and design. By contrast this full-electric crossover utilises an all-new electric-only platform and appears way more distinctive. It also looks more premium than the VW ID.4, more stylish than the divisive BMW iX and may even be able to rub shoulders with a Jaguar I-Pace, with which it shares very similar proportions. The EV6 is only 2mm shorter, 5mm narrower, 15mm lower and with a 90mm smaller wheelbase.

But the EV6's still-long wheelbase unlocks a very spacious cabin due to its E-GMP platform shared with its sister model, the Hyundai Ioniq 5. The Kia is 55mm longer (4,680mm) than the Ioniq 5, 55mm lower (1,550mm) and with a 2,900mm wheelbase, 90mm shorter. Both vehicles benefit from great space between the two axles, which allows for plenty of room to house the batteries low-down and create a flat-floored, spacious cabin above (all akin to the aforementioned I-Pace). Beyond the seating, the EV6 offers 520 litres of boot space with rear seats up, 1,300 litres seats down and with an extra 52 litres available in its front boot on 2WD models (or 20 litres on AWD models).

Unlike the Ioniq 5, the EV6 will launch in the UK, initially at least, with just one long-range 77.4 kWh battery, which in two-wheel drive guise is good for 229hp and 316 miles. A 325hp AWD version that can hit 0-62mph in 5.2 seconds will also be available, and a 58.0 kWh unit with circa 260 miles of range could follow in the UK at a later date. With 800V and 400V charging capability, the EV6 can get from 10-80% in 18 minutes or add 60 miles for a quick top-up in fewer than five minutes. It's also able to use its battery to power auxiliary tech like a 55-inch TV and aircon for 24 hours - if you want to stay cool while binge-watching a boxset for instance. Six levels of re-gen via steering wheel paddle-shifters allow the EV6 to recoup energy on the move to boost range and two 12in screens within one large curved display promise easy touch-control tech. Real buttons still play a part as well though and will continue to do so, as Kia's (ex-BMW and Infiniti) global design boss Karim Habib explained: "Screens allow the user to individualise their experience but in the future, the key will be a healthy balance between what you access directly and what you need to push into the background until you need it. So I think it's both - screens and hard buttons."

Pricing for the new EV6 certainly places Kia in the premium realm in a way its current e-Niro EV doesn't. The EV6 will start from £40,895 with a sportier GT-Line version beginning at £43,895, both with an estimated UK delivery time of October 2021. A slightly longer, lower, wider and much more powerful 584hp dual-motor AWD EV6 GT, capable of 0-62mph in 3.5 seconds with 21in wheels and sporty bucket seats, will arrive a year later from £58,295. That model is unlikely to be a big fleet player, but if the UK fleet/retail split for the e-Niro is any guide - in the past 12 months 53% of its sales went to business - the EV6, in its less flamboyant and sporty guises, could still be an important car.

It's important also, as the first of 11 new full-electric models from Kia will arrive by 2026. Seven will sit on the same bespoke E-GMP electric platform and four derivative EVs will be based on existing models. As such, it heralds the next chapter of Kia's shift into electrification under the new brand slogan 'movement that inspires', and should see full EVs, PHEVs and regular hybrids make up 40% of Kia's total sales by 2030. All of which makes Kia's late-90s fortunes seem just that, from another century altogether.