EVs: Service with a smile

Electric vehicles are often praised for their lower SMR costs. Jack Carfrae asks how much cheaper they really are and what fleets should expect from EV maintenance. 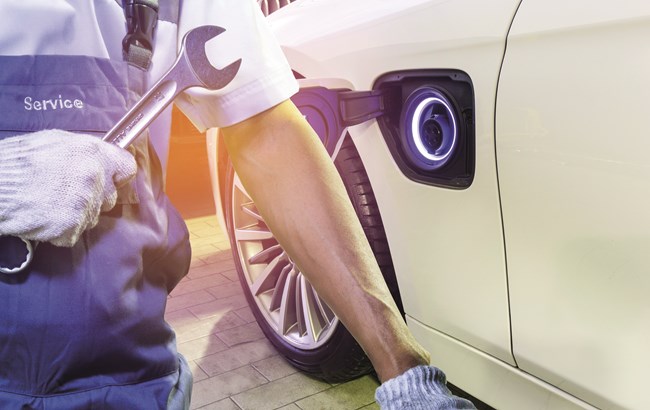 There are fewer moving parts, no oil filters and regenerative braking means you barely ever touch the pedal on the left. That is usually what we hear in relation to electric vehicles and how cheap and easy they are to maintain compared with petrol or diesel equivalents.

Business Car is not disputing that, but the costs and downtime of SMR are far from insignificant, and we think fleets should have more than sweeping statements at their disposal if they are to be truly informed about the realities of running EVs.

The good news is that evidence is mounting to support those long-touted claims, although the specialists we quizzed for this article all applied a caveat to their statements: that the pool of vehicles from which to draw data is far smaller and younger than the diesel and petrol vehicle parc, while understanding long-term EV usage trends is a work in progress.

What we know so far based on existing data is that the time, parts costs and typical prices fleets pay for comparable SMR work are substantially lower than for internal combustion models. According to Fleet Assist, average labour times are 33% shorter for an EV than for ICE cars and vans, while parts and average transaction values are 28% and 16% cheaper respectively.

"That's obviously down to less moving parts, but it's mostly brake work," says Vincent St Claire, the company's managing director. "It's rare to have pads and discs changed on an EV, and that's customary stuff for an ICE car."

He adds that EVs are now generally serviced at around the same mileages as ICE models, because the former's ranges have eked out and drivers are more comfortable with longer trips, so it is a fairer contrast.

"EVs were always lower in terms of SMR cost, but getting an accurate handle on that used to be difficult, because they were actually doing quite a lot less mileage. Now, they are more or less on par with ICE mileage, so there's more of a direct comparison. We are still on a learning curve, but we are getting closer to comparing apples with apples."

A third off your labour cost is more than a little appealing, and some believe that will reduce even further alongside greater EV sales. Mark Fennelly, head of global consulting at ASE Automotive, explains: "From a labour perspective, we will probably spend a third of the time as we currently do. We're currently looking at about 2.4 hours [average service time]; we're saying it will probably be about 0.8 hours [for EVs]."

As delicious as that sounds for anyone signing off SMR bills, it is a bit of a worry for dealers and workshops, for whom aftersales is a massive revenue stream. Add to that the need to train technicians to safely work with high-voltage components and, although labour time is lower, the cost of service and maintenance could increase because of the skills and staff required.

"I think the cost of that 0.8 will rise significantly, because the speciality and technology required limits the amount of people who can do it, so that will allow prices to rise," adds Fennelly.

While there is no legislation specifically relating to EVs, garages are answerable to the Health and Safety Executive's Electricity at Work Regulations 1989 regulation, and the organisation also issues non-regulatory guidance for businesses working on plug-in vehicles.

Some workshops have put staff through the Institute of the Motor Industry's (IMI) TechSafe courses, which train technicians in how to properly handle EVs. St Claire says Fleet Assist has a seen a 140% increase in garages across its network with staff trained to that standard since 2019 - 4,000 of a circa 5,100 total. However, IMI CEO Steve Nash suggests there is a long way to go before the UK's garage network is properly tooled up to deal with EVs. "There's around about 275,000 technicians in the UK, that we know of, who make a living out of servicing and repairing cars, whether that's in the franchise sector or independents. So far, only 6.5% of them, based on our latest figures, have actually engaged with becoming accredited to work on electric vehicles."

Given that there is already a deficit of technicians in the UK (add it to the list of industries seeking staff), that number might foreshadow what could be yet another skills shortage. One source told Business Car that garages are already in the habit of poaching technicians, especially highly qualified ones, to the extent that many are now reluctant to advertise that they have well-trained individuals on their staff. Throw in an increasingly electric vehicle parc, and it could point to yet another area in which prices could rise in the long run.

If there is an elephant in the EV SMR room, it is tyres. For starters, the near-instant torque delivery is said to take its toll on at least the driven wheels. However, Brian Porteous, technical manager at Michelin, claims that is less of an issue than we might think.

"There are some schools of thought that suggest EVs will get through tyres more quickly, because they have loads of torque, but I spoke to some people who have experience of this from a tyre fitting point of view. [and] what's emerging is that tyre wear rate is really a consequence of driving style and usage, rather than the vehicle. At the moment, it's looking quite similar to ICE vehicles."

The bigger problem is that many EVs need to be fitted with the original, manufacturer-spec tyres to maintain peak range. It does not rule out the possibility of fitting different replacements, but doing so could, according to Porteous, hamper the range by 10-20%.

He explains: "There are lots of internal combustion engine vehicles with homologated tyres specified by the manufacturer, so nothing changes in that respect. If you change from those OEM tyres, then yes, you can alter certain performance characteristics - fuel consumption, noise, handling. For an electric vehicle, yes, you could change the range.

"But there are certainly electric vehicles running non-OEM tyres with an acceptable compromise in range and an improvement in some other area of mobility. Even if it took 10% off the range but you had the mobility that you needed, then it would be fine."

It poses a unique issue for fleets with contracted tyre suppliers, because a single brand may not do the trick when the vehicle is so sensitive to the type of rubber. Porteous concedes that it has made life more difficult for the tyre companies.

"There are situations where that is the case and a vehicle exists on our contract but requires a [different] tyre. We can suggest a Michelin tyre where it's possible, but there are certainly some situations where it's not. We have to source, somehow, through the tyre dealer network, an appropriate tyre for that vehicle."

Michelin is currently developing a calculator for fleets to illustrate the difference in range between fitting factory-spec tyres and something different. It hopes to have it ready by the end of the year.

"We're actually working with some of the fleets at the moment to build a calculator that allows their users to estimate what the difference might be if they were to fit an axle pair of a different tyre, for example, or a completely different type of tyre," says Porteous. "We're getting questions from fleets, particularly as we're moving towards winter, in relation to changing the OEM tyre for an all-season tyre or a winter tyre, for instance."

What could the energy crisis mean for EV running costs?

The UK's well-documented energy crisis is almost certain to raise the price of electricity, which will inevitably have a knock-on effect on the cost of running plug-in vehicles. The bill for a charge versus a full tank is one of EVs' strongest suits - if not the strongest - so any sign of an increase is a fly in the ointment for plug-in vehicles.

Speaking on condition of anonymity, a respected fleet industry electric vehicle specialist gave Business Car the following statement regarding future costs: "Energy prices are increasing, led by gas, but then so are petrol and diesel prices. We probably need to see where the prices for electricity and diesel and petrol settle before we can really assess the impacts, but I think there is enough headroom between the cost of electricity and diesel to keep electric cars competitive.

"Leasing companies and fleets will need to increase their fuel elements in whole-life cost (WLC) calculations for both traditional fuels and electric, unless they use the AER rate for electric, in which case it will be the drivers complaining of increasing costs, not the companies.

"We are already seeing drivers wanting higher AER rates - see the BVRLA's and AFP's recent campaigns - but what drivers may not consider is that they are getting massive BIK discounts for EVs, and if the fuel cost in the WLC calculation increases too much, they may no longer be entitled to an EV for their company car or, at least, they may have to make a personal contribution to have one. Sometimes, you need to look at the bigger picture."