With the launch of the full-electric Ioniq 5, Hyundai has finally shaken loose from its 'value-led' tag. Guy Bird talked to the car's global design chief to find out how, why and what's next. 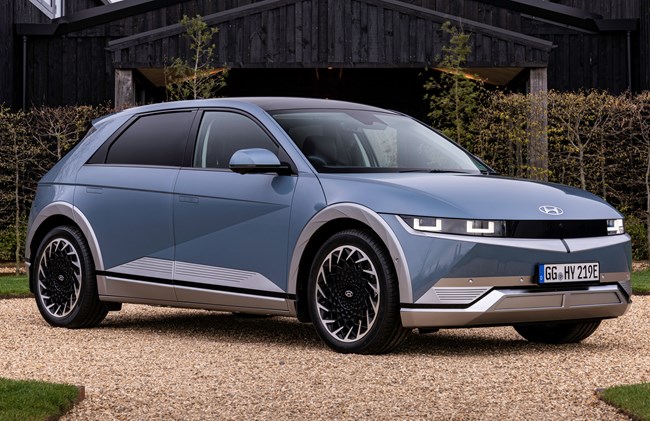 Compare the design, quality and technology of a 1997 Atoz with a 2021 Ioniq 5 and there couldn't be a clearer message of how far the South Korean brand has come in a relatively short space of time. Where the Atoz was me-too, old-tech, low-cost and also-ran, the Ioniq 5 blazes an EV trail right up there with the best of volume carmakers and could arguably steal sales from a few premium players too. How so? Because since the mid-2000s and early 2010s, Hyundai has accelerated the time, talent and budget dedicated to future product development in a way rarely seen in rival carmakers. Case in point, its current top two designers, Luc Donckerwolke and SangYup Lee, are both ex-Bentley hires, and the quality and thoughtful design of the Ioniq 5 represents one of the first production cars to fully bear their stamp.

The full-electric hatchback unveiled in late February 2021 - with UK deliveries due to start in mid-summer - is close in shape to the widely-lauded 45 concept unveiled in late 2019 and inspired by the Giugiaro-penned 1974 Hyundai Pony. But at the Ioniq 5's heart is a bespoke new EV platform, which allows for cabin-maximising proportions. At 3,000mm long, the Ioniq 5's wheelbase is massive in comparison with its overall 4,635mm length, as senior EVP of Hyundai global design, SangYup Lee explained in our one-to-one interview: "This is a good base to start, instead of conventional interior styling and rearranging furniture from internal combustion engine packaging history. The Ioniq 5 is mid-size but its interior offers something mid-to-large in terms of legroom. We really wanted this car to have the maximum interior space within its boundary. The consequence for the exterior was to put the side glass as 'outboard' as possible. The car doesn't have a 'shoulder', so the glass doesn't go inward. It's all about space innovation."

Having a tailor-made EV platform puts it in the same company as the Jaguar I-Pace and despite their differing silhouettes, the two cars share remarkably similar dimensions - the I-Pace is a bit longer (+47mm), lower (-40mm) and with a fractionally shorter wheelbase (-10mm). The Ioniq 5 is a lot more than just an EV with a spacious cabin though. One innovative option is the movable centre console and armrest - seen recently in a similar form in the Renault Scenic - but in the Ioniq 5, due to a steering wheel-mounted gear selector, allows for a walk-through flat floor, while another innovation is its 'zero-gravity' seats, which allow for a lounge-like seating position when the car is stationary.

Despite the £36,995 starting price for the 170hp 58kWh RWD version, the majority of the Ioniq 5 models will cost more than £40,000 and top out at £48,090 for the 305hp 73kWh AWD Ultimate. As the models mentioned suggest, there will be 58kWh and 73kWh battery packs with up to 238 and 298 miles of range respectively, with rear-wheel drive and all-wheel drive options across three trims, SE Connect, Premium and Ultimate. Hearteningly, the main instrument panel with twin driver and centre 12.5in screens is standard on the base model along with Apple Carplay and Android Auto, rear-view cameras and satnav-based cruise control. Also standard is 800V charging to enable quicker recharging, dependent on charger type.

About 2,000 Ioniq 5s are earmarked for the UK in its first year on sale, out of 70,000 worldwide with a global production ramp-up to 100,000 in the second year. With those relatively low UK numbers, the Ioniq 5 is very much a halo product for now, but still at the vanguard of the brand's broader move upmarket. Lee does see a limit to this upward trajectory though. "Hyundai has no intention of going into Mercedes or BMW territory - we have Genesis for that," he reasoned, "but within the volume brands, we want to be in a higher position. At the same time, we still created the i10 and i20, which are good-value cars, so the price has to be reasonable."

As to the future, Lee points to more full EVs that will follow the Ioniq 5, but don't expect them to all look the same. "The Ioniq 6, inspired by the Prophecy concept, will launch in 2022 and we're working this year on a concept, which will inspire the Ioniq 7 and be more of a future SUV. It's completely different, just like the 45 concept was to the Prophecy. The pixel is the design element that connects all these EVs. We're the first brand to major on this, so we aim to take full advantage. When you see a pixel on a car you'll know it's a Hyundai."