As the new C-Class breaks cover, Guy Bird talks to Mercedes's top brass about its new tech and diesel PHEVs. 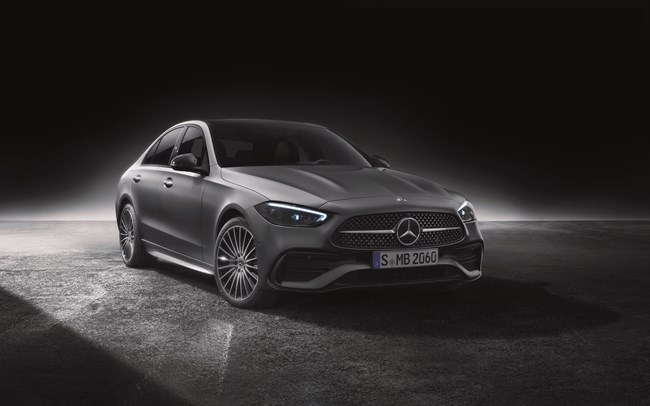 The headline news for fleets in the sixth-gen C-Class is that Mercedes is sticking with both diesel and petrol plug-in hybrid vehicles (PHEVs), a dual approach currently unique in the market.

Mercedes also has form for making its PHEVs offer greater real-world electric range. The large SUV GLE de launched in late 2019 has a class-leading 60 miles of EV-only range, and that figure is now matched in the C-Class PHEVs (almost double the official 35-mile range of the previous C-Class plug-ins). This improvement has been made possible by the use of a much bigger 25.4kWh battery in the C-Class (the old C uses a tiny 6.2kWh unit), and also lowers BIK tax considerably. That's because from the April 2021-22 tax year, sub-50g/km CO2 PHEVs that can drive fewer than 30 electric miles will attract a 13% BIK rate, while those that manage 30-39 miles will be at 11%, and cars that slot into the 40-69-mile bracket - like the new C-Class PHEVs - will only pay 7% BIK.

The new Mercedes PHEVs can also DC-charge the battery to 'full' in just 30 minutes via a 55kWh rapid charger, a speed previously reserved for (only some) full EVs. An 11kWh charger takes 2.5 hours to gain those 60 miles, and a more regular 7kWh home charger 7.5 hours. It's a key USP of the new C for chief engineer Christian Früh: "For many journeys, our customers will never use the combustion engine. Depending on customer behaviour and route, the carbon footprint can be as good as a BEV."

Despite the bigger battery, boot capacity has stayed the same for the saloon (455L), and improved by 30L in the estate to 490-1,510L. Most passenger dimensions (shoulder, leg, headroom) have been boosted too, and both cars' overall length increased to the same 4,751mm for saloon (+65mm) and estate (+49mm). Both body styles are 10mm wider, a little lower and share the same 2,865mm wheelbase (+25mm).

But why so much emphasis on the PHEVs, when in 2020 C-Class plug-in hybrids only accounted for 10% of the previous saloon and estate sales? Because although the bestselling overall C-Class engine is currently the regular diesel C 220 d, the estate's second bestselling engine is already the C 300de PHEV. Given the way the tide (and future legislation) is turning against regular internal combustion engine cars, this percentage is only going to increase, especially as the new Mercedes C-Class PHEV range is so compelling in terms of increased practical range and tax breaks. The only downside for potential PHEV customers is a wait until December 2021 for the C 300 e, and into 2022 for the C 300de.

All diesels will be compliant with the RDE2 emissions standard at UK launch too, so usefully avoid the extra 4% BIK tax diesel levy.

While the new C-Class exterior design is evolutionary, the interior is a bigger jump, featuring a stunning 'mini-me' S-Class-style cabin with a 'floating' and portrait-shaped 9.5in centre touchscreen as standard (an 11.9in screen is optional). A fingerprint scanner below the screen allows quick logins to the system, which also accepts 'over-the-air' software updates (like smart phones). Exact prices have not yet been declared, but expect them to be roughly 10% more than the previous model - starting at circa £38,000 for the saloon and £39,000 for the estate - and with the C 300 e PHEV beginning at £43,000 and the C 300de from £45,000.

The only burning question left at the end of the recent digital round-table press conference Business Car attended was whether there will be another C-Class (mk7) after this one, given there are EQ-badged Mercedes EVs aplenty arriving soon. As the brand's model life cycles are still in the six to seven year range, and the ban on purely petrol and diesel-engined new cars in the UK starts from 2030, it's just possible - and the new mk6's partly electrified range could be developed further without becoming fully electric.

After some (virtual) prodding from journalists, Früh finally gave his personal opinion, rather than the company line, saying, "I don't think this is the last C-Class." But in six years' time, who knows what the vehicular landscape may be. Meanwhile, at least Mercedes has one of the most compelling PHEV ranges on the market and the latest C-Class versions will add to that.