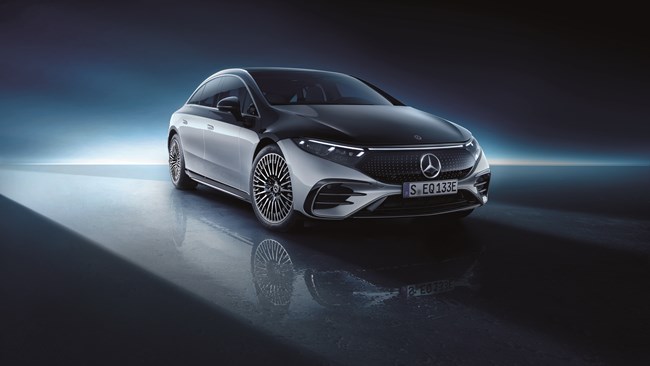 Any time a new S-Class comes around, which isn't that often - Mercedes has only launched seven generations in just under 50 years - the wider industry tends to take note and also watch as its advanced technology trickles down to the rest of the premium German brand's range. That may be true of the latest S-Class too, but for the real cutting-edge of Mercedes know-how, the world is now looking to the all-new EQS limousine instead. Why?

Because the S-Class, while still bristling with technology, wasn't the car chosen to showcase the company's new electric platform called Electric Vehicle Architecture (EVA) nor indeed its ground-breaking, fully-digital instrument panel. The powertrain is impressive too. The 333hp rear-wheel drive EQS 450+ set for the UK offers an official 478 miles of range from a 107.8 kWh battery. It can be rapidly recharged in 30 minutes, in five hours using an optional 22kW on-board charger or ten hours with the standard 11kW version. A more powerful EQS 580 4MATIC all-wheel drive version offers 523hp, but is not currently planned for UK release.

Beyond trumping the latest Tesla Model S by at least 60 miles, the EQS's other headline feature is its 55.5in curved interior 'Hyperscreen', featuring three screens under one glass cover and, somewhat controversially, no physical buttons at all. Gorden Wagener, Daimler chief design officer, thinks it's the right time to make the fully-digital jump. "With the EQ brand, we want to define progressive luxury, stuff that has never been done before," he told Business Car. "And once you operate the car from the screen, you won't miss the buttons much." The screen's main point of reference is its so-called 'zero layer' and is Mercedes' answer to multiple, deep and distracting sub-layers. Vera Schmidt, VP for advanced digital design, qualified how the system works while trying to allay the fears of those attached to the idea of 3D knobs and switches: "There are still some elements of the EQS that are haptic like the air vents," she explained, "but because we created this 'zero layer', the user doesn't have to interact with the screen so much. It's a very intelligent surface. You don't need to use sub-menus or flick left, right, up or down so often."

"We paid attention to the main uses of a screen, navigation first of all, then phone, entertainment and so on," Wagener continued. "We created that canvas and then created pop-up notifications, from predictions to incoming calls, so you can operate everything on one layer." The Hyperscreen also promises better haptic feedback, a real problem of many current car touchscreens, via 12 actuators under the Hyperscreen's surface, which trigger a vibration in the cover plate to acknowledge the finger's touch. Mercedes has also confirmed that Apple Car Play and Android Auto will work within the Hyperscreen "presented in a generous window above the Home and Climate Bar". And if the idea of a buttonless dash feels like a leap too far, Mercedes will also offer a more regular S-Class-style system in the EQS. Despite the hype, the Hyperscreen is only an option, suggesting that Mercedes pulled back from making 'fully-digital' the only screen solution. Regardless, Wagener is keen for the Hyperscreen to be one of those trickle-down techs in time. "The Hyperscreen will cost more money and you will see it first in the EQ brand, but like every invention we will spread it across the entire line-up in a matter of years."

Prices for the EQS limousine - due on sale in late summer 2021 in the UK, with deliveries by the end of the year - are yet to be confirmed, but don't expect much change from £100,000, even if they might notionally start nearer £80,000. Among its other tech, EQS is claimed to be "the most aerodynamic production car in the world" with a laudably low 0.20 Cd figure, and will also showcase 'over the air' (OTA) software updates and rear-axle steering -  adding some useful turning agility to the 5.2-metre long limousine. Level three 'eyes-off' autonomous driving up to 37mph is promised where laws allow, but that's currently only in Germany. And finally, artificial intelligence will also play an increasingly important role, as Schmidt concludes: "We created a module, which after a couple of drives knows where your work and home is, so it doesn't take long to learn your behaviour. In the future, the AI will surprise you in other ways too. It has a lot of room for development. This is just the start."