Subscription is either a trendy flash in the pan or a highly convenient way of sourcing vehicles, depending on your standpoint. Jack Carfrae asks where it fits in the fleet sector. 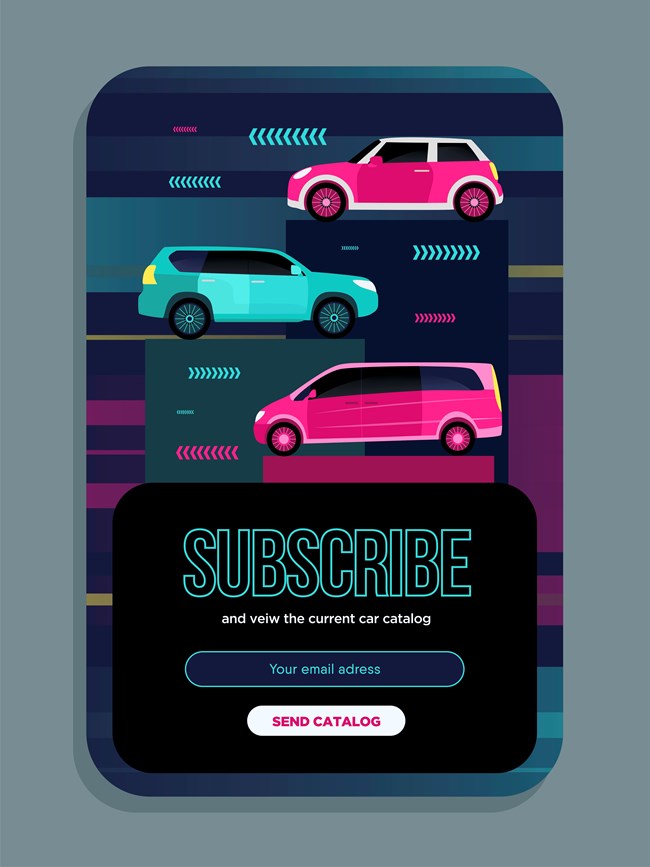 Pick your favourite streaming service - Netflix, Amazon Prime, Disney Plus - pop the name in front of 'for cars' and it more or less sums up the subscription model.

With the caveat that every company is different, it usually involves a minimum of a month's commitment, either no down payment or a small one, SMR cover and optional insurance. It is generally cheaper than daily rental but more expensive than leasing, occupying a middle ground between the two.

Several manufacturers have launched such services - Volvo and Jaguar Land Rover among them, while the Stellantis brands are on the cusp in the UK - and independent specialists are mushrooming.

The number of vehicles on subscription is minimal at present - one provider told us it was definitely no more than 25,000 - but it is tipped for serious growth. Frost and Sullivan reckons it could reach a market share of close to 10% in the US and Europe by 2025/6 - the figure, if not the year, is broadly echoed by those who peddle it - and comparisons have been made with PCP and PCH - now the country's dominant forms of personal car finance, which once played second fiddle to outright purchase.

However, it seems to have an image problem in the fleet sector, because it is considered 'a consumer thing' by many. That is what the AFP told Business Car when asked if any members had dabbled in it. "We don't know anyone who is using it and fleets use rental in those circumstances", was the response.

Subscription companies freely admit it is the beginning to many conversations with business customers, but the clearest distinction from rental is that, with subscription, you know what you are getting.

"The main difference is, when you rent a car, you usually rent by group," explains Duncan Chumley, CEO of Mycardirect, which operates both rental and subscription services, "it's group A, B, C or D; you don't really know what it is - it's just a rental car.

"With subscription, it is exactly the same as if you were buying your new car. you know the reg, the chassis number, you know the colour, you are speccing the car to what you want and you choose the model that you want. That's probably the major difference and the reason why people choose subscription."

The other is its position as a bridge between short and long-term funding methods, which, according to providers, works rather well for businesses straddling prolonged daily hire charges or the baggage of a three-year lease.

"We're seeing business-critical fleets, like those with vans, increasing, but they aren't necessarily wanting to take a long-term risk on those vehicles," says Toby Kernon, CEO of Wagonex, which has its own subscription service and produces white-label platforms for others, "they may just be for three/six/nine-month projects - and the certainty surrounding contracts is not necessarily there at the moment, because of the pandemic."

Some companies offer vehicles for as little as a month, while others have longer minimum commitments. Volvo - which, incidentally, wants 50% of its registrations to be through subscription by 2025 - works on a three-monthly basis.

"Volvo has a three-month minimum/three-month break, so [the full contract] actually gets you to six months straight away, which fits the sale and buyback agreements you get with dealerships," adds Kernon, who describes it as an ideal period for subscription, because the business model stacks up and the end-user gets a decent rate.

"It gives the consumer a good price and it makes sure the dealer can make money. After six months, those cars are either sold into the used car market through auction or sold on the forecourt."

Fellow subscription specialist Caasta, an offshoot of leasing broker Green Bison, agrees with Kernon that the appeal, for the B2B market at least, often lies in the lack of anything especially long-term. CEO and co-founder, Michael Minahan, describes why it suits two of the firm's business customers: "One is a housing association and they go through peaks and troughs. They could recruit, say, 50 people to convert houses, which might take six months - and they need vehicles.

"Most of the time, they are taking vehicles out on a daily rental, which is costing them an arm and a leg. A couple of times they've taken them out on three-year leases and said, 'there's always a gap in between, so we'll just keep them in our car park'. But, they've had vehicles just sitting in their car park for six or seven months, not being used.

"The other client we've got sells sports gear, like squash rackets. If they launch a new product, they will bring in six or seven salespeople for nine months, they will do a big-bang approach and then it will settle."

Caasta offers vehicles on 12-month contracts and has a limited number of models, but claims its approach keeps costs lower than rental.

"We have a list of nine vehicles, they are all ULEVs and we stick to them," adds Minahan. "You can't be all things to all men, because you can't do the pricing."

Chumley concedes that subscription is costlier than leasing, while his company also supplies higher-end cars, such as Teslas, Range Rovers and Porsches, among other, broader brands.

"It is slightly more expensive [than contract hire] and I wouldn't deny that," he says, "you do pay a little bit more - maybe £20 a month. than if you leased that vehicle over a longer period of time. If you want the lowest possible cost, you can look on many broker sites and come up with some incredibly cheap deals, where you are putting £5/6,000 down for nine months in advance and you get a headline rental.

"When you start then putting it back to where we are, which is one month in advance, no initial deposit that isn't refundable and the maintenance, tyres all included, then it becomes much more comparable."

Cash allowance is another area in which subscription is gaining ground. Its bundled, fixed-price nature has reeled in drivers who know exactly how much they have to spend each month, as Chumley explains.

"At the moment, I would say [subscription is popular] with smaller fleets. Not necessarily smaller-sized companies, because I've just put a GLE in to the director of a property company in London with a value of £48m - they just didn't have any cars on their fleet, but they had a car allowance. And I've actually just done another one to a boat company in Southampton that, again, just had a car allowance."

Others are keen on the non-committal aspect amid a time of shaky job security. "A lot of customers I've spoken to actually like that, because they don't know where their company will be in 12 months' time," adds Chumley. "Cash allowance is great as long as you're working [but] if they [drivers] have a cash allowance of £500 a month, they lock themselves into a four-year contract and, in a year's time, they find themselves made redundant, then it can put them into a financial struggle."

That same ability to walk away from contracts also presents an opportunity to experiment with plug-in vehicles. Every subscription company to which Business Car spoke to for this article claimed its service also acted as a try-before-you-buy litmus test for EVs. If what some operators have recently told us about the availability of electric fleet demos is true (spoiler - they are few and far between; see our interview with Centrica's Steve Winter on page 21-23 for more), then subscription could serve as a kind of extended plug-in demonstration programme - albeit a paid one.

Almost everybody to whom we spoke to also mentioned the online car giant Cazoo, which announced its impending purchase of Drover - one of the longest-running and most established car subscription companies, founded in 2015 - in December 2020. It also bought Germany's Cluno, which is among Europe's largest vehicle subscription providers, in February this year. Cazoo has form when it comes to raising capital and is allegedly lining up a hefty marketing campaign to put eyes on car subscription and get it more of a foothold in the UK.

If that is successful, then the subscription's profile is in for a serious uplift, and fellow providers are certainly not complaining. Even those fleets that consider it 'a consumer thing' may start to think twice when the model is better established, not least because there is clearly a market for medium-term business vehicles.

Europcar Mobility Group has introduced three subscription packages targeting businesses with a minimum rental period of one month, including an offer where subscribers can switch an electric vehicle to an alternative internal combustion engine car for two periods of two days each month. This could be attractive to people who are not yet convinced that an electric car or van will be the right mode of transport on longer trips.

José Blanco, group sales director, Europcar Mobility Group explains: "At the origins of our Group, was the vision of its founder Raoul-Louis Mattei: 'Why own a car, when you can rent one whenever you need it?' Today, this vision, which Europcar Mobility Group was founded upon, is more relevant than ever, especially for companies. We believe that the flexibility offered by subscription is a key to success and will be a 'must have' in the 'new normal'.

"Instead of a fixed-term lease, our new offers give businesses the opportunity to pick-up cars or vans when they need them, for as long as they want, in a fully flexible manner. And thanks to this, businesses have optimal control over their costs and can adapt quickly to new situations, increasing or downsizing their fleet based on their activity level."

According to Stuart Donnelly, senior director for group international sales at rental company Sixt - which also operates a subscription service - long-term rental has rocketed since the pandemic began.

"If you look at the way that our business has transitioned over the past 12 months, historically we were heavily dependent on short-term hire rental revenue," he tells Business Car.