The green conundrum - what role for hydrogen and autonomy?

Battery electric vehicles dominate the greener motoring debate - but how much might hydrogen fuel cells, and connected and autonomous vehicles, be able to contribute? 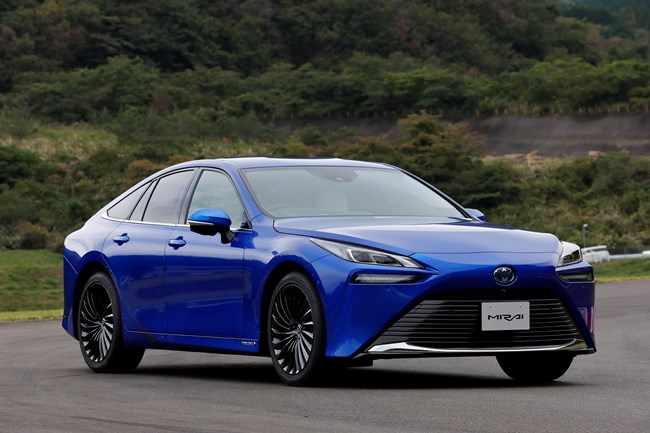 Hydrogen fuel cells are the 'ultimate' solution for environmentally-friendly cars, despite their extremely limited current uptake, it has been said.

Toyota GB's alternative fuel manager, Jon Hunt, claimed that the technology offered the most sustainable and flexible solution when compared with alternatives such as battery electric vehicles.

Hunt's comments came at an online conference held by the Westminster Energy, Environment and Transport Forum, staged to discuss the next steps for low emission vehicles - an event which covered a wide range of topics, also including the potential environmental benefits of connected and autonomous vehicles (CAVs).

Hunt said that because hydrogen vehicles did not need charging from a plug, and instead were fuelled with hydrogen from pumps in a similar manner to a petrol or diesel car, the batteries fitted to them could be 50 times smaller than those installed in battery electric cars, while offering comparable range.

He said this helped to mitigate difficulties associated with battery production, as well as issues with their deployment.

He said: "Because of the materials used, the need for energy on demand to charge, and the practical constraints of weight, durability and energy density, Toyota believes battery electric vehicles cannot provide the only global solution to passenger car needs and other transport requirements.

"Fuel cell [technology], which uses completely renewably produced hydrogen and emits only water, is considered the most sustainable and flexible solution, and whilst it may not be the most practical for every application, we do consider it to be the ultimate environmentally appropriate system for passenger cars."

Toyota does not currently offer any battery electric cars for sale in the UK, instead focusing mainly on hybrids, although is set to launch a new battery electric SUV this year, which is set to be the first of a number of models based on a new electric platform.

It launched the hydrogen-powered Mirai in 2014, but with a purchase price of over £60,000 this was an extremely-niche product, with fewer than 200 making it onto UK roads.

However, Hunt said this was in line with Toyota's sales expectations, and the company is now introducing a second-generation Mirai (pictured) set to be around 20% cheaper - although drivers are still likely to face challenges associated with refuelling infrastructure, which is extremely limited.

Despite the major challenges facing hydrogen, Hunt said it was important for the motor industry to pursue a range of powertrain options, rather than just betting on one horse.

He said: "It's an aim for us to use our knowledge and expertise to tailor a range of solutions to the different needs of customers around the world, and our approach is the right technology, the right place, the right time.

"Not all approaches that we have seen are made in the same way, and I guess a perfect example is the diesel emissions scandal, where looking only at CO2 emissions, ignoring air quality concerns, and being pushed frankly by the diesel lobby as the only solution, not only caused more problems but brought about fraud, and I would counsel to say 'don't let this happen again'."

The discussion of CAVs during the event was led by Neil Fulton, chief operating officer of Connected Places Catapult, the UK government's innovation agency for the transport industry and autonomous vehicles.

He said that while the vehicles could offer major environmental benefits, their effectiveness was very dependent on how they were deployed.

He said: "CAVs will drive more efficiently than humans, and chances are they will be shared, but people may take much longer journeys, and may use these vehicles instead of trains or active travel, resulting in an increase in emissions."

He explained that scenario one would make little difference to carbon emissions, while scenario two would actually increase emissions, as more car journeys would be undertaken in cars likely to be made larger for increased comfort, making them less efficient to manufacture and use, while scenario three would create similar issues.

It was only scenario four, with its full automation and widespread sharing, which the research showed would reduce emissions, since while the number of miles travelled in cars would still increase, all other factors, including manufacturing, vehicle emissions and infrastructure, would show decreases.

Fulton therefore said actions would need to be taken to encourage shared usage of future autonomous vehicles, while direct road user charging - discouraging miles being covered by empty vehicles - should also be considered, as should greater interoperability with public transport.

He said: "This is a finely balanced situation. It could perhaps go either way, and it could just need a push to go towards the better outcome for the environment."