Nissan forges own path to electrification 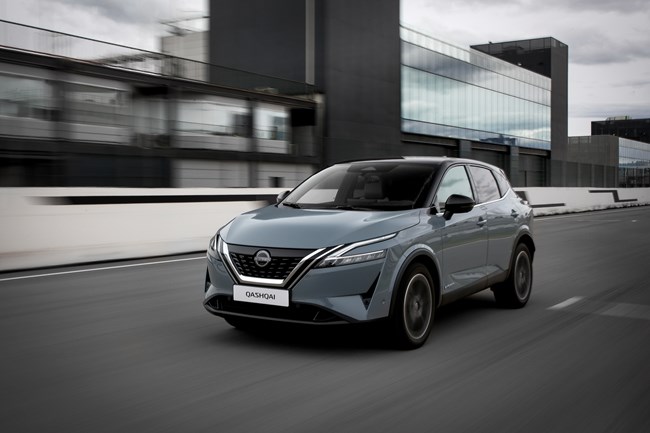 The E-Power system will arrive in Europe installed in the Qashqai and X-Trail SUVs, and will sit in Nissan's range alongside the manufacturer's new flagship EV, the Ariya.

Nissan has said it will not launch any new pure petrol or diesel-powered cars in Europe from next year, and plans for 75% of its sales in the region to be electrified by 2026, with an ambition for this to be 100% by the end of the decade.

First introduced on Japanese market Nissans in 2017, the E-Power system differs from traditional hybrid powertrains, as where they use a petrol or diesel engine and an electric motor to power the wheels together, in the E-Power system the petrol engine does not directly drive the car at all. Instead, it is used to generate power for a battery and an electric motor, which then sends pure electric drive to the wheels.

According to Nissan, advantages of this system are that the petrol engine is able to remain within its optimal rev range, improving efficiency, while the car also benefits from the driving manners of a pure EV, such as an immediate response to presses of the accelerator, and the availability of Nissan's E-Pedal Step one-pedal driving system as seen with its Leaf EV.

Power is also recovered under deceleration and braking for redeployment in the manner of other hybrids.

Although the engine is not directly connected to the wheels, Nissan says a 'linear tune' system increases its revs when the car accelerates, to avoid a 'disconnected' feeling to the powertrain.

As deployed in the Qashqai, Nissan is quoting a provisional CO2 figure of 119g/km. If confirmed, that would compare well against conventional hybrid systems offered in rival SUVs from other manufacturers, although it would be some way off the figures achieved by plug-in hybrids. Nissan has said it will not be offering the latter, citing fears over drivers' willingness to plug them in.

Discussing the E-Power system at a Nissan event, the company's European vice president for powertrain engineering Matthew Wright said: "We are really proud of this technology, and really happy to bring it to Europe. It was launched in Japan and was successful there, but we had to make a lot of modifications to bring it to Europe.

"Really what has driven this is that Leaf EV driving feeling. We know that customers like that and we really wanted to reproduce that with this technology, with the instant, uninterrupted acceleration."

We were given the chance to sample prototype versions of both the Qashqai E-Power and the Ariya at the Jarama racing circuit in Spain, and while our brief test drives in such conditions would of course be no basis for full reviews of the vehicles, it was possible to gain some initial impressions.

From behind the wheel of the Qashqai E-Power, we were pleasantly surprised that the car spent a fair amount of time driving with the engine off and purely relying on electric power from the battery. When the engine was engaged it was mostly very quiet, sometimes even unnoticeably so, only really making itself heard under heavy acceleration.

The 'linear tune' system designed to match acceleration to the engine note also seemed largely effective, although it was still a slightly unusual sensation to have instant EV-style acceleration coming in just ahead of the associated increase in revs.

As for the Ariya, it delivered impressive acceleration despite our test car featuring the entry-level 217hp front-wheel drive powertrain (242hp front-wheel drive and 306hp and 394hp all-wheel drive versions will also be available). It was also very quiet, without the whining sound associated with some other EVs - an improvement Nissan said its engineers had made since the development of the Leaf. We were also impressed at a glance by the model's interior - open footwells due to no need for a transmission tunnel front or rear help deliver a spacious feel.

Look out for full reviews of both the Qashqai E-Power and the Ariya from Business Car once the finished vehicles are made available to us later this year.