Workplace parking: Chevy to the levy

Workplace parking levies are back on the radar for several UK cities. Jack Carfrae explains what they are, where they might end up and why they are not the greatest earners. 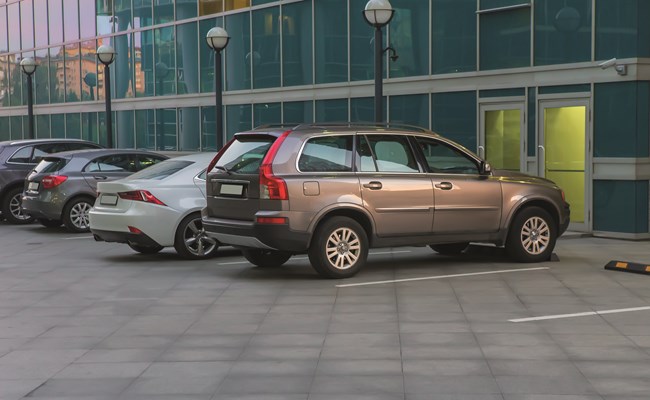 Everyone has coughed up to leave their vehicle somewhere, but the office car park is generally (emphasis on generally) considered a safe haven from fees. However, city centre car parks are potential cash cows for local authorities, as workplace parking levies find themselves back on the agenda.

For the uninitiated, a workplace parking levy (WPL) is a tax on a business located in an urban area with a car park above a certain size. It exists to curtail congestion and pollution, and as a deterrent to employees who eschew public transport in favour of driving their personal car to work. It is also a form of revenue for any local authority that chooses to implement it and is usually pretty unpopular with the businesses it affects. Think of it like a congestion charge or a clean air zone applied strictly to car parks, and you're about there.

Nottingham pioneered the concept when it launched the UK's first - and still its only - WPL in 2012. It currently applies to companies located within Nottingham City Council's jurisdiction with 11 or more parking spaces used by employees, regular business visitors or pupils or students attending a course of education or training. Organisations to which it applies currently pay £458 per applicable space per year. It is down to those organisations as to whether they foot the bill or pass some or all of it onto employees. A BBC article published on 4 March claimed eight out of 10 companies passed on the cost to employees; Nottingham City Council denied this when asked by Business Car, but it did not say how many companies did or did not make staff pay the fee.

The council claims to have poured funds raised by the WPL into a series of public transport initiatives, namely extensions to its tram system, which it says carries more than 17 million passengers a year, the redevelopment of Nottingham Station and running its Link bus network.

That sounds rather good from the local authority's perspective, but the scheme has not been without its setbacks. It faced vicious opposition from companies affected by its introduction and, shortly after its launch in 2012, a spokesperson for the council admitted to Business Car that "the business community has always been opposed to the levy".

At the same time, employees at Imperial Tobacco - then a large employer in the city - staged industrial action at the company's decision to pass on the cost to staff. Our investigation at the time revealed that the GMB Union's account of the matter differed substantially to Imperial Tobacco's; the union claimed employees were obliged to swallow the entire annual cost - then £192 plus VAT - while the company said it would pass on £120 or soak up the cost itself if employees took part in a voluntary day of training relevant to the business or a did day's work for a registered charity.

Nottingham's WPL has now had a decade to bed in, and you can still hear grumbles from those affected (unions representing city council workers dubbed this year's 7.1% rise in the fee an "opportunistic money-grab", according to the Nottingham Post) but unpopularity is not its only issue, because the WPL has so far failed to meet its financial targets.

The council told Business Car that the scheme was expected to raise an average of £12-£14 million per year over a 23-year period - the time allocated to its NET Phase Two project to double the city's existing tram system, for which the WPL is providing funds. The scheme generated £7.8 million in its first year and was expected to build up from there.

According to Nottingham City Council's statements of accounts for the past five years, the WPL raked in a net income of between £8.834m in 2016-2017 and £10.038m in 2019-2020 so, while it was on the increase, it was still short of its initial target eight years in, and local press reports have suggested that the council expected more businesses to register parking spaces than those that actually did.

Net earnings fell to £8.337m in the city's draft accounts for 2020-21, which was due to lockdowns and home working when Covid hit. You could argue that the scheme has served its purpose if business parking spaces are waning and fewer people are driving to work, but even if that's the case, Nottingham's scheme has not been a runaway financial success. The council says the WPL has raked in more than £90m since its inception, but that's £30m below the lower end of its target (£12m per year on average) so far. Granted, no one saw the pandemic coming, but the proceeds were a way short before that.

The number of businesses paying the levy has also declined. Before the pandemic, 473 companies were paying the charge across 40,915 spaces. According to figures from February this year, verified by the council, that had fallen to 370 employers and 32,077 spaces. There were said to be around 43,000 eligible spaces when the scheme began.

The greater good of reducing traffic levels and pollution could certainly justify the scheme beyond its economic aspirations, but it does not appear to have achieved that, either. The aforementioned 4 March BBC article claimed Nottingham was "the only [city] in England to have seen a cut in road journey times during rush hour because of reduced congestion before the pandemic," but it was short-lived. When Business Car put this to the city council, it sent us the following response: "This was true for the period from July 2014 to July 2015 but is unlikely to be the case now, given that traffic levels went up nationally prior to the pandemic."

Several other UK cities were reportedly mulling WPLs around the time Nottingham introduced its own - London, Birmingham, Bristol, Liverpool and Oxford among them. Some, such as Bristol, publicly announced that they'd ditched the idea, while none of the others came to fruition, and you have to wonder if Nottingham's results contributed to that.

Nonetheless, WPLs are back on the menu elsewhere. Leicester closed a 12-week public consultation on the prospect of its own scheme 13 March. If successful, it would see businesses with more than 10 parking spots charged £550 per space per year, from which the city thinks it could earn "around £95 million over the first 10 years".

The Scottish Government drew up plans to permit WPLs across the country in 2019, and the accompanying legislation kicked in on 4 March this year. As with England, any schemes that arise would be set up and administered by local authorities, and certain organisations, such as NHS properties and doctors' surgeries, are exempt, but speculation has been rife about the possibility of WPLs mushrooming across the country.

Edinburgh and Glasgow are already said to be considering the schemes. Capital city authorities have suggested that any such initiative would not be implemented until after the local elections in May at the earliest, while Glasgow has predicted that it could rake in up to £30m if it goes ahead with a WPL scheme.

The Scottish cities' plans are just as mired in controversy as Nottingham's moves, and they've become a favoured duelling ground for politicians. According to a February article in The Scotsman, Labour councillors in Edinburgh had backed the introduction of a WPL, but omitted it from the party's manifesto for the local elections, and were accused of bowing to pressure from the wider party. Also in February, Scottish Conservative leader Douglas Ross promised that no Conservative-led council would implement such a scheme.

Outside of the party-political sphere, WPLs have been labelled a counter measure to electric car uptake. Quoted in an article in The Times on 21 March, Neil Greig, director of policy at the Institute of Advanced Motorists, described them as, "a short-sighted policy" and "a blunt instrument". He claimed that failing to exempt electric cars would deter drivers from switching to plug-in vehicles and suggested that the schemes penalised those who travelled by car due to lack of availability of public transport. He suggested an increase in park and ride schemes, lower bus fares and more trams as better ways to reduce personal car use.

Cities that go ahead with WPLs without exempting electric cars would arguably clash with the UK Electric Vehicle Infrastructure Strategy, which was announced by the Government on 25 March. Dubbed the "vision and action plan for electric vehicle charging infrastructure within the United Kingdom," it commits £1.6bn to the creation of 300,000 public charge points by 2030 and places new legal responsibilities on charging providers surrounding methods of payment and other factors.

The move was welcomed by the AFP, which is also campaigning for greater implementation of public charge points via its Kerbside Charging Group, which is shortly due to publish a national 'heat map' showing where demand for kerbside charging is concentrated. We will reserve judgement for the results, but if the hot spots happen to fall within current or proposed WPL catchment areas, local authorities could really do with considering a waiver for electric vehicles.