The days of just low and high-beam headlights are long gone. Rachel Boagey takes a look at the latest and best headlight technology on offer and how it is set to become even smarter in the future.

New headlight technologies bring promises of brighter light, greater reach down the road, and even the ability to spot pedestrians and animals long before they would be illuminated by conventional bulbs.

In the industry today, there are four major headlight configurations. We discuss the advantages and disadvantages of each of them.

Halogen lights still rule when it comes to volume as they are cheap to manufacture, plus they're very simple to replace on most vehicles.

A halogen bulb has a lifetime of around 1,000 hours under normal conditions and replacement costs are usually very low compared with the other types of headlights. However, halogen bulbs are becoming a less favoured option and it is obvious that a change is coming soon. The reason, says Andy Cutler, forecast editor at Glass's, is that more cars are moving onto either xenons and LED "which are much brighter and therefore safer as they give much more visibility at night. Those two alternatives are becoming more common, especially on higher-end products because they are more expensive."

Laser technology is the car headlight version of a cronut (croissant-doughnut in case you haven't already tried one). Manufacturers such as Audi and BMW are working hard to make laser headlights a reality for many future vehicles as they promise to be 1,000 times brighter than LED headlights, have a longer lifetime than anything else on the market and come in a far more compact form.

Laser diodes are particularly impressive due to their small size - one laser diode generates a tiny luminous flux on a few thousandths of a millimetre. The BMW i8 and the Audi R8 LMX were launched almost at the same time as the first series production vehicles with laser headlights and, in 2015, the new BMW 7 Series followed. As a result of this laser technology, the full beam of these vehicles have a range of up to 600m - double the distance of the current standard LED headlights.

LED lights are expensive; however, they produce a lot of light and, because they are so small, they can be used to make some very interesting shapes, and are therefore very good for the styling of vehicles. "The other useful thing is, because they can be manipulated into multiple sections, they can be built up so that one headlamp has a number of separate sections that all contribute to the light shining ahead," says Cutler. "They can then be used alongside camera technology to produce a very intelligent headlamp that can maintain a high beam yet not dazzle oncoming traffic." This works by the LED lights and camera working in tandem to identify where the oncoming vehicles are and shutting down sections of the headlight in micro-seconds so as to produce a black spot around the oncoming traffic and therefore not dazzle the drivers. 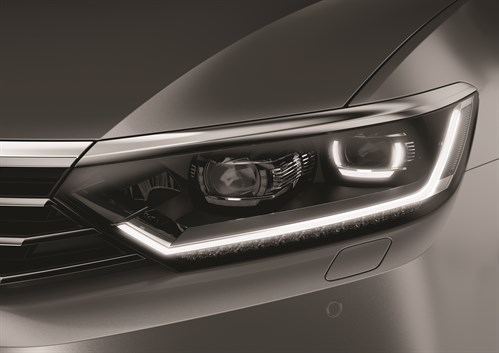 LEDs also require very little electricity to run, which is good news for modern cars, especially with the amount of electrically driven tech increasing all the time. They also should have a much longer lifespan and, in effect, should last the life of the vehicle; however, it is too soon to know if that will really be the case.

LED headlights are also becoming more common; however, they are not cheap and full LED, with adjustable beam technology, is dearer still and really only available on top-end products or mainly as very expensive options.

Also referred to as high-intensity discharge (or HID) headlights, xenons offer a crisp whitish-blue light that illuminates the road far ahead. They are probably the best when it comes to lighting up the sides of the road because they typically produce the most light. When you have driven a car with the latest generation of headlights such as xenon and then jump back into a car with standard halogen headlights, the difference is quite startling. "They light up so much more of the road and, in some cases, they use clever technology that adjusts the beam to fit with the conditions, road type and also to avoid glare to oncoming traffic, while still maintaining a high beam elsewhere," explains Cutler.

However, there is one downside to choosing these headlights and other similar ones - the cost of replacing damaged units. In some cases the cost to replace a xenon headlight can run into thousands of pounds.

So it looks like the future will bring an array of choices when it comes to headlights, and long gone are the days when halogen headlights were the only ones available on new cars.

Just like many technological advances on new cars though, cost is becoming the overiding issue.

"The full LED headlamps and laser headlamps that are available can cost a small fortune," says Cutler. "While these are currently rarer and are often only standard on more expensive premium vehicles, there is a growing trend for cars to have xenon or bi-xenon headlamps as standard, and they can cost around £1,000 in some cases to replace, and then there is the labour cost when it comes to fit them.

"This is not necessarily a headline issue at the moment as the majority of used cars do not currently have this technology fitted, but it will become more of a problem for the used car consumer as more enter the used market," Cutler explains. "It may discourage owners from maintaining their cars properly because of the costs involved to replace these expensive units and could lead to more cars being written off for minor front-end collisions, due to the costs involved in replacing a couple of headlamps and a front bumper."

There is no doubt that the latest innovation in headlight technology is a positive step to enhance safety and, as long as consumers are aware of the costs involved with replacement, there will be no unwelcome surprises in the future.

Clearly, these new headlight technologies can greatly enhance safety, but another positive factor is that the top-end bi-xenon or LED headlights will very often make a dramatic change to the appearance of the car, which can increase the residual value when compared with a model with standard headlights.

"In some instances, manufacturers have launched a new model with the LED daytime running light signature, across all trim levels, as the car can look so ordinary without it and they now realise that they can achieve an extra uplift in starting residual value that is set by the industry," Cutler explains.

Realistically, we all make our car-buying decisions in different ways. "Whether it be a brand-new car for company use or a used car that you will be sinking your own money into, some will look at how a car drives, others focus on reliability, but one of the very first decisions most people make is how the car looks," says Cutler. "If the car looks so much better because the manufacturer has put the LED lighting signature on the vehicle, then it is more likely to make a good initial impression."