Smart motorways were introduced to improve safety on our roads, but they have been surrounded by controversy ever since. What are the main rules your drivers will be expected to follow when travelling on a smart motorway, and how can their features be an advantage or disadvantage to your fleet? Rachel Boagey investigates. 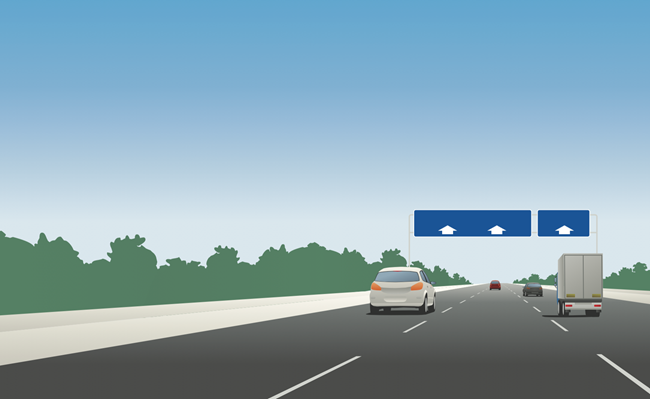 A smart motorway is a section of a motorway that uses traffic management methods to increase capacity and reduce congestion in particularly busy areas.

Smart motorways were first introduced in 2006 to ease congestion on certain parts of the motorway and smooth the flow of traffic, using the hard shoulder as a running lane and variable speed limits to control the flow
of traffic.

Highways England developed smart motorways to manage traffic in a way that minimises environmental impact, cost and construction time by avoiding the need to build additional lanes, and the government is investing £3 billion to upgrade existing motorways to smart motorways by 2020. More than 472 extra lane miles of capacity have already been added to the strategic road network through their implementation.

Data gathered since the first smart motorway opened to traffic on the M42 in 2006, has found that journey reliability has improved by 22%, while personal injury accidents have fallen by more than half thanks to better communication with drivers through variable signs displaying updates about the latest driving conditions, such as accidents.

So why, then, has there been so much controversy surrounding smart motorways since their conception? While they sound promising, the warnings that have been issued against them should not be ignored.

While the concept of smart motorways aims to deliver a positive impact for the public, motoring organisations have raised concerns around the safety of drivers and passengers. It is also thought that an increase in the number of smart motorways, which rely on advanced traffic management (ATM) cameras, could present fleets with a compliance problem.

Firstly, the removal of the hard shoulder means that there is nowhere to safely leave a vehicle in the case of a breakdown or emergency. In fact, smart motorways increase the number of times that drivers stop in live lanes, the third highest cause of accidents.

The RAC in its guide to smart motorways says: "In recent years, there has been a movement towards the permanent conversion of the hard shoulder into a running lane, which has concerned us."

Plus, according to a recent RAC study, 52% of those surveyed did not know about emergency refuge areas (ERAs), with the majority unclear about what to do after stopping or how to rejoin the motorway, so it would seem more needs to be done to educate drivers. 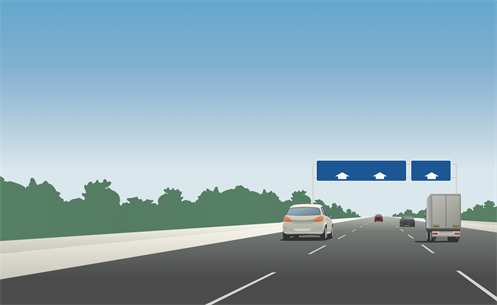 In a bid to combat this issue, the RAC has worked with Highways England to increase the number of ERAs, improve awareness of them by repainting them orange, and make sure that the latest technology is used to detect when a vehicle is in trouble.

Another issue that has come to light concerns red 'X' lanes, with RAC research suggesting that almost one quarter (23%) of drivers have driven in a lane on a smart motorway closed by the red 'X' sign in the past year. With hundreds of miles of smart motorways across England now using the hard shoulder as either a permanent or part-time running lane, it is a dangerous trend that is potentially putting lives at risk.

Simon Williams from the RAC says: "Red 'X' signs, which denote when lanes are closed, are paramount in safety terms as any stricken driver who has not managed to reach an SOS area is at tremendous risk of being involved in a collision with vehicles that ignore them. It is also extremely dangerous if road workers or emergency service staff are attending to incident in the road.

"Highway Code rule 258 is explicit; if red lights on the overhead signals flash above your lane and a red 'X' is showing, you must not go beyond the signal in that lane."

Highways England has been working since 2016 to improve compliance with red 'X' signs and has issued more than 160,000 warning letters to drivers who had either used sections of hard shoulder when they were not designated as a running lane or failed to comply with a red 'X'.

As it stands, there is manual enforcement of red 'X' signs; however, camera enforcement is expected to be brought in during the summer, although this has already been delayed previously. When new measures come in repeat offenders will likely receive points and a fine, or an option to do a motorway awareness course.

It is also vital that drivers are aware that these types of motorways operate variable speed limits, and that these can be helpful when it comes to managing the smoother flow of traffic.

Speed limits displayed inside a red circle on overhead signs are legally enforceable. If no signs are displayed, the national speed limit applies to these areas of the motorway. Drivers caught by the system face fines of up to £2,500, based on income, and up to six points on their licence. Speeds over 90mph could lead to automatic disqualification.

"Drivers could notch up sufficient penalty points for possible disqualification on just a single journey if they are not continually aware and do not observe motorway speed limits," explains Brown. "This increases the onus on fleet managers to check their licences on a more frequent basis. Annually is no longer sufficient."

"For high-mileage drivers, we would also advocate four checks per annum because they are a higher risk category of drivers. For company car drivers where driving is part of their job, we would generally recommend carrying out at least two checks a year and, for more casual users, once a year. Clearly, employers at all times should consider a risk-based approach to licence checking."

Brown also believes companies should not forget grey fleet drivers, especially as we are seeing a significant increase in the number of employees opting for cash allowances and using their own cars on company business due to increases in BIK taxation.

"Grey fleet drivers should be checked as regularly as if they were company drivers, including confirmation that they have the correct business class insurance, which is often overlooked," he adds.

With the nation's roads becoming ever more congested, only time will tell if smart motorways can manage the increased load, but it seems that, for the near future at least, they are here to stay and will continue to be the means by which the authorities regulate traffic flow.

"As a consequence, drivers will have to be more attentive and aware of speed limits at all times," says Brown. "Lapses in concentration could cost them their licence or increase their risk profile with their employer."

As for the future of smart motorways, Highways England recently said that intelligent roads will play an increasingly important role in keeping the country connected, and its recent 'Strategic Road Network Initial Report' will be used to inform the government's next road investment strategy, which begins in 2020.

In an ideal future, connected cars linked with smart motorways will enable an intelligent road network to improve how efficiently roads are maintained, while at the same time improving traffic safety.