From its 344-strong car fleet to building just under 40% of the UK mainline train fleet, Alstom is committed to embedding sustainability into every element of its organisation. 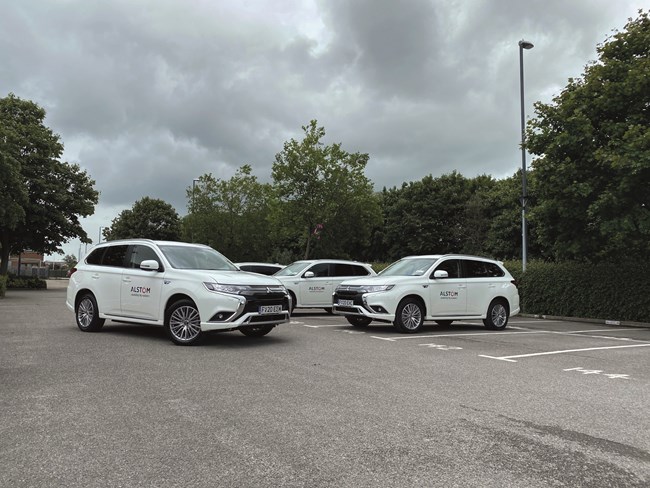 Alstom is the UK and Ireland's leading supplier of new trains, train services, and signalling equipment. In fact, the company is a world leader in delivering sustainable and smart mobility systems, and as well as building trains, trams and rail systems, its technologies enable transport networks to be the most effective and carbon efficient.

In addition to its rail cars, Alstom also runs a road car fleet, which is looked after by Nadim Mehar, Alstom's UK and Ireland fleet manager. Mehar previously worked in various roles at Leaseplan, including finance, operations and commercial, then moved on to manage the company's internal fleet. After leaving Leaseplan, Mehar made his first foray into the rail industry via a company called Signalling Solutions, a joint venture of Alstom that specialises in railway signalling and telecommunication engineering. Since 2014, Mehar has managed Alstom's fleet, which now consists of 344 vehicles - 80% of which are electric or hybrid, with an average CO2 across the fleet of 58.7g/km.

With the adoption of its 'Mobility by Nature' branding in 2019, Alstom has made clear its objective to advance transport solutions that focus on sustainable performance, decarbonisation and digitally enabled efficiency to help the world meet its climate objectives.

"As a leading global sustainable transport company, we are stepping up as a driving force in the decarbonisation of transport in the UK," Mehar tells us. "This means that for every vehicle we operate, we need to be focused on our overall impact and agenda to be as green as possible - and this extends to our car fleet; there's no point in our sales staff going to meetings or turning up to introduce a hydrogen train into the UK driving diesel cars - it's just not aligned with our vision," he says.

Mehar intends to grow the car fleet as well as the number of alternatively fuelled vehicles that it consists of. "I've been in talks with Toyota about getting some hydrogen Mirai's on to the fleet as we work on our hydrogen train. It just makes business sense," he says.

Although Mehar hoped for a larger percentage of the fleet to be carbon neutral by now, the impact of Covid-19 slowed down vehicle procurement - resulting in a new goal of 95% electric or hybrid by 2022.

He says: "Introducing these 'greener' cars to our drivers was a pretty easy task, so I expect that to be the case going forward too. It's great for the business producing a green policy but first, you need the buy-in of colleagues and staff to say 'yes, we're in'.'"

To do this, Mehar planned ahead and ensured that the drivers were familiar with the technology long before they introduced it on to the fleet. "I had open conversations with the manufacturers to get our drivers into their demonstrator cars and build their confidence around the new technology at the time," he explains.

Of course, the lower company car tax BIK rate compared with internal combustion engine cars was a selling point for the drivers too. "That incentive alongside ensuring drivers were familiar and comfortable with the electric technology made for a really easy transition. For them, it became a no-brainer and for the business as a whole, this was also true - we can lessen our CO2, future-proof ourselves, align our car fleet with our broader green business initiative, all the while helping the environment. It really was a win-win for everybody involved," says Mehar.

To further incentivise its drivers to make the move to electric cars, Alstom also agreed to pay for a charging point to be installed in the home of each employee. "For company car drivers, electric cars are great for their BIK, but it's only great for business if people are charging them," Mehar says.

Mehar is a big believer in 'knowledge is key' for his fleet drivers, hence the education and incentives he's carried out while introducing alternative fuels onto the fleet. "I work closely with my drivers and we figure out if an electric car can work for them with their home charger, and the support of public infrastructure and the increase of electric mileage, and if not, we look at a PHEV for the next couple of years and consider an electric car down the line. It's a consultation with my employees, as I don't want to force them to use an EV before they understand it better. Normally a lease renewal is done six months in advance - well we're doing it nine months in advance just so people can get into the demonstrator vehicles to see if they like them."

Mehar believes the reason his fleet is further ahead in terms of alternative fuel compared with other fleets is partly because of its open conversations and transparency with manufacturers. "It's a two-way street and we're working on hydrogen at the same time as them, so if we can assist them in any way then we will, and we will also welcome any feedback from them too. At the same time, I want to be number one if they have something new on the market. It helps us to improve our fleet and helps make decisions that will future-proof us as a green innovator," he explains.

Previous to Mitsubishi's departure from the UK market, Alstom had 72 Mitsubishi Outlander PHEVs on its fleet, which replaced its fleet of diesel vans. Now, Mehar and his team are looking into alternative vehicles to replace them that will offer similar benefits to the overall CO2 emissions of the fleet.

Another part of greenifying the Alstom fleet is via driver training, which in turn benefits driver safety. "One of the things we've introduced on to our fleet is licence checking. With this, we will be able to combine accident statistics with licence checks and see what data comes from that analysis," says Mehar. The fleet also employs telematics to monitor driver behaviour. "It's not about a big brother style camera, but figuring out how we can help our drivers operate these new vehicles in the safest and greenest way possible, and then enrol them on to the relevant courses," he says.

Being a rail business, Alstom already has a large health and safety department and, therefore, putting aside a budget to spend on driver training is already ingrained in the business. "This type of investment benefits us in the long run and when it comes to EVs, it's very beneficial to have our drivers know how to drive them safely and efficiently too - in fact, the slower the better really, for safety and for mileage range reasons," says Mehar.

Through open conversation and transparency through feedback, Mehar believes that this driver training and monitoring is benefiting the fleet in more ways than one.

He says: "We're engaging with manufacturer feedback on driving styles and sharing that with drivers as well - for example, drop the mph to 60mph and use the air con in the correct manner, and see how much more efficient your drive is and how much less you have to charge."

An electrified railway brings efficiency and carbon and air quality benefits, but there are many challenges to its continued rollout. Notably, like the road network, the majority of the railway network in the UK is not electrified.

Mehar believes that it is the responsibility of innovators like Alstom to push this electric future if the UK is to get anywhere close to its CO2 targets. The biggest goal Mehar has is to continue the reduction of CO2 in his fleet and the increase of EV adoption, while getting more involved with the company's European and global fleet to bring the UK's expertise to them. "We're working with some brands such as Mercedes, which have the right vehicles and the right technologies, so we're learning from them and sharing that best practice with the other markets that could benefit," he says.

In February 2021, Alstom completed the acquisition of Bombardier Transportation. Alstom sees the acquisition as a unique opportunity to strengthen its global position in the booming mobility market, enabling it to improve its global reach and its ability to respond to the increasing need for sustainable mobility.

The move will see the integration of both car fleets and requires a close partnership to figure out the former Bombardier's business driver requirements, and find them the right solution based on cost and sustainability.

With rail being the lowest CO2 emissive motorised mode of transportation, the combined company will work to focus more on an ambition to decarbonise mobility, Mehar explains. "With this acquisition, Alstom reaffirms its commitments to create a positive impact in the communities it operates, to provide employees with the best working environment and experience, and to be at the highest standards in terms of responsible business practices."

To onboard Bombardier's car fleet, Mehar also explains he is employing the same strategy of introducing its employees to green transport and encouraging them to adopt the mindset of accepting it, and being happy to use it in their daily lives too.

Moving forward, Mehar will continue with his strategy of future planning to ensure the fleet is offering the right cars at the right price for its drivers, to retain them and keep them satisfied with their work while making sure that at the same time the company is reaching its overall green mobility goals.

"Sustainability is at the heart of everything Alstom does," says Mehar. "We will continue to help people move in an environmentally friendly way with our electric trains, trams, metros and exciting new hydrogen trains, not to mention our car fleet, which will help to deliver products that will help make the world a greener place and play their part in delivery mobility by nature."

With the return to normality after Covid-19, Mehar suggests a return to train usage is inevitable, and  says the company in turn needs to continue its role as innovator in green transport, for its rail and car fleet alike.