Rachel Boagey speaks to Agnes Miller, BAM Construct UK fleet manager, about the challenges the fleet is facing and its mission to move towards electrified vehicles.

This year, BAM Construct is celebrating its 150th anniversary. Going back to its roots, the company was at the forefront of everything you could think of to do with construction: it had the earliest cranes, the most modern vehicles, and the newest techniques.

Today, the same remains true. BAM has been behind some of the UK's most recognised buildings including the Tate Gallery (1897), and the Park Lane Hotel (1927), and has also restored Windsor Castle and the London Underground after notorious fires, and the Old Bailey, too. Just recently it built the new Metropolitan Police HQ and more of Lords Cricket Ground, and uses virtual reality and drone pilots to help it build. 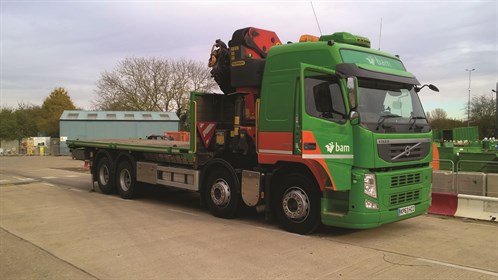 But unlike its fleet manager way back when, who used to run stables, and drive a horse and cart, Agnes Miller is responsible for running the company's modern fleet of cars, LCVs and HGVs. Miller, who began working for BAM in 1980 as an office junior, has seen the requirements of her role change considerably over the years.

However, since starting work for the fleet team in 1982, Miller explains that one constant has remained, and that is the support the fleet team provides to the business and its drivers.

"I may be biased but I wouldn't underestimate the benefits to both parties," she tells us.

The fleet has moved from outright purchase, and carrying out maintenance and bodywork repairs in-house with a large fleet team, to contract hire, and the number of cars on the fleet has actually reduced since the 1990s. At its peak, the fleet totalled more than 1,000, but nowadays it operates 220 cars and 120 commercial vehicles, including two HGVs, all driven by employees in various different departments of the business. There are also approximately 1,100 grey fleet drivers.

Despite the decrease in fleet size on the car side, the commercial vehicle fleet has increased, as has the management of the grey fleet and overall compliance, explains Miller. While the grey fleet number may sound pretty high, and Miller says the company is trying to entice drivers into company cars, she doesn't see it as a particular challenge.

"We carry out regular licence and vehicle checks, and work closely with the HR team to manage these drivers," she says. "Although we do realise 1,100 is a lot of drivers, and we would prefer to have more of a balance with company car drivers, so we are working hard on offering incentives to our drivers to make the switch."

What is more of an issue, explains Miller, are the challenges that the fleet industry has faced in the last 18 months.

"These challenges have been huge and we have wrestled with so many issues," she tells us. "WLTP is a big challenge, which has caused major delays in processing orders, as well as complete chaos with manufacturers and the current vehicle offering."

Miller explains that there has been a significant lack of direction and overall strategy with regards to BIK charges too, which she says has been extremely frustrating.

"The introduction of the optional remuneration arrangement seems 'left field' as this will in some cases increase the tax charge to the company car driver, despite choosing a 'greener' option - a hybrid, for example. I really don't understand the connection, the company car driver appears to be the 'easy target'."

Another challenge the fleet has faced is getting hold of the right vehicles and knowing what the regulations may require in a few years' time.

"The new vehicles have basically come to a standstill for us due to the delay processing orders, and manufacturers have even been suspending products because of CO2 regulations," Miller explains. "This is making it difficult for us to know what vehicles to order on our four-year cycle, as how do we know what the BIK tax might be on those vehicles in a few years' time?

"These external factors that we have no control of do make my job a bit more difficult, and I have to say we are basically in suspension mode when it comes to getting new vehicles on the fleet at the moment," she adds.

Regarding the fuel mix on the fleet, Miller says that many things have changed since the days of the 100% diesel fleet.

"We manage an electric Nissan e-NV200 van based at our Cranfield University project and this has been in place since August 2017, which has been extremely successful, mainly due to the fact it stays on campus and charging facilities are in place," she explains.

Miller says that there has been no 'range anxiety', due to the fact that the vehicle suits the needs of the BAM team.

But Miller is aware that the company does need to make a bigger dive into electrification if it wants to stay ahead.

"We are currently reviewing the introduction of electric cars to our schedule and we are keen to have an offering across the board as soon as possible," she says. "It is fair to say that we fully recognise that one size does not fit all anymore."

To address these changing needs, BAM has a multi-discipline team consisting of fleet, HR and finance representatives that reviews its fleet on a regular basis and looks at what vehicles are available in the market that may appeal to its employees. This also allows them to stay on top of those grey fleet drivers.

"We still have a list of vehicles which employees can choose from, so it is not a completely free choice, but this is a multi-badge policy and with a mix of specs and brands," says Miller. "We are always trying to keep a balance on meeting employee needs, environmentally friendly vehicles, new technologies, and of course balancing all of this with the commercial pressures, which are part of everyday business."

When asked what future challenges she sees facing her in her role as fleet manager, Miller says she sees only opportunity as the
fleet develops.

"I believe the major challenge on the horizon is electrification to ensure we 'get it right' for the business, our fleet drivers and the environment," she says.