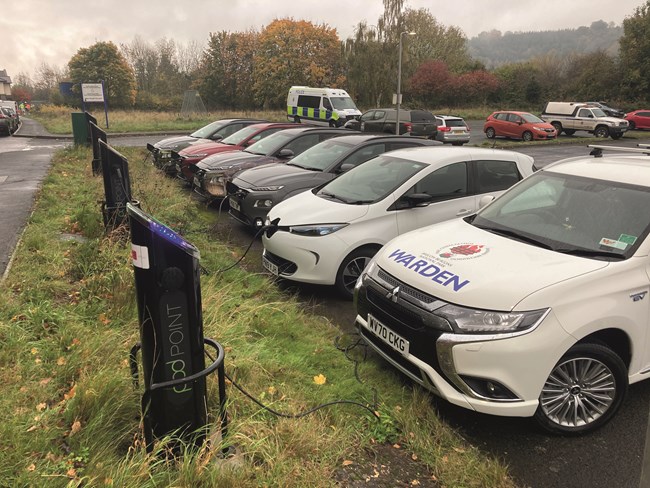 As a self-confessed car nut with a background in IT, Kevin Booker fell into fleet management at the Brecon Beacons National Park Authority very much by accident, but almost 19 years into the role and it's clear he found his calling.

"The person who used to be depot manager used to manage vehicles and used to buy them in an ad hoc way from local dealers. When he left I said I'm sure there's a better way we can do this."

Booker's first change when he became fleet manager was to procure all of the vehicles simultaneously in an effort to reduce the environmental strain the vehicles were putting on the Park and its surroundings by introducing a fleet of cleaner vehicles.

"I've continued with this method ever since and the result is I have expanded our pool fleet to get rid of the grey fleet, and I've also electrified the whole pool fleet. All of our vehicles are either plug-in hybrids (two 4WD vehicles) or full electric," he says.

The Brecon Beacons National Park was set up in 1957 and covers 519 square miles of uplands and mountainous terrain in South Wales. The Park is home to a wide variety of wildlife and the second-highest peak in Wales, Pen y Fan.

The environment is of high importance to the Authority and was the main push for its plans to go green. As early adopters of electric vehicles, the Brecon Beacons National Park Authority is so far down the road to electric vehicles that the 2030 ICE ban isn't even of the slightest concern.

This push towards electrification of the fleet is something Booker has been working on for years and has remained committed to, increasing the Authority's use of electric vehicles leading it to become one of only two Go Ultra organisations in Wales, and running the highest number of electric vehicles out of all UK National Parks.

In fact, his commitment to electric vehicles also extends into his personal life, achieving three Guinness World Records for the lowest energy consumption driving from John O'Groats to Land's End in a Ford Mustang Mach-E in July 2021. "Anything that pushes the EV word out, I'll be working on it," says Booker, who explains he is constantly trying to drive down CO2 emissions wherever possible, through vehicles and expanding the Park's electric charging network.

The fleet consists of 25 vehicles in total including cars and vans. It added its first electric pool vehicles in 2016 and now runs a fleet of electric and plug-in hybrid cars, including the Renault Zoe and Hyundai Kona EVs, which have replaced diesel vehicles. All have been selected on the basis of their range and efficiency.

By April of last year, the Authority had removed any non-plug-in vehicles from the fleet, however, a significant hurdle Booker's fleet has continued to face is with pick-up trucks, which make up a necessary percentage of the fleet for payload purposes within
the Authority.

All vehicles operate within the 520 square miles of the park with an average CO2 at virtually zero. "We have two Mitsubishi Outlanders that we keep fully charged and they replaced the pick-up trucks to save CO2, but with Mitsubishi leaving the UK, we're struggling on a replacement with those," he says. "There are no electric pick-up trucks currently in the market, which is a big problem for us, but while we wait for those, we're making strides to upgrade any other vehicle we possibly can."

The Authority made a policy decision that the Park was going zero emissions and drivers didn't have too much choice in the matter. Luckily, the switch to electric has been well received by drivers of the fleet, which include the Park Warden and planners, all of whom were trained on charging and driving electric vehicles before the Covid-19 outbreak. "In a way, drivers had no choice but to use the pool cars that were electric. Mostly all of the feedback we had from drivers was about how nice and simple they are to drive," he says.

This strategy has led to more than just positive feedback about the electric vehicles on the inside of the Park walls. Staff have actually started buying electric cars for personal use. "I think the switch was when we moved from the BMW i3s to the Hyundai Kona Electrics as they are also available as petrols. So it helped in people's minds that these were regular cars that just happened to be powered by electricity. It's a pretty normal car that looks normal, drives really well, and just happens to be electric and saves them money," he says.

The fleet also operates two full electric tractors, and is looking to electrify its quad bikes and ATVs. The fleet drivers don't tend to go heavily off-road in full-sized vehicles but will instead take lighter vehicles such as quad bikes or ATVs to do less damage to the environment. To lessen their impact even more so we're very keen to get them electrified. We've even gone down the route of electrifying our Park wardens' tools including chainsaws, all part of our effort to reduce our carbon footprint across the board."

Booker's extensive IT and electrification expertise has aided the National Park's deployment of a corporate charging network and over 50KW of Solar PV throughout park properties, including off grid with battery storage.

In 2019, the chargers captured enough power from the sun to drive an electric car 1,374 miles, from Lands End to John O'Groats, taking in every UK National Park on the way.

Booker's next mission is looking at installing rapid chargers into some of the Park's sites that are on strategic highways. "This involves working with the Welsh government because, as a small Authority with a limited budget, we rely on partnership working to improve the availability of rapid chargers around the Park. We're working closely with the Welsh government to make sure this happens."

The Park's infrastructure and chargers were built by park staff including Booker and over the years have seen various upgrades.

Booker explains: "For some of our sites we're waiting for the network operator to actually upgrade to 3 phase so we can put more chargers in as we've actually maxxed out the power supply with our cars. We were early adopters and things like Array charging didn't exist, but again we're public sector so can't just rip it out to upgrade it, we have to work around the limitations of what we have in the ground and try to upgrade it where we can and look at more technology improvements."

As a National Park, Booker explains his fleet has taken note of the climate emergency and recognises that it needs to be leading by example. "All of our electricity is sourced via renewable electricity providers and we have 10KW of solar in our depot and 24KW in our visitor centre," says Booker. "We only work with green energy suppliers - it's a corporate statute that we only buy green energy, we shouldn't be encouraging the use of fossil fuels."

As for next steps for Booker, he explains the fleet is looking into a salary sacrifice scheme. "The intention of this scheme is to green up our staff cars, the next step in making the Park as green as it possibly can be," says Booker.

His long-term goal is for the fleet to become completely zero emission by 2025, including its plant. "Our efforts to become more self-sufficient could see us meeting our aim of becoming energy positive by 2030, meaning we generate more energy than we use. Whatever it takes to make the fleet more green is what I'll be doing."