Centrica's head of fleet, Steve Winter, tells Jack Carfrae about his seven-year switch to electric vehicles, all while overseeing one of the country's largest fleets. 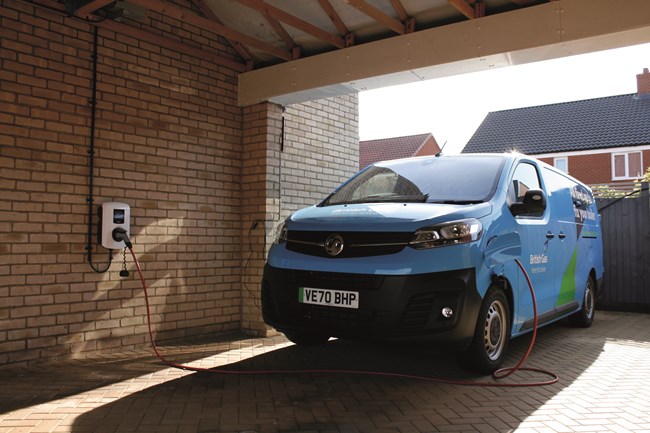 You could be forgiven for scratching your head at the sight of the British Gas vehicle on this pages when the company named in the headline has a different title. To square it off, Centrica is the group within which British Gas sits, but the latter has a colossal fleet.

Steve Winter - head of fleet, UK field operations - is the man responsible for it, along with any other vehicles on the group's books. He is also at the helm of the company's aggressive pursuit of EVs, which has been on the go since 2014 and is destined for completion in 2025. In February, group CEO Chris O'Shea pledged that the company's vehicles would all be electric by the middle of the decade, which, according to Winter, is "perfectly possible".

"We were really early," he tells Business Car, "it started when everybody said, 'that won't work; that's a fad', but we saw the writing on the wall.

"We've got seven years of experience of running EVs and we still haven't got all the answers. We still don't know everything, and we've had pitfalls. That's why I get a little bit frustrated with all these EV experts everywhere, because it is a voyage of discovery with electric vehicles."

It is not a surprise that Centrica's fleet is predominantly made up of vans, which total more than 9,000 sub-3.5t. However, the car fleet is certainly not insubstantial at approximately 1,500 company cars - more or less a straight split between perk drivers and essential users - and around 2,000 employees with a cash allowance, hence why Hitachi Capital is drafted in for a bit of help with fleet management.

Despite the sheer number of LCVs, Winter reckons they have, to a point, been more straightforward than cars when it comes to switching to electric.

"Cars are sometimes more difficult, I think, than vans," he says, specifically regarding supply, which has been easier for the former. "For vans, it's been OK, because the Vauxhall/PSA product suits the vast majority of our needs."

The company made what was then the UK's largest order of electric commercial vehicles when it signed for 1,000 Vauxhall Vivaro-E vans in July 2020. It topped that with an order of 2,000 in February, simultaneously slashing its previous 2030 electric-only target by five years.

Large vans are the only current fly in the ointment because, according to Winter, there is nothing yet at the heftier end of the LCV spectrum with a plug that suits the organisation's needs. As a result, it is sticking with diesel on short (for vans) three-to-four-year leases until the tech catches up and, crucially, the load bays match the size of the vehicles it currently uses. When that happens, the plan is to replace the diesels with electric equivalents and transfer the racking from the outgoing vans, to save buying it all again. 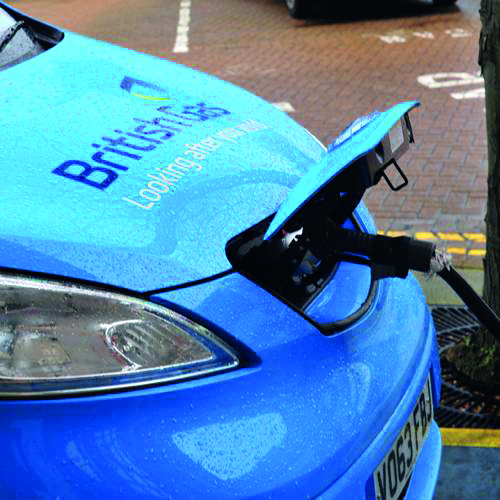 Clean air zones were one of the earlier motivations for adopting electric LCVs, even if they are not yet as prolific as they were originally billed to be, but a second initiative of canvassing drivers soon followed.

"The first driver for electric vans was the administrative burden of clean air zones, which was going to be an absolute nightmare," explains Winter. "So, we worked with our funders to say, 'we want to get out of Euro 5 as quick as we can' and we had a strategy that we wouldn't have any Euro 5 vans left at the end of this year - we'll only be in Euro 6 or EV."

"The second one was, for our first 1,000 EVs, we said [to van drivers] 'who wants to volunteer for an EV? You must have a driveway and we must install a charge point for you,' so our first 1,000 were with volunteers."

Uptake was clearly was not an issue, but Winter nonetheless set some simple criteria to determine whether or not drivers could feasibly take on plug-in LCVs.

"Effectively, all we did was check their telematics to see how many times they drove more than 100 miles a day in the past year, because that's about what we want that EV to do fully laden.

"We've got about 4,000 engineers that do less than 100 miles a day. For the ones that do more, it's probably because they're driving to a training centre - and we can deal with that, because they just have to get their accreditations updated once every three years. We'll do that with a [diesel] rental, so it's not an issue."

Cars are a different beast and, although Centrica has fewer of them, more than a little creativity is required to coax a four-figure strong mix of company car, job-need and grey fleet drivers across to a different form of propulsion. The easy bit, according to Winter, was the tax incentive, which sells itself, but he gave it a shot in the arm by relaunching the group's car scheme as plug-in only on 1 February 2021, completely striking petrol, diesel and self-charging hybrids from the list.

"It's gone down really well," he explains, "there are lots of Teams calls with senior managers asking what's on the list, 'is the EQC there? Is the Mach E there?' and they're all asking about full EVs - not plug-in hybrids."

He also broadened the choice list - previously limited to five brands - to rope in as many plug-in models as possible, chiefly because of the change in policy, but also with one eye on supply and lead times, which "have been a bit of an issue".

"When you talk to OEMs, they're gushing about this new model and that new model, they're saying there are loads of them coming - but I'm not seeing loads of them.

"The demo programmes are starting to open up, but for short periods of time. That makes me think there aren't many around, because everybody wants them. Gone are the two-week demos; you've got it Monday and you've got to give it back Wednesday - and where do you think I'm going to go in two days when all I can do is go to Tesco?"

Winter's initial plan for cars is to get all of the company vehicles transitioned to full EVs, via plug-in hybrids for those who have yet to go battery electric. He estimates that at least 500 employees are already driving plug-in hybrids and they have to have a home charge point if they order one.

Cash allowance and grey fleet are next on the agenda. The financial appeal of EVs under the current company car scheme is sufficient to tempt back a number of those who previously ticked the cash box. In fact, Winter says a number of drivers have already made the move. "There's a good choice of cars on there now, and we are now seeing some drivers actually coming back into the scheme."

At present, the company has a typical grey fleet policy dictating elements such as age and mileage, but there is no stipulation that employees have to use their allowance to buy a plug-in car. However, Centrica's fleet and HR departments have been chatting.

"We're talking about manipulating our AFR rates," says Winter, "say you're driving a petrol over three litres - we're not going to pay that rate; we're going to pay a lower rate. That's the sort of thing we're going to mess with to try to get those drivers into a low-carbon vehicle or push that agenda.

"Likewise, salary sacrifice is on the cards for us. So how do we mess around with the NI savings and, as a company, do we give some of those NI savings back to the driver? That's the type of thing that we're looking at. We haven't done it yet, but it's in our heads."

He also plans to position salary sacrifice as a way for drivers to obtain a second car for a family member. "It allows our drivers to get a car for their partners, sons and daughters, so that starts to work really well, because then you transition the family to low-carbon technology."

Part of the tie-up with Hitachi Capital includes access to fleet specialists for employees. Drivers can book consultations to help them establish whether or not a particular vehicle would suit them on and off the clock.

"They'll say 'right, what are you looking for? How many miles do you do and how many children have you got? Are you a golf player? Do you tow a caravan?' and try and help them to shortlist a number of cars. Then, we allow them three test drives," says Winter.

"It's really important that we put these people in the right car now, because we had drivers who, 18 months ago, were choosing the biggest car they could find and diesel was king. All of a sudden, the tax burden starts to hit, they are not doing as many miles and it's 'I can't afford my car' or 'I need to get out of it'.

"It was really key for us to make sure we have a good conversation with the drivers before they order a car to make sure they get the right one. I think that's a really important point nowadays." 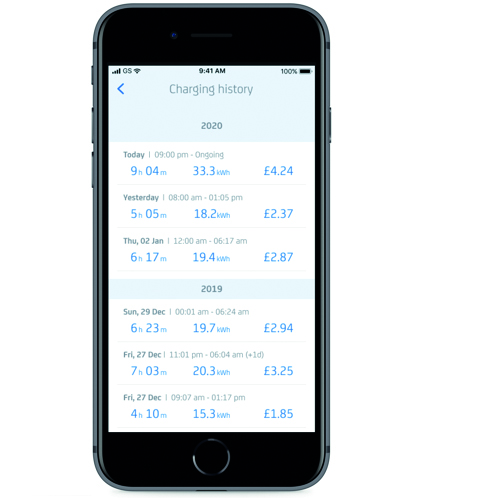 Centrica has also developed an app to communicate between a driver's personal charge point and its payroll department. The idea is to establish how much employees are shelling out for electricity used to power their vehicles and reimburse them accordingly.

"[The app] enables the driver to control his charge point," says Winter, "it talks to the vehicle and it talks to our payroll. We know what they are paying for a kilowatt of electricity, how many kilowatts they've put in, and then we reimburse them straight into payroll. We can say to an engineer, 'you don't need to worry about [the cost of] electricity because this is the process'."

For van drivers without home charge points, the company has apps to point them in the direction of their nearest public one, along with a swipe card to handle the billing, which Winter says works with a number of providers.

"The good thing about it is that drivers are quite happy to jump on a charge point during their break," he adds, "the heater works, the radio works, it keeps them warm. In a diesel van, they had to find a lay-by, they might have had the engine running - and that's a big no-no. Loads of complaints from the local community.

"When you ask an EV driver 'what's the best thing about your van?' they say 'I can pre-heat it' or 'it's an automatic, I don't have to change gear and I don't feel as stressed as I used to when I get home from work. So, that's not been a difficult sell."