Chris Connors, head of facilities and fleet at Countryside Properties, tells Rachel Boagey what it's like to head up the fleet for the UK's leading mixed-tenure developer. 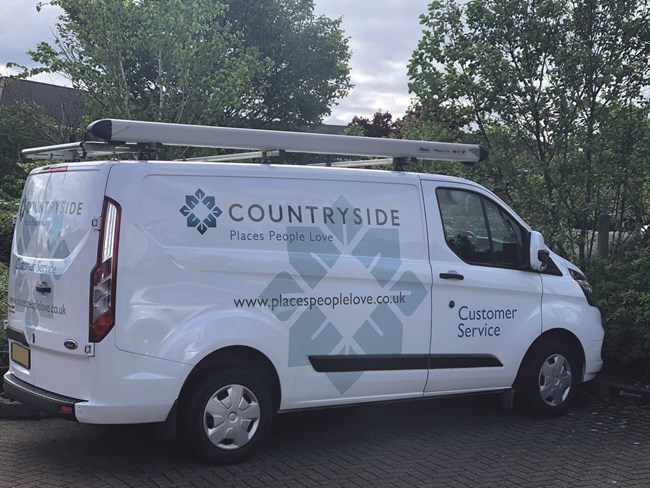 Countryside Properties has more than 60 years of experience in building homes. Its job is to build relationships between the public and private sector to increase housing supply in the UK.

But creating homes goes beyond just building houses. As well as a key tool to transport employees to site, Chris Connors, head of facilities and fleet at Countryside tells us the fleet is a vital means of retaining staff.

"As a housebuilder, recruitment and staff retention is a key challenge for us, particularly in the site-based roles where there is a big skills shortage," he says. "We need to ensure the car is an enabler, not a deterrent for people to join us or stay with us."

Staff retention is high up in the list of priorities for such a quickly growing company, which has expanded from three offices to a whopping 15 and around 600 employees to over 2,000. The fleet has naturally grown too, currently consisting of 530 company cars, around 900 grey fleet cars, and 60-70 vans.

"In construction there is just not enough skilled labour so we use the cars as a way to keep our drivers. To meet our targets in house builds we need to retain staff, it's that straightforward," Connors explains.

A few years ago, Countryside launched its new car policy which increased maintenance allowance, for example. "We no longer have recharges in the event of an accident, as long as the person reports it within 24 hours and cooperates with our accident management team and insurer and we don't include tyres or windscreens in the maintenance allowance, so they're always replaced free of charge," he says.

This is the main reason why the fleet has not made the switch to a fully company car-led fleet and still gives drivers a cash allowance to choose their own cars. "People come to an interview and ask what car they are getting before they ask about what pension they are getting or any other benefits. We need to make sure the car is an enabler, not a deterrent for people to join us or stay with us. That's why we really focus on offering a good choice of cars and trying to give employees the choice in what they get," says Connors.

But vehicle availability, or lack of, has resulted in many challenges for the Countryside fleet in getting the cars the drivers want delivered. "We went from being able to get a contract hire vehicle with relative certainty within three to four months and daily rental in four hours, to contract hire vehicles pushing a 12 month wait and an uncertainty if rentals are even available.

Connors says the fleet has had to adapt significantly and quickly to the lack of vehicle availability. "It's been a case of fortune telling which vehicle might fulfil the purpose for our fleet for the longest, we can't just make snap decisions anymore," he says.

"Often, we're directing people to the vehicles that might be available quicker than the ones they would ideally like, which continues to be a challenge, because company car drivers should be able to have the car they want. We find ourselves asking people to order a vehicle 12 months before it arrives and in this time, they might have life changes that mean the car they chose isn't the right fit anymore. What we've learnt as a fleet is to be flexible and able to adapt," Connors tells us.

The challenges brought on by the pandemic have, however, enabled the Countryside fleet to showcase its management skills during testing times. "We no longer automatically send a car back once its lease is up, we instead ask 'do we have a better use for that vehicle?', which we didn't necessarily do before. We have to think differently about our cars and have been challenged to think outside the box. Maybe the top vehicle choice of the driver is not available but something else is and they can make use of it instead.

"I'm grateful to work with brilliant people who have a solutions-driven approach that makes our fleet resilient to change. It is one of the reasons I love being in fleet - no two days are the same and there is always an opportunity to search for a solution and it's always rewarding when you do," he says.

As a result of the pandemic, Connors tells us that the mileage and patterns of the drivers has changed significantly, from predictable to unpredictable. "They're not doing the same number of commutes and we have adopted a smarter working policy, meaning their mileage has decreased, and so has their confidence in change. Most drivers are coming to the realisation that perhaps an electric car can suit their new routine and that the move to electric potentially isn't as scary as it sounds," says Connors.

Giving employees a wide choice of cars is not without its challenges, however. "We need to make sure we have the lease on the right terms, for the right time, and that we can reallocate the cars down the line if needed. And that leads on to encouraging people into the right cars."

The company's salary sacrifice scheme has increased in popularity in recent months due to EV incentives and low BIK tax and some discounts, which have allowed for drivers to get a really good car for their money. As part of this car policy, the fleet discounted electric vehicles by $100 a month and hybrids by $50 a month, "so we're not only trying to give our driver a choice but we're also trying to help them make a green choice," he explains.

Currently around 15% of cars in the company car scheme are electric but this is ramping up with orders meaning the fleet will soon be a third electric and 30% PHEV. When asked what his goal is for when the fleet will be 100% electric, Connors explains he hasn't put a badge on it, "but that's because it's happening organically. But we are encouraging anything that's more environmentally friendly.

"We're talking to our drivers if they order a combustion engine to see if we can help make a move to electric easier. If they have access to a charger we will suggest they consider electric, but at the end of the day, if they don't, they're not going to get the best use out of a PHEV or EV."

Connors drives an EV himself and a member of his team has an EV with a 100 mile range but the bulk of her journeys are far less than that. "As for the few people who haven't adapted so well to EVs, we will ensure we work with and support them. If we needed to reallocate a vehicle we would, but it hasn't come to that yet. The majority of our drivers are extremely satisfied," he says.

Over time, Connors expects the fleet to evolve towards electrification and away from combustion. "From my perspective as a fleet manager, I need to think about the future, and if the person who chose the combustion vehicle leaves the company during the life of the lease, I have a vehicle to reallocate. In reality, in two years time, it will be hard to do this because of the high tax and people wanting to do the right thing by choosing electric," he says.

Connors believes there will be a tipping point where Countryside offers only PHEVs or EVs to its drivers, "but that hasn't happened yet, because not everyone has access to chargers to make the best use of them", he tells us. "We want to make sure people are choosing electric for the right reasons and perhaps in two to three years, everyone will be driving an EV, but I cannot say that for certain."

For now, the focus is on driver training to set the drivers up for success when they do make the switch to electric. All of Countryside's drivers are required to complete a driver training course and risk assessment and the fleet has now introduced an e-learning course for those making the switch to electric. "The course talks drivers through the difference between having an EV and combustion, making sure they're not intimidated by the change," he says.

Connors' time is split evenly between fleet and facilities, so as well as encouraging drivers into alternatively-fuelled cars with discounts, he is also exploring the installation of charging facilities at its sites and offices. Its head office in Warley underwent a major renovation in the summer of 2021 and was fitted with energy and water-efficient systems.

"It's all about giving the right vehicle to the right person in the right circumstances," says Connors. "And if that means waiting until we have enough charging facilities, then so be it."

Connors sees opportunity in the changing fleet landscape and highlights the importance of his fleet being able to adapt to situations as they change. "What we're seeing is that people no longer want to commit to the same car for three years as their situation right now may not be the same in three years' time."

The solution may not be obvious or even known but Connors is ready to find it and believes flexibility is key moving forward in a changing marketplace. "Everything is evolving when it comes to working and driving behaviours and if drivers cannot get flexibility on the company car scheme, they are going to make their own choice elsewhere. There definitely needs to be a shift in approach in my opinion. We need flexibility to keep the company car relevant to the perk users. I am not so sure it will be six to 12 month leases as that is, effectively, a long-term rental approach, but we need to be less rigid. It's the only way to keep up with change and keep our drivers happy."