Rachel Boagey speaks with Dale Eynon about his fleet's commitment to having all zero emitting vehicles by 2027. 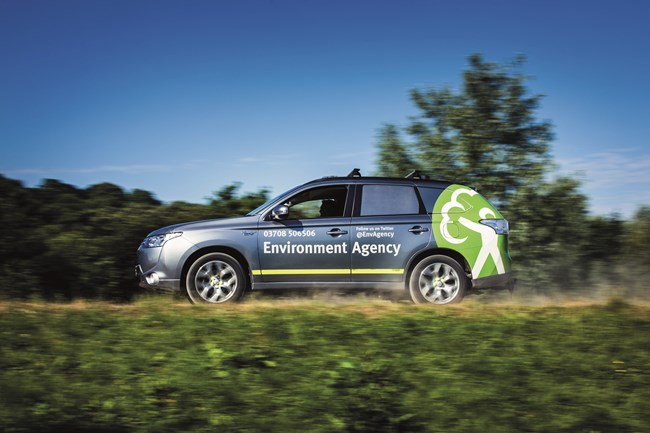 Although he did not necessarily plan for a career managing an environmentally-focused fleet, Dale Eynon always had an interest in the environment, graduating from the University of Nottingham with a degree in Applied Biology.

When an opportunity to get into the fleet industry arose in 2005, Eynon explains "I knew very little about fleet, I was offered the job based on my interest in delivering environmental savings."

From then until now, he explains that the industry, as well as his role managing the fleet service at the Department for Environment, Food and Current Affairs, also known as Defra, has seen quite the transformation.

Eynon's position has evolved into director, Defra Group Fleet Services at Environment Agency, where he explains his team provinces a corporate fleet service to 12 of Defra's Government departments, the biggest client being the Environment Agency in which Eynon's team is embedded, which makes up around 90% of the fleet.

Much of his 17 years at the EA has been spent learning on the job, although he explains this has been made easier through the support of a great team. He is responsible for the supply, service, maintenance and disposal of around 5,500 vehicle assets across the 12 organisations, Around 3800 of those are cars and the rest are commercial vehicles.

The fleet is responsible right from the acquisition of these vehicles through leasing, buying, management and disposal, but leases the cars with full servicing while the commercial vehicles are out right purchased with SMR via a servicing agent.

Without a doubt, the biggest challenge and change Eynon's fleet has seen in recent years is the climate emergency. "Responding to this requires us to make significant operational and business changes to reduce our carbon emissions and limit our impact on the environment."

To do this, he says collaboration has been key. "All carbon reduction plans need support from internal and external partners so we've been working with key suppliers, and external advisors such as the Energy Saving Trust, as well as the wider fleet industry harnessing the expertise they provide, meaning the Environment Agency has been able to both accelerate and increase its carbon reduction plans."

Over the years, Eynon has kept a continued focus on reducing the size and the carbon emissions of the fleet, but he explains that in the past three to four years, this focus has accelerated exponentially.

The Environment Agency's dedication to reducing emissions is underpinned by its mission to protect and improve the environment for people and wildlife. This mission is embodied by its commitment to be net carbon zero by 2030 and absolute zero by 2050, with the fleet being one of the focus pillars.

"We had a good CO2 rating already, but we are continuing every day to work on driving that down with a fleet strategy that aligns and is embedded across our business," he explains.

Working with the Energy Saving Trust on small, medium and large (up to 3.5 tonnes) two-wheel drive vans, up to 292 vans were identified that could be full electric with no change to their current journeys phased over two years.

This analysis pioneered by Energy Saving Trust, explains Eynon, was integrated into the organisation's annual replacement process. This means the Environment Agency will have the opportunity to change vehicles as new electric vehicles become available. In doing so, they will transition their van fleet to zero carbon technologies as fast as possible.

"The commitment originally was to reduce CO2 overall by 45% by 2030 when compared to the baseline of 2020, but for cars and vans it's much more ambitious," says Eynon. "Originally, the plan was for the entire car fleet to be electric by 2023, but this was pushed back a bit with issues of supply and we've had to radically reform the policy to decide how we deal with cars, which has taken time."

With this in mind, the new commitment is that by 2027, the entire vehicle fleet has to be fully electric, even over 1,000 4x4s on the fleet. "This is daunting as there's nothing on the marketplace to fit this gap in 4x4s, unless you go to a private converter which is expensive. We're working closely with manufacturers but the reality is, nothing is coming to the UK until next year at the earliest."

Charge point infrastructure is an important consideration when electrifying a fleet. The fleet has its own charging network of more than 200 charge points across its offices and depots, but Eynon says that is not enough when the whole fleet goes electric. The strategy is that within three years, the fleet will increase the network significantly to blend it in with the existing public charging network and home charging. "Those drivers who own a house don't find it too hard to switch over to electric but we need to cater to those who just don't have the ability to have a charge point fitted into their home, as they're currently reliant on the public and work charging network."

Eynon explains that his fleet is working on installing charge points in rural areas to make the journey less daunting for those who live and work more rurally than others. "We want to let the public use those as well so there's a bigger piece about sharing and ultimately sharing assets like charge points across companies and public networks. I believe this is the key to the successful future of electric mobility."

But the goal for now is to change the culture around electric cars. "Right now, drivers can't just rock up somewhere in their EV without planning their journey beforehand and charging at home or at work. We're now seeing new initiatives in the marketplace such as a move towards people borrowing someone's charge point in their village or town that's within a 10 minute walk of their property. They book it via an app, plug in any pay using the app too. This is a really positive move and part of the disruptive phase of charging that we're heading into now," he explains.

But in the emergence of this disruptive phase, Eynon explains that some people are getting left behind. "The whole industry is facing an interesting time at the moment and has never felt so much pressure in terms of people moving away from ICE to electric, but we've gone past early adopters now to a big chunk of drivers where it's a much harder battle to win their hearts and minds. Those early adopters are driving around in EVs  but many myths remain about limitations of electric vehicles when compared to petrol or diesel equivalents.

Due to this, Eynon believes it's vital for education on electric vehicles to ramp up too. "Teaching people how to drive electric and get the most out of them is something that we should continue to work on as an industry," he says. "This is especially true as EVs now meet the needs of most drivers, so the time to get comfortable with driving them is now. Some EVs offer up to a 300 mile range and most of our drivers will not even get close to doing that in a single day, and if they did they'd need to stop anyway."

In the car fleet, the goal is to implement an EV only policy by the end of this year. "We offer our drivers ULEVs only now, including PHEVs, so we will have to change that policy to meet these targets and figure out how to do so in a way that doesn't cost a crazy amount of money," says Eynon.

Currently, around 24% of Defra's car fleet is ULEV and over 300 of those are full EVs, and the intention is for this to ramp up electric massively over the next few years, says Eynon. But the other issue right now, aside from charge points, is vehicle availability - it's taking anywhere between six to 12 months for a new vehicle order to arrive.

Despite this, Eynon is still focusing all his efforts on the car fleet side to electric. "I don't personally believe in PHEVs as they carry a lot of weight lugging the engine and batteries around that they're not particularly efficient for usage long-term. As for hydrogen, Eynon explains that the network is lacking with a limited number of refilling stations and temperamental stations, however, he wants to encourage the use of this technology as the bigger the production, the cheaper the costs. Hydrogen would also address the weight limitations seen in the fleet's larger vehicles when it comes to electric. I believe hydrogen is the answer for these vehicles so there is clearly no single silver bullet when it comes to the future of transport."

Obvious issues aside, the Government wants to lead by example when it comes to electric and Eynon says it's his job to lead the Government thrust on this and ensure his fleet is pushing forwards and (literally) leading the charge.

When it comes to the cost of electrification of the fleet, Eynon is confident that the adoption will provide cost savings to the fleet and its drivers.

Eynon's focus is on reducing the size of the fleet, with recent changes to working practices as a result  of the Covid pandemic accelerating this process, as people are beginning to do more home working, as well as its carbon footprint. But a sharing economy is also in Eynon's periphery as reaching future CO2 reduction goals.

The fleet is working with Enterprise, Car Share, The Miles Consultancy, Mobilleo and Liftshare on the UK's first wide scale trial of shared mobility.

"Whether people are in the office for five days a week or one and use their car on the odd weekend or every weekend, we want to take their travel patterns and put them together into a holistic view to see if we can truly make shared mobility a reality," Eynon says. "We don't think everyone will need to have company cars anymore but instead select the mobility they need when they need it. By 2030, I want to see far more of a sharing economy and a more vibrant landscape that can make better use of technology to deliver freedom, flexibility but also environmental gains."