Rachel Boagey visits the Newbury branch of Dogs Trust to meet the charity's facilities manager, who explains why four wheels are almost as important as four legs.

A dog is for life, not just for Christmas. You may recognise this well-known trademark from bumper stickers, and like the trademark, the work carried out by dog welfare charity Dogs Trust requires endless persistence.

Although it doesn't bear thinking about, there are many reasons why dogs end up in rehoming centres. A change in circumstances, bereavement and divorce are just some of these reasons, and driving into the car park of the charity's Newbury rehoming centre to be greeted by a chorus of barks, it is evident just how many dogs are in need of loving homes.

Dogs Trust is the UK's largest dog welfare charity and cares for over 15,000 dogs each year, and this rehoming centre is just one of a total of 20 Dogs Trust centres dotted around the UK, with an additional one in Dublin.

You may recognise the charity's branding, not just from its TV marketing campaigns, multitude of events and 32 charity shops, but also from its yellow-liveried, four-wheeled, 275-strong fleet of cars and vans, which tirelessly drive up and down UK motorways carrying out various jobs that all contribute to one goal - trying to secure forever homes for their four-legged friends.

Newbury Dogs Trust has been there for more than 40 years, but has recently undergone a refurbishment programme, giving it lots more land and facilities for the dogs, such as sand and pond compounds. 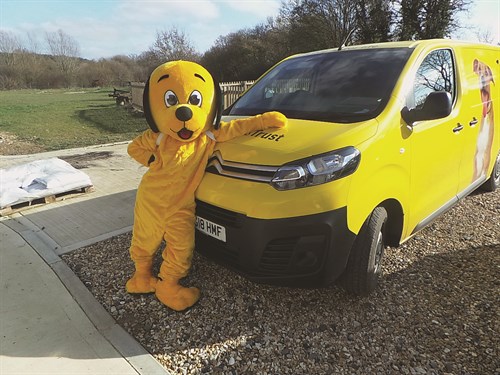 It is currently home to 45 dogs, which means it is running at full capacity, although facilities manager Stuart Holliday tells me the centre is pretty much always full. Holliday showed me around the facility, telling me all about the day-to-day running of the rehoming centres, as well as his job overseeing the buildings and the vehicles that tie the centres together as a charity with one shared goal.

Holliday explains it would be difficult for Dogs Trust to function efficiently without vehicles. The charity runs a fleet of cars and vans located nationwide - including at its London head office and 21 rehoming centres, as well as in the field - with most of them specially equipped to transport dogs. The increasing workload of Dogs Trust will see its fleet increase by a further 11 vehicles later this year.

"2018 was a strong year for Dogs Trust, with over 1,515 stray, abandoned, and relinquished dogs being cared for by our rehoming centre staff, and thousands more reaping the benefits of its preventative programmes aimed at stopping abandonment and relinquishment," Holliday says. 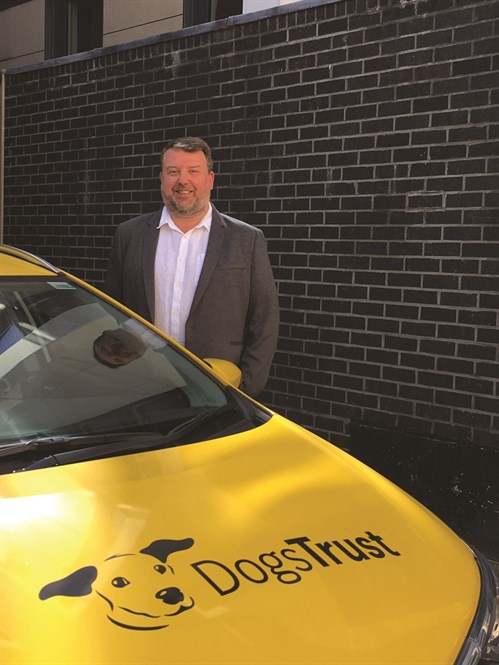 However, growth for the charity is bittersweet, meaning its work is increasing due to more and more dogs being in need of a home.

The charity purchases its fleet vehicles - Skoda Octavia estates and Citroën Dispatch vans - outright, with Venson Automotive Solutions handling the ordering, and providing fleet and accident management, and short-term hire cars. Driver licence checking and a comprehensive occupational road risk management service is in the process of being introduced.

Crucially, all vehicles must be bespoke to meet fit-for-purpose requirements. As a result they are delivered from dealers direct to Venson's own Equip for Service centre - the company's facility in Yorkshire that undertakes the fitting of specialist equipment to vehicles. For Dogs Trust this includes sign-writing, the addition of air conditioning, and the fitting of cages and lining to vehicles such as Dogs Trust's ambulance fleet.

"The cars can be used for anything and everything," Holliday tells me. "From moving staff members around the UK for training, to driving between our dog school locations with all of their equipment, or sending our educational officers out to schools and prisons to deliver their training sessions. The vans are often loaded to the gunnels with hoops, jumps, mats, treats, toys, you name it."

The cars can also be used for dog training, to familiarise the dogs with being moved around in a vehicle. 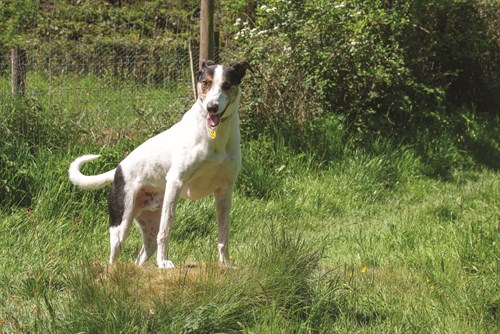 "Nine times out of 10 they need to get in a car to go home, so we try and ensure we familiarise themselves with this environment," Holliday says. He explains how Venson's fleet management expertise helps the charity.

"It is very difficult to manage the fleet within a tight budget, while continuing to ensure vehicles are fit-for-purpose and a quality service is delivered," he says. "However, Venson now has comprehensive knowledge of what we expect from our fleet."

Holliday explains the importance of ensuring that his fleet is not only managed effectively and efficiently within extremely tight budgets, but compliant with all legislation too.

"I am reliant on my account manager at Venson for bringing to my attention all the latest issues that impact on the fleet operation and our drivers, and together we can work to ensure best practice is followed," he explains. Holliday says that his role entails making sure the charity has the right vehicles in the right places doing the right things.

"They need to be looked after properly, look presentable, be well maintained, and most importantly, provide value for money for the charity," he tells me. "Vehicles are expensive, so we need to make sure we have what we need when we need it, as vehicles are an important factor that enable our staff to do what they do.

"It is so diverse and so amazing that I wouldn't want someone to say 'well, I couldn't do that because I didn't have the correct vehicle'." Another challenge for Holliday since joining Dogs Trust is the fleet's changing size.

"Over the last three years it has had to increase significantly as the organisation grows to meet the needs," he says. 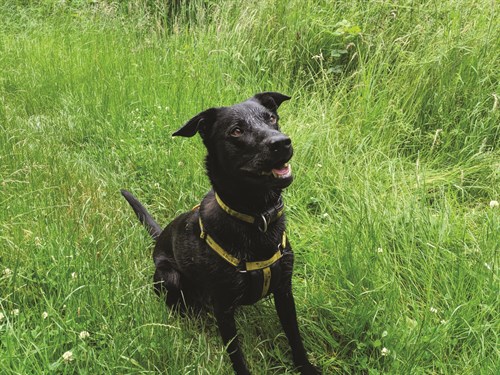 The charity is able to get some good deals from manufacturers to procure vehicles directly from them, but having to obtain more vehicles has meant that Holliday has begun wondering what vehicles are right for the fleet at this time and also going forward. The fleet primarily buys diesel, and Holliday explains that this is due to the amount of miles travelled by the fleet up and down the country.

"At the moment it is the most cost-effective way of travelling, but that is not to say going forward that it won't change as electric and other technologies become more prevalent," he says. "The last thing we would want right now is to run out of electricity on the A1 with a full van of dogs!" Of course, being a charity, cost is a big factor in the vehicles the fleet looks to procure.

"The cost of electric is quite high at the moment, but we expect that to go down in time as the technology becomes more available," Holliday says. "Then maybe it will be something we will consider."

The fleet has adopted some mild hybrids for its London operations already. "They are primarily used by our education team as they are more town and city-based, and we've found they have worked quite well."

Talking about the recently introduced ultra-low emissions zone in the centre of London as well as the congestion charge, Holliday explains that the charity tries its best to avoid having to pay those kinds of charges.

"We have some of our fleet based in our head office in London, so we made sure they are all Euro 6 compliant, moved some vehicles around, and replaced some vehicles with hybrids too. These are all steps we have taken to be as frugal as we can. We need to be reactive as a charity and ensure our fleet fits with our environmental beliefs, while keeping costs at the front of the considerations." 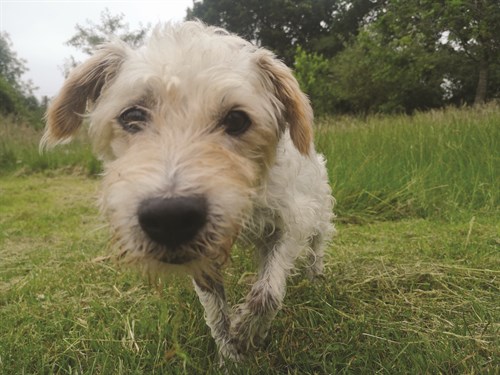 Last year was a challenging year for the charity, with WLTP uncertainty affecting the delivery times of its new vehicles, and Holliday and his team had to be as proactive as possible to try and obtain vehicles before the March deadline in order to mitigate that unknown factor, he says.

"What will happen at the end of this year will determine what happens for our fleet budget next year," Holliday explains. "We will have already budgeted for 2020 when Brexit happens, so we will just budget as we always do, and if anything changes in the meantime will decide whether we have to go and review it or whether it stays the same. It is all a bit uncertain right now really, but that is not just us, it is the whole industry.

Holliday explains that you have to be a keen negotiator when working for a charity, making sure you get value for every pound. "Everything that comes in to us is a donation and we don't have any government support," he says.

"I have to make sure the money coming in is used in the best way possible. At the end of the day, the fleet is the face of our brand on the road."

I was lucky enough to meet Harry, a 14-year-old Jack Russell, who didn't look a day over seven. Not a fan of his kennel, the reception staff in Newbury have decided to let him chill in the reception area at the centre, where he sleeps peacefully all day - unless there are sandwiches, when he turns into a ninja.

Although his role as fleet facilities manager might be challenging, Holliday explains the positives of his role at the charity.

"Being able to affect an organisation that works for such a valid cause and to be part of that is amazing, and although I am just a small cog in a very big wheel, it is a massive privilege to call this my job," he enthuses. Faced with the question of whether he expects the charity to continue to grow, Holliday explains he doesn't really know the answer.

"There are a lot of factors that will affect what will happen, and as I explained no one has any idea what Brexit will mean - but one thing that is always going to be the case is that dogs are going to need looking after," he says.