Sean Keywood finds out about the demands of running a charity fleet, and the benefits of hybrid company cars.

It might be easy to think of company car fleets as being split between private sector businesses and public sector outfits. However, this would overlook the thousands of vehicles on the roads of Britain that are being run by charities, and while the funding may be different, managing them well is arguably among the most important jobs in fleet - allowing their drivers to help disadvantaged members of society, while ensuring that money raised from kind-hearted members of the public is not wasted.

The Salvation Army is one such example. The church and charity offers support to vulnerable and marginalised people from more than 700 centres throughout the UK, has more than 380 charity shops and operates more than 6,500 clothing donation banks. To keep its operations going, it has a fleet of more than 900 vehicles, including nearly 800 cars, along with 78 minibuses, 51 commercial vehicles and 17 specialist catering vehicles. Clearly, running such a sizeable fleet is a major operation, but how does it differ from running a business fleet, if at all? To find out, Business Car visited the charity's Central London headquarters to speak to fleet operations manager Louise Haigh about the role.

She tells us that the majority of the Salvation Army's company car drivers are officers who use the vehicles for their work with the charity's clients, including older people, disabled people and people who are experiencing homelessness.

With this key role played by cars in the officers' work, it is clear they are job-need vehicles, but this doesn't mean drivers are given stringent restrictions about model choice.

"We have got a wide variety of cars," Haigh says. "There are about 12 or 13 different manufacturers, and about 115 different types of vehicles they can choose from in a fleet list.

"They are not offered sports cars, two or three-door vehicles, or four-wheel drive vehicles, but SUVs are fine.

"You do have people that require a larger car for their job. For instance, we have Salvation Army band members who need to carry larger instruments in their cars, so sometimes they need a larger car to accommodate that.

"We have people working in homelessness services that move people from the centre where they are staying onto their new accommodation - they might take belongings in boxes and a number of people, so they might need larger cars for that.

"Also, some have got larger families so need larger vehicles - we try to accommodate for the job and their personal circumstances as well."

While the drivers have plenty of choice, one policy that the Salvation Army has in place due to its charity status is a ban on premium brands.

Haigh says: "It is necessary to avoid ostentation like premium-branded vehicles to prevent supporters from believing their donations are being wasted.

"It is a matter of appearance rather than cost. We appreciate some premium vehicles can have very effective whole-life costs but try explaining that to the public at large."

As well as no premium cars, the charity has also banned diesel cars from being driven by officers - not initially because of concerns around 'dieselgate' and air quality restrictions, but because of reliability.

"Originally the fleet was all petrol, and because diesel became more economical, we turned to an all-diesel fleet," Haigh explains. "But then manufacturers started putting diesel particulate filters in the engines, and with that you needed to regenerate the vehicle by travelling for a certain amount of time at the same sort of speed.

"A lot of our drivers live remotely and couldn't get to regenerate the vehicle on a motorway or major A-road, therefore the engines weren't regenerating correctly, and then the cars were requiring servicing more frequently, and it was becoming very expensive."

The only occasional exception to the diesel ban is for drivers who cover more than 20,000 miles a year, which can apply to the charity's other category of drivers.

Haigh says: "We have got staff who do quite a bit of mileage for the organisation, such as people in property that travel quite a wide distance.

"Some cover Northern Ireland, Scotland, so it is a huge mileage range. They are mainly the people that take the diesels because of the large mileage they do." 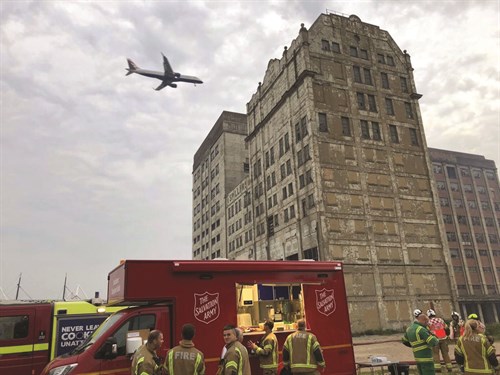 One choice that Haigh works hard to encourage is the adoption of hybrid vehicles, which are incentivised for Salvation Army drivers using a benchmarking system designed to make them more attractive than petrol cars.

"We benchmark on two vehicles, a petrol and a hybrid," she explains. "The petrol is an entry-level Vauxhall Astra. Any vehicle they opt for that is over and above the spec of the benchmark car, they have to pay the additional extra as a monthly or weekly contribution.

"With the hybrid we have chosen a mid-range but reasonably expensive Toyota Corolla. With the hybrid vehicles you get quite a lot within that spec, but again, anything over and above they have to pay the additional extra.

"But they can get quite a few more vehicles within that benchmark, so it is less likely they will pay a contribution. And because it is a hybrid, it is better with fuel economy, it is cheaper on their tax, and you tend to get a lot more spec on the hybrid vehicles."

As a result of this incentive, nearly half of the Salvation Army car fleet is now hybrid, while the car fleet CO2 average is only 100g/km. This is a source of great pride for Haigh, who aims to increase the hybrid fleet share to at least 60-65% in the coming months, especially since she feels the time is not yet right for fully electric vehicles (EVs), although they are likely to join the fleet in future.

She says: "We are obviously keeping an eye on fully EV development, and feel it is currently still a niche market.

"For us it is important that any car we offer will fulfil the requirements of the vast majority of fleet drivers.

"Fully electric is not there yet, but once the mileage range, cost and infrastructure supports our fleet needs, we will start trialling."

The Salvation Army fleet is leased, rather than outright purchased, from two leasing companies and all on 36-month leases. This is a
long-standing policy, which Haigh says returns the best results from a cost point of view.

"Then of course the cars are on a rolling three-year contract, so after three years we just send them back and order new vehicles."

"I have a lot of direct contact with most manufacturers," she confirms. "We have regular meetings to keep up to date with what is going on, any new vehicles, any changes. We do have a number of our own nominated dealers as well, so I am in regular contact with them."

Haigh says this constant communication helps to take advantage of the financial benefits afforded by the Salvation Army's charitable status.

"We have direct support terms with many of the manufacturers," she explains. "Basically, where we are a charity we can have support discount on our vehicles when we lease the cars.

"We use Crown Services, TPPL and direct terms. With direct terms it is normally 1 or 2% more than we get with TPPL, which means we get cheaper vehicles, cheaper lease costs.

"It is one of the benefits of being a charity, you can get bigger support from the manufacturers, which is good."

Haigh has worked in the Salvation Army's fleet department for 14 years, and it is perhaps a sign of how tumultuous the fleet industry currently is that when asked what the biggest changes have been in that time, she names two very contemporary issues.

"Currently, it is the WLTP issue," she says. "A couple of years ago there was the start of WLTP testing and the market closed for several months, which caused a massive backlog, and now full WLTP comes live from April, with real-world CO2s and costs, which is going to be a massive challenge.

"And then there is Brexit. That is going to change a lot of things with the insurance, how you can drive abroad, and the cost of the vehicles."

Beware sole suppliers: Don't let any supplier convince you that they will save you money if you eliminate the competition and give all your business to them. It may look competitive at first, but in a fairly short time uncontrollable price creep will win and you will be paying more than you should. If you have other outsourced services that are better provided through a sole supplier, fair enough, but don't believe you are getting these services free - you are paying for them through the increase in your cost base from elimination of competition.

Never be afraid of a challenge: The fleet world is full of big challenges; the personal achievements at the end of those are the most rewarding. The tougher the challenge, the greater the rewards/achievements!

Know your vehicles and your drivers: What may work for one fleet may not work for another. Don't just follow trends, work with what is right for your fleet.

Keep abreast of legislation: This is imperative in fleet, as changes happen frequently in this industry.

Don't be afraid to make decisions: Sometimes they will be wrong ones, but you will learn from them. It is all a learning curve.