Simon Gray is responsible for all fleet and travel operational and sustainability strategies at SSE and tells Rachel Boagey about the fleet's commitment to transition to 100% alternative fuels by 2030. 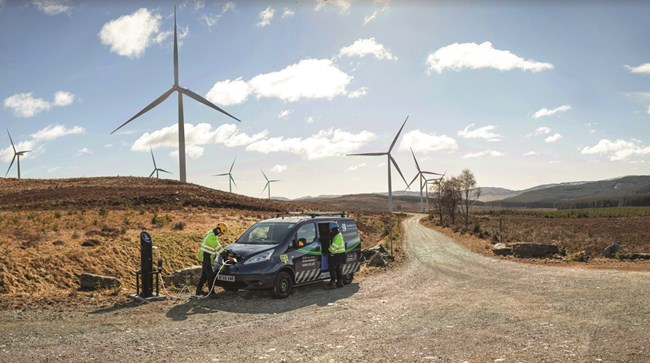 Simon Gray has worked with vehicles throughout his whole career, but didn't start off in a traditional fleet.

From the age of 16, Gray began his working life in the army where he supplied vehicles, it was a natural progression when he left the army 27 years later into something within the automotive sector and joined a facilities management company for six years, working in the fields of fleet compliance and risk, before taking over the running of the overall fleet

Four years ago, Gray took on the head of fleet and travel role at SSE where he has since been working tirelessly to create and implement a net zero emissions strategy for the fleet. "Never before have fleets needed to look so far into the future when recommending business strategies," says Gray.

SSE has responded by undergoing structural and process change, safeguarding its fleet against anything thrown at it by legislators or the relentless pace of technological advancement.

"I joined during a pivotal time because as an energy firm, our core focus over the last few years has been primarily maintaining the critical national infrastructure in the UK, while ensuring our vehicles are operationally fit for purpose and maintained in accordance with," says Gray.

With a portfolio of onshore and offshore wind, solar, developments in battery storage and hydro energy, Gray explains the groups strategy is to drive the transition to a net zero world through the construction and operation of renewable energy assets. It is currently developing Dogger Bank Wind Farm off the coast of Yorkshire, which, once operational, each rotation of a single turbine can power a house for two days.

A commitment to electric

Its focus on renewable energy has trickled down to its fleet which, is ahead of schedule in switching to fully electric with almost half of the cars it operates expected to be battery electric by the middle of 2022 and to transition the fleet to fully alternative fuels by 2030 - a commitment made by SSE since joining the Climate Group's global EV100 initiative.

During the pandemic, SSE's work didn't stop, mostly because of its vital support for key workers and national infrastructure. Instead, within a few days of the country going into lockdown, 10,000 employees were working from home. "We're an office-based company, with operational employees in the field, so to have the agility to achieve that in such a short space of time was amazing," says Gray.

The projects the fleet was working on continued too. "In the car fleet we had a previous model, which was lease cost based, so in mid-2019 we started looking at the car scheme and realised that the only electric cars available were pretty short-range and very expensive, and only available to the highest bands on the scheme, so we transformed to a whole-life costs model, which launched in June 2020.

The whole-life cost model was brought in as an attempt to bring the fleet CO2 levels down while also to enable access to fully electric cars across all of its car scheme bands. The fleet consists of 1,450 cars and, to date, Gray explains that 500 of those are fully electric and on the road with another 305 on order. In addition to those fully electric cars, the fleet also operates 385 plug-in hybrids. Of the 419 plug-in hybrid and electric cars the fleet is waiting for delivery of, the average is just 9.7g/km of CO2. "When we launched the revised scheme, the average CO2 of the cars on fleet was 106g/km of CO2  and now we're at an average of 59g/km, which has been a really great journey to have been a part of and it's continuing to decrease with every delivery," says Gray.

More affordable electric cars are coming to market and Gray has his eyes on the prize. "I use the analogy that if we are looking at electric cars five years ago, they were either very expensive or targeted people who just went to the supermarket due to their short range. Now we're seeing cost parity coming in and affordable cars with 260 to 300 miles of range, far beyond most people's journeys, and these are the cars we're making available for our staff."

Determined not to let Covid-19 impact its electrification push, SSE also rolled out a salary sacrifice scheme in the second UK lockdown. In the eight months since launch there have been 179 orders placed so far , with 65 of those already delivered and 92% of all orders being for fully electric.

Gray says the fleet drivers are reacting well to the electric vehicles and likens the fleet's move to electric to moving from a manual transmission to an automatic. "Once you drive an automatic you never want to go back to driving a manual and once used to it, moving to an EV is the same. The recent fuel crisis in the UK made people question driving petrol and diesel and those already in electric cars were just carrying on with their day as if nothing had happened," he says.

As part of the scheme, the fleet has given drivers a home chargepoint loan as well as offering those in the highest-emitting cars to come out of those cars early if they switch to an EV. Of 400 people invited out of the highest CO2 cars, around 120 have made the switch and one driver in particular has saved around £530 a month in tax - "that's a mortgage payment", says Gray.

Gray says, "It's so important for us that we're not sitting back and waiting for infrastructure to be built for us as it has to align to our own transport agenda. We have begun the installation of charging across our sites but we know that's not the only answer." Gray and his team believes home charging where available, as the primary option to maintain mobility or hub-based charging where home charging is not achievable as the ranges of vehicles will increase as technology develops. There is also a place for public charging networks if they become reliable and affordable, but office and depot charging is a good start as we develop on this journey.

By the end of 2023, SSE will have around 400 chargers live and they're well on the way to 300 by the end of this year across 74 of its sites where vehicles will be based for the most part, with additional infrastructure in more remote locations such as onshore wind farms and sub-stations to maintain as much flexibility as possible. "We believe in creating a backup opportunity to charge at work, but where possible to charge at home with a payment solution to reimburse for energy used and charging hubs in the in-between locations. As the range gets longer, the requirement to charge will become less and less," he says.

The next step for the organisation is launching a trial of a company-wide electricity bill payment solution. "We will pay home energy bills on the behalf of our staff as we believe that is the right choice - we don't want their home energy bills to have a negative impact on their mortgage applications or credit scores."

The overall solution in development is seamless payment for all charging instances ,so that employees will be able to easily charge at home with no financial worries, charge and pay in the office where required as well as at public charge points, and the company will be trialling this over the next six months.

SSE also has a large commercial fleet consisting of 2,000 vans, which Gray says isn't quite yet akin to its transition to alternative fuels. "We're treading a lot more carefully with our van fleet due to the size of them, what we do with them, and the geographical spread," says Gray.

While there will be 50 electric vans on fleet by the middle of 2022, the perfect electric van for the SSE fleet does not exist yet, but Gray holds out hope. "I believe a commercial vehicle that has the range we need is coming, but maybe it's not electric - it could be hydrogen or another fuel source - but either way I believe that alternative fuelled commercial vehicle we're waiting for will hit the market in the next few years."

A large part of SSE's operations are within remote places such as the Scottish Highlands, which came to the fore when the area was severely recently impacted by Storm Arwen.

Within his role, Gray also runs plant and the travel operation, so during the storm the network operational teams deployed over 700 engineers into the locations as well as the groups own travel team, so finding accommodation for these engineers as well as families who had suffered damage threw up further thoughts to how they may operate electric vehicles in locations where there was no power.

"This is a concern if we are to rely on electric vehicles for future operations, as we will need range to enable flexibility where charging infrastructure may not be available," says Gray. Lots of government legislation and policy needs to be brought forward in the EV charging world if we're going to see success," he says. We're just waiting for the product to come so we can make the transition on the next phase of our replacement schedule to meet our targets."

The question for Gray is always: how does he make fleet and travel work together to be more efficient?

"The reason travel is under my remit is that we try to bring both elements together. Is it a car, is it a mobility allowance? Is it hydrogen? We don't fully know that yet, but we have to be ready," he says.

The thing that harnesses fleet and travel all together is data - one of the company's biggest triumphs. When SSE brought in an external data company to harness all data for driver behaviour, efficiencies around fleet utilisation and bespoke reporting, everything changed. Drivers now receive text messages revealing their telematics scores on speeding, acceleration and harsh driving, and the information is also given to the managers to take action or praise where suitable.

Fuel monitoring and reporting has been particularly successful with the ability to guide drivers into the most cost-effective fuelling locations and reductions in events such as excessive idling has seen a reduction in cost and increased fuel economy of over 15%.

The future, according to Gray, is green - no matter which alternative fuel it's powered by. Whether hydrogen, electric, or something different altogether, SSE wants to be at the forefront of any alternative fuels, but it's something that needs to be worked on by everyone, he says. "We need to join forces with other industries rather than as individual businesses and countries, areas or cities," says Gray. "Right now, we're well on our journey to an electric fleet and it's been such an exciting ride, and we're even more excited to see what the future holds for alternative fuels and our Net Zero commitments."