Rachel Boagey speaks to Monica Guise, director of facilities for the largest university fleet in the UK, about her holistic approach to a sustainable fleet. 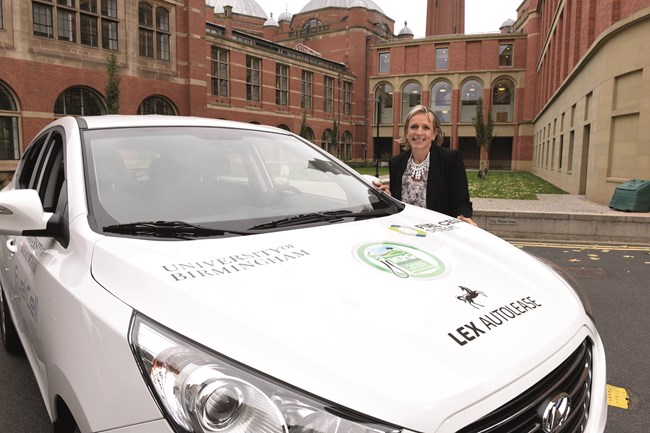 Monica Guise began working at Birmingham university in 2006 as the postal services manager, a role which morphed into post, portering and transport manager. Her dedication to the university's transport system led to a promotion to head of sustainable logistics in 2018, where she took an inclusive approach to all of the university's business travel, including flights, trains and commuter travel across the city. In 2019, Guise was promoted to her current position as director of facilities.

With around 9,000 staff and 35,000 students, Guise describes the University of Birmingham as a "little council". She believes the choice of transport used by the institution has a big impact across the entire region.

For this reason, Guise has made huge efforts to greenify the entire university fleet, securing its status as one of the most sustainable fleets in the UK. Working together with university research departments, Guise has been able to pioneer new initiatives to drive the institute's green agenda, including sustainable travel and waste management options, reducing its CO2 footprint and costs. "Working with the city of Birmingham, we are making a real impact on tackling the institute's environmental travel, post, waste management, exports and car parking," she explains.

This holistic view to transport and travel places Birmingham university way ahead of other institutes in the country, Guise explains. "Some universities will have various departments all running vehicles but lack an overarching fleet manager or view of its transport as a whole. Some don't even keep track of how many vehicles are on their fleet," she explains.

Guise tells us that the University of Birmingham's fleet manager, Chris Lane, ensures the institute centrally manages every means of transport in and out of campus via a team of three transport assistants. "They manage, maintain, and service the vehicles and software that looks after the whole fleet, so that all of the data and mileage from every hired vehicle, coach trip, plane journey, train or taxi ride is being collected," says Guise.

The car and van fleet, which consists of 105 vehicles leased from Lex Autolease, runs a successful salary sacrifice scheme for staff promoting ultra-low emission vehicles and EVs, in which staff can charge their vehicles in a car park consisting of 3,500 spaces. It was also the first fleet in the country to pioneer the use of hydrogen fuel cell, electric and diesel vehicles concurrently.

"The innovation in the fleet is all part of our sustainable strategy and I think a lot of universities will be following our lead," explains Guise, who says the biggest goal of her job is reducing carbon emissions of the university's transport network.

"We're constantly looking at the fleet and assessing how it can be greener. When we replace a vehicle it has to be replaced with an electric vehicle and if it's not, the question 'why not' is asked. To be honest though, at first it was me saying, 'electric vehicles are your first choice, you have to tell me why you can't have an electric vehicle,' but that doesn't have to happen now. Electric has naturally become the first choice for most drivers."

Something that makes Birmingham university's car and van fleet unique is its mileage, which on average is around 8,000 miles per year. Some vehicles are responsible for maintenance, lighting or food, for example, driving as little as 600 miles per year as they stay around the campus.

This low mileage allows the fleet to experiment with ULEV technology, perhaps more so than a fleet with higher annual mileage. In total, 52% of the fleet consists of ULEVs at the moment, which Guise is extremely proud of. "The government has just released a document with one of the key priorities being that by 2025, 25% of all government vehicles will be electric, and clearly we're well ahead of that. We're trying to lead by example," she says.

This philosophy of leading by example is something Guise takes seriously, previously introducing a lift share scheme to encourage university staff to share cars when driving into campus. Unfortunately, this was a victim to Covid-19, but something Guise hopes to reintroduce soon. Guise also used the salary sacrifice scheme to purchase an EV. "I bought a Tesla, which I often lend to my kids as I'm a believer that once you drive an EV the barriers to ownership, such as range anxiety, become less significant."

While most vehicles remain around campus on a daily basis, and some staff are able to commute via the train when they leave campus, there are some cases in which vehicles are required to travel further afield. In this case, they often require more miles than electric cars can currently promise.

For instance, some vehicles are allocated to student recruitment or are required to travel to the Birmingham Institute of Forest Research in Nottingham for research purposes. But the fleet's use of diesel was causing issues too. "As the cars spend most of their time on campus, the big drawback we were seeing with diesel was the particle issue. Driving around in circles just wasn't working for these vehicles and unfortunately they were beginning to clog up, costing us money on maintenance and repairs," explains Guise. "That was a good driver for us to invest in EVs, but also hydrogen vehicles too when EVs don't work well for the job required. For example, security vehicles need to run 24/7 and there can't be any downtime so EVs just aren't right for the job," says Guise.

In 2016, the university became one of the first organisations to take delivery of the Hyundai ix35 hydrogen fuel cell vehicle, which was used across the city to manage services and deliveries. Despite hydrogen being a perfect technology for some of the university's vehicles, the hydrogen refuelling station on the university campus fell into disrepair. "We ran a hydrogen vehicle for five years, but we then had problems with our refuelling station that weren't fixed, resulting in us giving up on hydrogen. It was a real shame but the industry really needs to work harder to make hydrogen work."

A particular challenge the fleet has encountered when it comes to this is with drivers who require their vehicles to move their equipment around campus. "Carpenters are a good example of this," says Guise. "People working in this role have all of their equipment in the back of their vehicle and doing their job without a vehicle was previously thought to be impossible, or perhaps they were doing it in a diesel vehicle because of the payload - but now we're thinking smarter - that equipment actually needs to be available to the carpenter at different location across the university, and the vehicle can be used just to transport
the person."

A multitude of benefits

Although electric vehicles have created a few challenges for Guise and the fleet, the technology also offers up a whole host of benefits. Reducing fuel costs is often the primary goal of a fleet manager, but Guise explains that actually, the fuel costs of her fleet are already pretty low, due to the electric vehicles already on the fleet. "We often get a call from a supplier saying 'I can reduce your fuel costs if you make more of your vehicles electric', but our fuel cost is so low due to our low mileage that we are now more focused on the added benefits that we get from electric vehicles, including a reduction of accidents as people are more careful when they drive them. Electric vehicles have also proven less problematic than diesel for the fleet as they aren't constantly running into a diesel particle issue.

"Considering whether a technology is viable for us considers all of these factors. Sometimes we might get funding for these vehicles, which is great but others we have to invest in the technology because, as a university, we have to lead the way. We might be well ahead of the recommendations by the government but so we should be - we need to use our unique transport network here at the university to push government recommendations further and make our country greener," says Guise.

The university has introduced various green initiatives including car clubs, electric scooters, and a bike programme with a bike doctor on campus. It also works with the local authority and National Express to get discounts on rail travel. But still, the car park was overflowing with personal vehicles. Like many fleets, however, Covid-19 has significantly impacted the make-up of the university's fleet. "We had to reissue cars from departments that were not travelling during restricted operations to service critical areas, such as security and cleaning services, who previously had to share their cars with a colleague but couldn't share during the pandemic," says Guise.

Now the challenge is to try to encourage people who are commuting to use shared or public transport, rather than their own vehicles again. "Our car parks were busy before Covid-19 and now they're around two-thirds full. So we're in a much better position, but now need to encourage people to change their ways. However, I do believe our fleet will reduce because we're looking so hard to find better ways of managing how we get places."

The ability to charge electric cars around campus and knowing how much to invest in doing so is a challenge for Guise and her team. "We used to give out free charging that anyone could use, however, this was unsustainable and once we started charging, the demand went down considerably. Something I've learned is that most people commute five to seven miles to get to work, so when it was free they were just topping up because it was there and available. Now there's a charge for the service, they charge at home. It's been a case of finding a balance as we don't need to install more chargers if they're not going to be used."

Ultimately, Guise would like the university fleet to be entirely electric, but infrastructure and large commercial vehicles continue to throw hurdles in her path. Instead, Guise plans to continue to shift her focus to introducing as many ULEVs onto the fleet as possible to stay ahead of the government regulations and inspire other fleets to do the same.