Covid might still be with us, but Aston Barclay has adapted. Managing director Martin Potter talks to Martyn Collins about fitting into the "new normal". 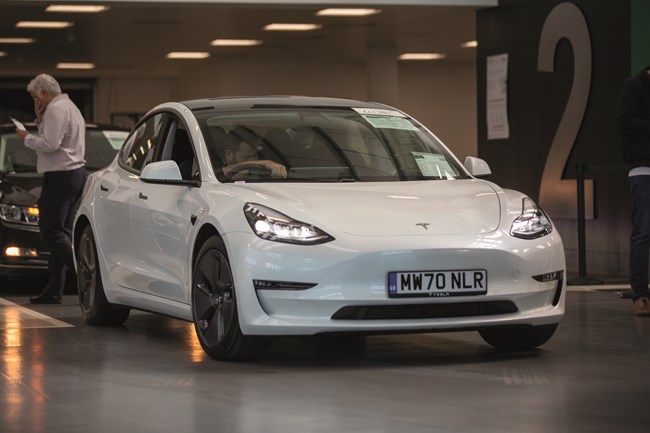 Aston Barclay's Martin Potter thinks there were about 140,000 fewer ex-fleet vehicles in the marketplace in 2021.

"That is because we're running on 30% less new car supply, and most fleets are on 30-35% contract extensions," he says. "Also, most fleets are reporting almost up to a year's worth of order book, sitting in the bank waiting to be supplied."

Not all manufacturers are affected though, as Potter tells me it appears that Hyundai, Kia and Tesla, and some smaller manufacturers such as MG, have a small amount of new stock about.

"Most of the European manufacturers are discussing not being up to full production until the summer, that's being brave," he explains. "Let's face it, they're going to satisfy their retailers first, in terms of what volume they want. Then, they will work through the massive backlog of fleet orders that are sitting there. Eventually they might get round to rental, but I'm not convinced they will. I think that by the time they get through that mound of order bank, we will almost be on a rolling annual order bank, quite frankly."

Potter thinks the used car market will maintain some strength for the next few years. "There were 1.4 million fewer vehicles registered just in the last two years, and those cars are never coming back. I think there are going to be the same supply and demand issues in used cars - even when we get some supply back into the market.

"Our used-fleet pricing, which we call a 20-54-month age profile, went up from the first quarter to the end of 2021 by 40.8%. Our average prices achieved in that sector have been 10% more than CAP, and we're really pleased to have beaten the market and our customers are very happy with that."

Potter says that although the average age of cars has not moved much since Q2, mileage is on a trajectory downwards. "Average mileage is now in the late 30,000s," he says. "It did have a slight increase in Q4 from Q3, but I think all that is, is the creeping up from contract extensions.

"The average age profile will change over the coming months as new car supply comes out. I don't think we've yet seen the cars that have been extended, because of the new order. I think the cars we're seeing are still coming in on a normal cycle, and they've been able to get new supply to replace them. So, it wouldn't surprise me if the average age crept up to 42, 43 or even 45 months."

Potter tells us Aston Barclay is looking at the mix now, with all the news about battery-electric vehicles (EVs) and alternatively fuelled vehicles, from a new car registration point of view. "In the wholesale market, diesel represented 48% of our total mix, with battery electric and alternative fuels still only 4%," he says. "EV-only was 0.8%, and 3.2% were hybrid models. Our fleet volumes in terms of mix went down by about 12% last year as 2019 and 2020 were just the same really." Potter is pleased with this, bearing in mind that the fleet sector was down by 30%. "While it's only 4% overall, I'd say it's common now for fleet customers to have somewhere in the region of 15-20% of their mixes that are hybrid or battery electric. I can see that happening very quickly, in the next 12 to 15 months, becoming close to 50% of their volume."

Previously, the company's Insights Report lumped the alternative fuels together, but, for the first time, in Q4 it split up battery electric and hybrid. "This is because the hybrid stock has been out there since 2009, and the average profile is very similar to fleet," Potter explains. "It's 40 months old, 30-odd thousand miles, and it has an average price of £18,500. Battery electric on its own is a totally different profile. It is 15 months
old, around 10,000 miles and it has about £28,500 to £30,000 worth of average sale price.

"Putting it all together was really distorting the overall pricing. You've got a longer standing hybrid market, that's been about for a while and then you've got a new emerging battery electric market that we're showing in two separate areas."

Aston Barclay took a very different approach in April last year, when everything opened back up. "We're very grateful to our equity owners. We told them we wanted
to add 25% to our overheads to employ more staff for us to run physical sales again, which our customers wanted. This was when our competitors were going the other way."

The company is still taking on the cost of prepping the cars for fleet. "I've been pleasantly surprised at the buyers coming to see those vehicles and it's mainly been interest from car supermarkets. By viewing them, several buyers have reported back to us, they've bought at least another 20 or 30 cars that they would have discounted if they had just been online. Our leasing customers have said, when they compare us against our peers, we've consistently converted 12% more in our fleet sales this year."

Another area in which Potter feels Aston Barclay succeeded over the past year is the development of its timed auction platform, allowing it closed capability. "Late last year, we digitised the PCP return process for Vauxhall finance - one of our customers.

"Now we've done that for Vauxhall, we're working on similar platforms for other manufacturers," he says. "We're also running closed sales for them, exclusive to the network and utilising that product for some of our major dealership clients too. They can serve themselves with potential retail stock.

"So, what has changed is that we are running four or five bespoke remarketing strategies for fleet customers - rather than just one or two remarketing opportunities for them."